2015 Draft Re-Do: What if the Knicks Never Selected Kristaps Porzingis? 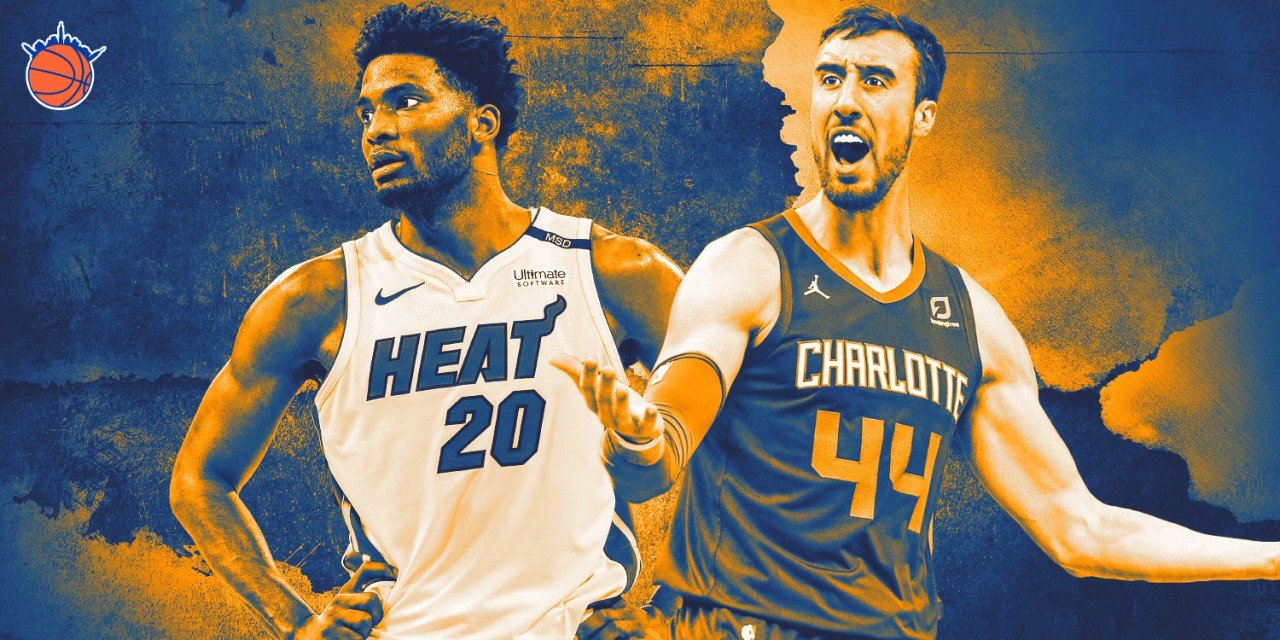 The 2015 draft brought then Knicks president Phil Jackson his saving grace in Kristaps Porzingis. Then it all went wrong—for all parties. Would things change if New York picked someone else at four?

In the third entry of our draft “what-if” miniseries, we look back at 2015’s NBA draft and see where the team would be if it didn’t select Kristaps Porzingis with the fourth overall pick.

Time is a flat circle.

After blowing up the roster due to a woeful start and shutting down Carmelo Anthony for the second half of the 2014–15 season, then-Knicks team president Phil Jackson had one goal in mind: tanking.

With only six games remaining in the season, New York’s operation was nearly complete. The Knicks held a one-game advantage over the Minnesota Timberwolves in the race for Karl-Anthony Towns. In prime position to have the top lottery odds of 25%, New York proceeded to win three of its final six games, including two of its last three games to end the season with one more win than Minnesota.

With the second slot in the draft lottery, the Knicks still had plenty of optimism heading into the drawing. The 2015 draft class was widely regarded as one with three players who significantly stood above the rest of the class: Towns, Jahlil Okafor, and D’Angelo Russell.

Still receiving bad karma for possibly (probably) having the 1985 draft lottery rigged in their favor to select Patrick Ewing, the Knicks fell to the fourth pick on lottery night, all but ensuring they would miss out on the draft’s big three. This result obviously left the Knicks and their fan base upset, and most notably elicited a hilarious, all-encompassing reaction from then-GM Steve Mills.

Thanks for those wins, Tim Hardaway Jr. Now your ass is getting shipped to Atlanta.

Speaking of ass, the pre-draft process in 2015 gave many Knicks fans pause and trepidation, largely due to Jackson’s perceived fixation with booties over any other quality in big men. Phil was rumored to be enamored with Okafor, preferring him over KAT largely due to his behind.

While Towns was clearly a superior player and better fit for the modern NBA, Okafor was a traditional post-up big whose play style clearly contrasted with where the league was heading in real time.

The Golden State Warriors were in the midst of their first championship run since 1975, dominating the league largely due to their use of the three-pointer. Meanwhile, Phil was busy questioning the obviously effective strategies deployed by teams at the top of the NBA.

NBA analysts give me some diagnostics on how 3pt oriented teams are faring this playoffs…seriously, how's it goink?

Despite the rumors, chaos, and typos, we eventually got to draft day, and the Knicks stayed at four to select our formerly beloved tall Latvian child, Kristaps Porzingis. A lanky, skinny seven-foot-three European, Porzingis was immediately greeted with a New York welcome, receiving vociferous boos from the Barclays Center crowd and immediately drawing comparisons to every white European big imaginable, no matter how incomparable his game was.

The poster child of the Knicks’ ire was this crying kid, who apparently still hasn’t learned his lesson, as he was seen booing New York’s selection of Kevin Knox only three years later.

In hindsight, Phil likely took the best player available in the 2015 draft after Towns, and assuredly took a top-three player in the draft class. Despite being the Knicks’ best draft choice since Ewing, Porzingis didn’t even last through his rookie contract in New York, eventually getting shipped to Dallas to build more cap space while New York was in the midst of tanking. Sound familiar?

With that said, let’s take a look at a few players who could have reasonably been selected at number four instead of KP.

Ah, another tall white big man with a penchant for the three ball! Leading Wisconsin to a National Championship appearance against Okafor’s Duke squad, Kaminsky was named the NCAA Player of the Year for his contributions in the 2014–15 college season.

With a game so slow that there were many conceivable questions regarding his athleticism and ability to fit in a pace-and-space oriented NBA, Kaminsky profiled as the perfect prospect for Michael Jordan, given his draft history. The other key member of the Bulls’ dynasty valued Frank the Tank highly, passing on an offer of four first-round picks from the Celtics to take him.

In his first four years in the NBA, Kaminsky has put up stats that are similar to KP’s time in Sevilla, Spain. Frank has averaged 9.8 points, 4.0 rebounds, and 1.6 assists per game on an inefficient 42% shooting from the field and 35% accuracy from downtown. He shot a career-best 46% from the field last season but has yet to become a mainstay in the starting lineup for a Charlotte team largely devoid of talent aside from Kemba Walker.

Defensively, Frank has yet to make any positive impact at the next level, failing to average more than 0.6 steals or blocks per game in any of his four seasons.

Selecting Kaminsky at four would have been a miserable reach for New York, as his career has played out how many Knicks fans envisioned the selection of Porzingis would go.

Another player highly linked to New York leading up to the draft was one of current general manager Scott Perry’s two reclamation projects from the 2015 lottery. The Knicks’ rumored interest stemmed from Mudiay’s size as a 6-foot-5 point guard—ideal for a lead guard in Phil’s cherished triangle offense.

Playing his lone season out of high school in China due to a falling out with SMU, Mudiay, like KP, was a mystery man entering the draft. Despite being a noticeably more flawed prospect, Mudiay is neither a big man, skinny, white, nor European, so he received far less detraction during the pre-draft process.

Eventually selected by the Nuggets seventh overall, Mudiay was both an incredibly inefficient scorer and poor facilitator in Denver, rendering him pretty useless as a starting point guard in the NBA. While seeing his minutes per game decrease every year with the Nuggets, Mudiay averaged 11.1 points, 3.1 rebounds, and 4.3 assists on a dreadful 37.5% field goal percentage before getting shipped to New York in 2018. Basically, Denver Mudiay’s player comparison is Frank Ntilikina with a more aggressive mindset and without any defensive ability.

Now with the Knicks, Mudiay has become a more proficient scorer, but still is not efficient enough to be a passable starting point guard in the NBA. If Mud were the selection in 2015, plenty of hype would have been generated about the Knicks finding their point guard of the future, only for him to become a fan non-favorite pretty quickly.

Okafor’s sidekick during their National Championship run as one-and-dones at Duke, Winslow was highly touted as a relatively safe prospect outside of the top three due to his defensive versatility, with upside as a potential point forward due to his I.Q. and savviness.

Winslow wound up falling to the Miami Heat at 10 and has developed his game steadily under the tutelage of Erik Spoelstra and Dwyane Wade. While incredibly raw on offense entering the league, Winslow has grown to average 12.6 points, 5.4 rebounds, 4.3 assists, and 1.1 steals per game as Miami’s ultimate glue guy in the 2018-19 season. A key marker of his improvement is rising his three-point percentage to 38% on 3.9 attempts per game this past year.

Winslow has proven capable of playing one through four on both ends of the court, earning the nickname Justise Better as an adapter of position-less basketball.

Selecting Winslow fourth would have been worse than taking KP from a talent perspective, but would have helped ‘Melo become more efficient in the waning years of his prime. Winslow conceivably could have checked the worse of two forwards defensively, pushing Anthony to the 4 offensively and giving New York a more modern lineup on the wings.

Then again, knowing the Knicks, it is equally plausible that they would have pushed for Winslow to be an off-guard, sending his development down the path of Ntilikina.

Overall, the Knicks still managed to make the right pick in the 2015 draft, even if they completely mismanaged leverage in Porzingis’ exit from the team.

Yes, we are currently in a brief window of optimism with plenty of cap space and draft picks to boast while Kevin Durant and Kyrie Irving are expected to hit free agency, but the Knicks’ lack of understanding negotiating power in dealing with KP should not go unnoticed. Porzingis declining the qualifying offer coming off a torn ACL as a player of his caliber would have been unprecedented, and New York should have called his bluff.

Alas, Phil Jackson still made the best selection possible to start the 2015 draft, and other potential selections aside from maybe Winslow would have only accelerated Phil’s exit from New York and the Knicks’ plunge into another rebuild. Given Porzingis’ talent in relation to the other players rumored to have piqued New York’s interest, both Phil and the Knicks would have likely been far worse off if they made a different decision on draft night.