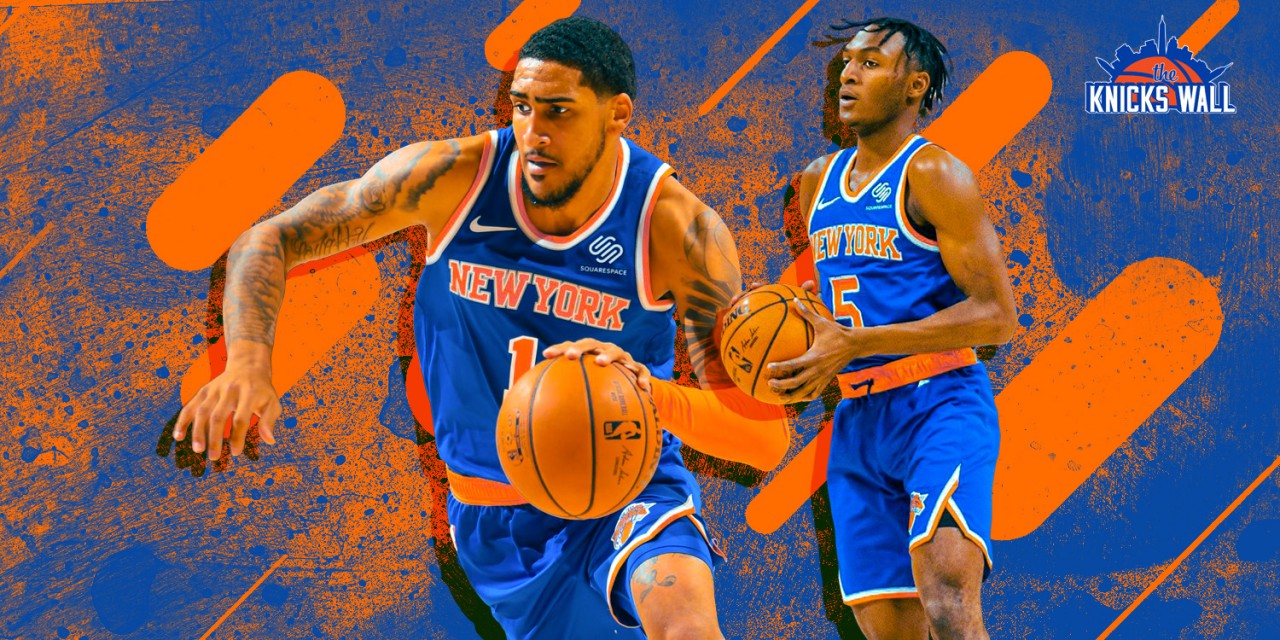 What should we expect to see from the Knicks’ three rookies this season, and how much run will Tom Thibodeau give them?

Historically, Tom Thibodeau has not been charitable to rookies.

Over his seven-plus seasons as an NBA head coach, he has rarely given consistent minutes to first-year players and never spots in the starting lineup.

In his first campaign in New York, Thibodeau may be unable to avoid granting at least one, if not two, rookies roles in the rotation. That would be a good thing.

Powell will likely start in the G League, but Toppin and Quickley will vie for significant roles. Both have already impressed Thibodeau with their work ethic and preparedness amid the condensed preseason.

Despite Thibodeau’s “Win Now” philosophy, the Knicks are projected to win 24.7 games, per ESPN’s system. Once again, player development will be the priority, and, without ensconced veterans or All-Stars eating up minutes, Toppin and, eventually Quickley, should see plenty of run.

After two preseason games and with two remaining before the December 23rd opener, let’s ponder what to expect from the neophytes.

If the first two preseason games are any indication, Toppin will begin his career as a spark plug for the second unit.

The 6’9″ high-flyer—who averaged 20 points and 7.5 rebounds per game and won multiple player of the year awards for Dayton in 2019–20—brings a polished and explosive offensive game.

In his debut on Friday, he flashed the sizzle and skill that made him a lottery pick (and caused Mike Breen to excitedly call him “as ready to play offensively” as any almost any rookie). In 20 minutes, Toppin dropped 11 points on 4-for-9 shooting and grabbed seven boards. He showed off his post-up game, his underrated vision, and welcome chemistry with Kevin Knox.

Sunday was a different story. He shot 1-for-9 from the field in 24 minutes, and admitted to “rushing” to keep up with the speed of the game.

Like seemingly every player who enters the Association nowadays, Toppin’s ability to make threes will be paramount. He shot 43% from downtown for his college career, and the Knicks are hoping that translates to the next level. Toppin made just one of his eight three-point attempts over the two Pistons games, though the fact that he was willing to let it fly is encouraging.

Obi Toppin isn't afraid to shoot from deeeeep. He's short on this 33-foot 3 after hitting his first 3 a minute earlier. Toppin trying to be a vertical and horizontal threat for the Knicks. pic.twitter.com/88o2lCh3QE

One nice feature of Toppin’s game is his ability to thrive both in transition and in a more plodding, halfcourt offense, like Dayton’s. Thibodeau’s teams are typically amongst the slowest in the league, though he intends on speeding things up this season (we’ll see).

Toppin’s lack of positional versatility is concerning and could limit his role for now. He lacks the lateral quickness to defend small forwards, and he struggles in pick-and-roll situations. Mitchell Robinson and Nerlens Noel have claim to the center spot and are necessary cover for Randle and Toppin, rendering the rookie stuck as the backup four, for now.

Plus, his shortcomings make him nearly impossible to play alongside Julius Randle. The two played one minute together on Friday, and Thibodeau admitted that pairing may not be feasible.

“I think we’ll be fine offensively,” he told The Athletic’s Mike Vorkunov. “This big concern there is of course the defense. Figuring out who the other three players are there along with them is a big part of that.”

Like Robinson and Noel, Toppin excels at rim-running. One thing to watch this season will be how much the Knicks staff and point guards are able to get him in pick-and-roll situations while he’s on the court with Noel or Robinson.

Toppin has lightyears to go on defense, and his ability to hold his own on that end could influence how many games he’s given the chance to finish (you know, assuming the Knicks are in a few close games).

It’s natural to be alarmed at his lack of defensive instincts at age 22, but he’s always been a “late bloomer,” as he writes in his wonderful piece for The Players Tribune. According to the New York native, “basketball still hadn’t really clicked” for him until late high school.

And look: Thibodeau was able to make Carlos Boozer a serviceable defender, so perhaps he can find similar success with Toppin. That’s precisely why they pay him the big bucks!

Ultimately, the Knicks drafted Toppin to be a starter, and how soon Knicks fans will get to see that will depend on—more than anything else, including defense—if and when Julius Randle is traded.

Ideally, Knicks fans will at least get a chance to see Toppin in the 2020 dunk contest, if not the starting lineup.

OBI WITH THE FOOTY ASSIST 🔥 pic.twitter.com/uKDTg1rfcC

Quickley’s playing time could be one of the more interesting under-the-radar Knicks storylines to monitor this season.

But, he was also a projected second-round pick for whom the Knicks arguably reached, perhaps—and I’m just speculating—in part because he attended the University of Kentucky.

Regardless, the Knicks needed to add floor-spacers as much as any team in basketball, and Quickley fills that void, even if he hasn’t shown it in games yet.

After not playing on Friday, Quickley saw his first nine minutes of action on Sunday. He entered in the second quarter, going 1-for-3 from the field and missing his only three-point attempt.

“[He had] some jitters early on,” Thibodeau said afterwards. “He’s not afraid of competing. We didn’t see him shoot the ball. He’s a knockdown shooter. We like to see more of those. We see him do it in practice all the time. When he raises up to shoot, you think it’s going in.’’

Quickley has no shortage of confidence, so I wouldn’t expect the hesitancy to continue for long.

“But I love his enthusiasm,” Thibodeau added. “Great work ethic. Great student of the game. He’s in early. He stays late. He comes back at night. He does all the things that you would like a rookie to do.”

Furthermore, Quickley was one of the best guard defenders in college hoops last season. His intensity and communication skills were lauded by his Kentucky teammates, and his 6’8″ wingspan has allowed him to handle bigger guards to this point. He is not a turnover-creating machine, but neither are Thibodeau’s squads, usually.

His functionality as a playmaker could determine the size of his role—and his ceiling. Quickley isn’t known for his handle or offensive orchestration, and finishing in the lane is a weakness. But, he’s a smart kick-out passer, and if he round out his game, serviceably hang as a lead ball-handler, and create looks for others (in addition to off-ball spacing), he could emerge as the Knicks’ top two-way point guard.

“Being able to use those angle pick-and-rolls, getting into the lane, creating for myself, creating for others and then being able to play with other great guards because of my shooting ability and also on defense,” Quickley said. “Just playing hard each and every possession, I feel is going to be big for me.”

At the moment, Quickley is jumbled with Elfrid Payton, Dennis Smith Jr., Austin Rivers, Alec Burks, and Frank Ntilikina on the depth chart. But, the rookie has already established himself as a Thibs Guy, and that could soon be reflected in his minutes.

Powell is a long-shot to make the roster, and will probably spend most of his 2020–21 season with the Westchester Knicks. Don’t entirely count him out, though.

The 6’2″, 23-year-old shooting guard has been underestimated and overlooked every step of his basketball journey, and he’s consistently proven people wrong. The Trenton native was lightly recruited out of high school before attending Seton Hall. He averaged 20-plus points per game over his final two seasons, set numerous school records, and was named to the 2019–20 All-American First Team and won Big East Player of the Year.

Local guy Myles Powell is set to join the Knicks

Yet, the undersized scorer went undrafted on November 18th.

“This is my story. I’ve always kind of been the underdog. I needed that, “Powell told Newsday about being undrafted. “They say sometimes in life when you get things handed to you, you take it for granted. I’m blessed to be in this situation. A kid coming from Trenton, I shouldn’t be here anyway.”

The Knicks signed him to an Exhibit 10 contract, enabling him to participate in training camp before presumably heading to Westchester.

“The goal is to always get a roster spot,” he said about his training camp mentality. “But I came in telling the organization, whatever they needed me to do, I was willing to do. If that’s staying in the G League a little bit, if that’s what they think is best for my career, then that’s what I’m going to do. I’m a kid that listens and I get better. I come in every day with the same mindset that today I’m going to get better than I was yesterday.”

Powell can improve his shot selection and passing, but his all-around offensive game is more polished than Quickley. When they faced off in December 2019 at Madison Square Garden, Powell’s 28 points led the Pirates to a thrilling 84-83 victory.

“He carried that team their whole year. I think he had like three points going into halftime and he finished with like [28], so that just shows you what type of confidence he has in himself, he’s never gonna quit,” Quickley said about Powell after the game.

Simply put, Powell is a bucket. He offers an intriguing catch-and-shoot game (35% from three in college), and possesses a more threatening one-on-one game than his physique may assume. He won’t score as easily in the NBA, though, and he will need to find a balance between a score-first approach and the role of a more traditional point guard.

“When we look at the point guard position it’s being redefined in some ways,” Thibodeau said. “We’re seeing a lot of scoring point guards. And so you also look at a guy like Derrick Rose when I had him in Chicago, he combined both power, speed and he was an attacking guy going downhill. I think Russell Westbrook was similar. … When you look at all the point guards now in the league most of them are scoring point guards that are very effective in pick and rolls.”

Due to his slow feet and size, his on-ball defense is far from NBA-ready.

If he can earn a two-way deal mid-season, he could see some late-season run. Considering Powell’s history of outperforming expectations, I wouldn’t bet against it.

Clearly, Thibodeau is a fan of all three youngsters, and with good reason. Each rookie possesses NBA-ready aspects to his game and Thibs-ian work ethics, along with plenty to learn.

Hopefully, the veteran head coach—who values practice almost as much as game-experience, in terms of player development—will give the neophytes opportunities to validate his early praise.