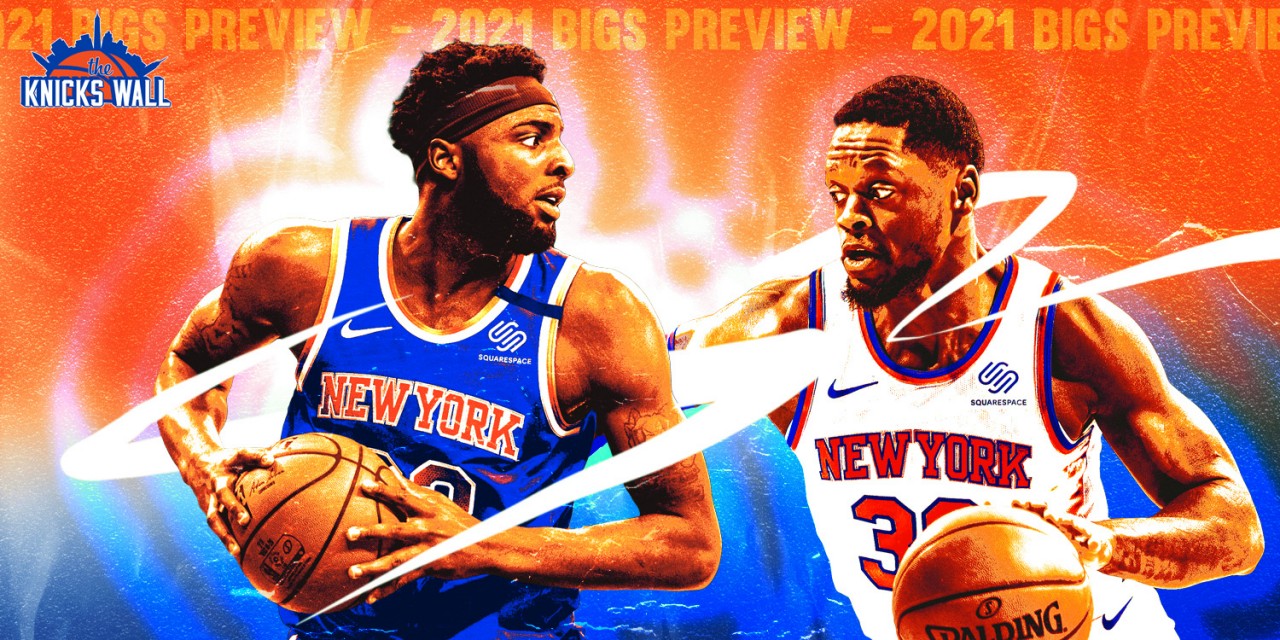 The Knicks’ offseason strategy for the frontcourt was radically different than in 2019, including drafting a power forward (Obi Toppin) and a more coherent plan than last season’s crowded rotation.

Last offseason, the frontcourt was a point of contention for the New York Knicks. After missing out on various big free agents, the Knicks added several big men to the roster: Julius Randle (three-year, $63 million), Taj Gibson (two-year, $20 million), Bobby Portis (two-year, $31 million), and Marcus Morris (one-year, $15 million) were added to create a rather bloated frontcourt. It resulted in Morris playing mostly small forward, with other talents being shut out as Randle, Gibson, and Portis manned the two big man spots.

This offseason, the Knicks cleaned up their big men rotation, creating a foursome of different talents, with one wild card talent on the outside looking in.

We’ve gone in-depth with Mitchell Robinson in a post the other week. In short, Robinson has a chance to take a true step forward as he enters his third season with New York. The weaknesses are there—Robinson is a poor defensive rebounder and needs to improve on his conditioning. That said, Robinson is an elite shot-blocker, an athletic rim-runner, and someone the Knicks should offer a contract extension before the season starts.

The one area we broached but didn’t discuss in detail—the ecosystem. Darren Erman, one of Tom Thibodeau’s new assistant coaches, has a history working with several talented big men throughout his career as an assistant coach, while Thibodeau himself has had a history working with talented defensive big men like Joakim Noah and Taj Gibson. Working and figuring out how to fix Robinson’s weakness could benefit the Knicks in the longterm. With Nerlens Noel as his only competition for the starting center role, Robinson ultimately has a chance to take the next step forward in his career.

After signing a three-year, $63 million contract, the wheels quickly fell off for Julius Randle. Even though he finished with stats that resembled his career numbers, Randle struggled defensively and his three-point shooting cratered, going from 34.4% with New Orleans, to 27.7% in his first season with the Knicks. Fans weren’t happy with Randle bringing the ball up, jab stepping, and spinning into the lane. It was a rough season for Randle, rough enough for many to believe the Kentucky forward would be one-and-done in New York.

But as the preseason starts this week, Randle remains a part of the roster and New York has talked up a better sophomore season for the six-year veteran. The fit with Robinson in the frontcourt remains sticky, with neither player able to provide much stretch for the other. Still, Randle offers an offensive threat with solid playmaking abilities. With an upgrade in coach and personnel, perhaps the Knicks can figure it out in year two.

That, or the Knicks will go back to the drawing board, starting with shopping Randle.

One of the biggest surprises this offseason was New York signing Nerlens Noel on a one-year, $5 million deal. Center wasn’t the biggest need on the roster, but New York wanted to have some backup depth and needed to improve on defense this offseason, two boxes Noel checks off.

What makes Noel a nice value for New York is his high defensive play. He’s not a traditional center, more capable of shuttling between the rim and on the perimeter to defend wings and even point guards at times. His defensive actions are sound, averaging at least one block and one steal in four of his six seasons. Last season, Noel finished with 4.8 stocks (steals + blocks) per 36 minutes, suggesting that when he’s on the floor, he’s an advantageous defender, capable of shutting opponents down.

Noel is an interesting rotation big for New York, as he can really fit with anyone outside of Mitchell Robinson on the roster. Playing alongside Julius Randle, Noel could work as more of a power forward, allowing Randle to stay at the rim and assume more of a center role. Alongside rookie Obi Toppin, Noel could be a last line of defense, standing and patrolling the rim. For 20-25 minutes a night, the combination of Robinson and Noel means New York is able to keep a solid defender on the floor at all times.

Noel could become a fan favorite for his play, but for now, a nice role as a 25-minute big man who can see an increase on nights where Robinson is in foul trouble is best.

With Randle staying on the roster, the player impacted the most is 2020 eighth overall pick Obi Toppin. With no Summer League and a brief stretch of preseason games before the start of the regular season, Toppin would be best served as a bench player, before earning more playing time in the second half of the season.

At the University of Dayton, Toppin was a monster offensively, averaging 20 points and 2.2 assists. What made him special was his ability to thrive in the pick-and-roll. Toppin’s combination of athleticism and finishing ability made him unstoppable with a full head of steam. Coming off the bench, there’s some upside in a potential combination between Toppin and Dennis Smith Jr. If Smith could regain the same bounce and ability that made him a top-10 pick four years ago, the ability to draw in defenses to leave Toppin open could be a staple in a second unit offense.

OBI WITH THE FOOTY ASSIST 🔥 pic.twitter.com/uKDTg1rfcC

Toppin could expand his offensive game as a three-point shooter. In his two-year career at Dayton, Toppin knocked down 103 three-pointers with 82 of them coming in his final season. The question for the Knicks is can he improve on that total? Can he shoot 103 as a rookie? Can he double that total? How would his efficiency (41.7% career three-point shooter at Dayton) look if he were to expand his attempts per game? All questions the Knicks will have to figure out over the course of the season.

Defensively, Toppin will be a negative early. At Dayton, he’s struggled to adjust to opponents attacking him, and he struggled in the pick-and-roll throughout his career. As a draft prospect, Toppin was never viewed as a good defensive prospect, making it an uphill climb for him to reach even neutral status as he enters the league at age 22. The good thing, however, is that between Robinson and Noel, the Knicks have solid defensive big men who could cover for his mistakes.

As the fifth big man on the roster, Omari Spellman is in a tough spot. The now 23-year-old has bounced around over the first two seasons of his career, starting in Atlanta before being traded to Golden State and then Minnesota, where he didn’t suit up for the Timberwolves. Now, Spellman is on the move again as a piece of the Ed Davis deal. Could Spellman have finally found a home in New York with the Knicks?

With a litany of big men already on the roster, Spellman faces an early uphill climb to minutes. However, he serves as an intriguing swing player who can shuffle between either post position. At power forward, Spellman can space the floor. This has been his only NBA skill shown throughout his young career, shooting 39.1% last season from beyond the arc. As a center, Spellman is undersized, but has the girth and length (7-foot-3 wingspan) to handle the position. Ultimately, he can play alongside any of the previously named post players on the roster.

The Knicks should keep him around, perhaps shuffling him between New York and Westchester (or Atlanta), just to see if he can develop into a serviceable rotation player. If it works, you have a nice big man who has the skills to be malleable to just about any big men who land on the roster. If not, he’s a waive-able player in a trade where the two second-round picks were the true win.

The New York Knicks completely rejuvenated their big man group this offseason, making a bit more sense in their options and combinations. Robinson and Noel can maintain the team’s defense as they swap in and out for each other on the floor. Randle is an offensive option similar to Toppin, giving them a scoring option in each unit. Even some of the other options, like Spellman, Knox, and Kidd-Gilchrist, offer a skill that could be combined with other players on the roster.

There’s room for improvement here, and if Spellman and Robinson can reach their potential, you could see this become a strength soon enough. For now, the Knicks have a solid big man quartet that fits each other, and that could show on the floor this upcoming season.