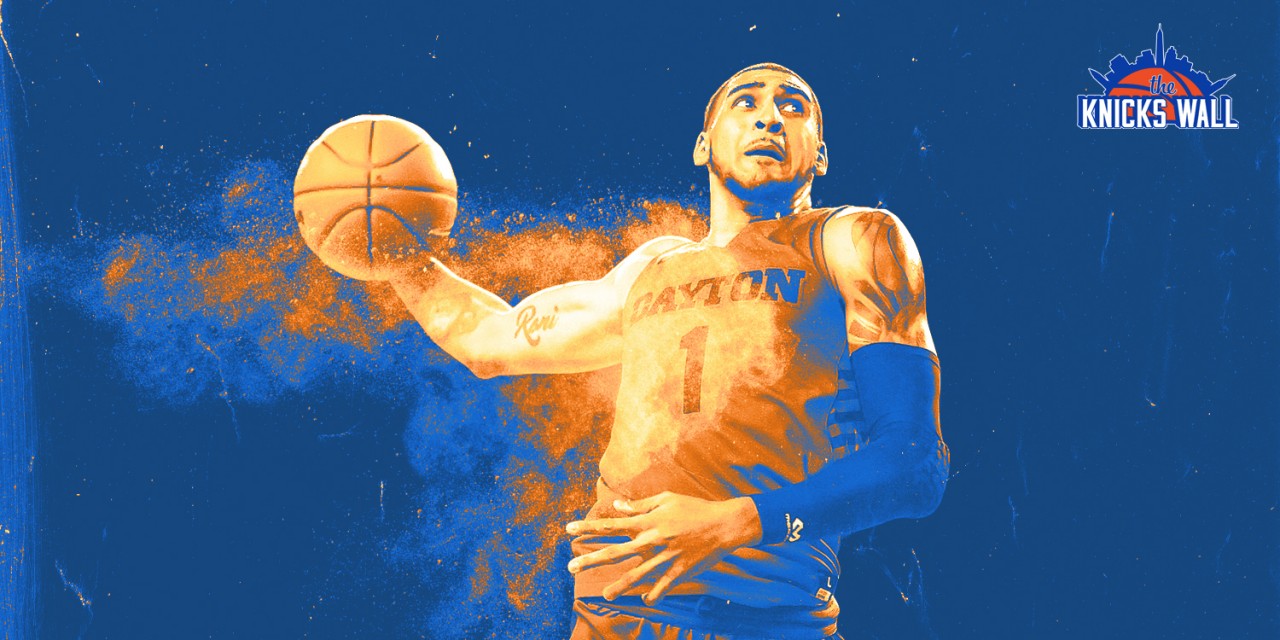 The Knicks selected a 22-year-old power forward in Obi Toppin and a 21-year-old undersized combo guard in Immanuel Quickley at the NBA Draft.

The 2020 NBA Draft is in the books. Entering the draft with two picks after an early draft-day trade with the Utah Jazz, the Knicks eventually moved back, traded a pick, and ultimately added two players to their roster.

Let’s talk about the players, their potential fit, and what lies ahead for the Knicks, as free agency is set to start this Friday.

Obi Toppin is an exceptional offensive forward, finishing with averages of 20.0 points, 7.5 rebounds, and 2.2 assists in his final season at Dayton. His ability to operate as a roll man in the pick-and-roll is sound and his ability to take one or two dribbles before finishing above the rim is Amar’e Stoudemire–like. Despite the presence of Julius Randle on the roster, Toppin is expected to come in and contribute right away.

There are shades of several players here. Stoudemire is one, but so is Tobias Harris with his size and college-level inside-outside game, but there’s also some John Collins with his raw athleticism and offensive game around the rim. Can Toppin take his game up another level as he moves from the collegiate game to the pro game?

The question marks, however, exist. At 22 years old, Toppin is expected to arrive with a more polished (offensive) game than most rookies for the Knicks, but how much better can he be? His biggest weakness is the defensive side of the ball. Part of that is his I.Q., but he also has high hips, which hurts him in pick-and-roll defense, really any defense when out in space. Yes, Mitchell Robinson could close the gap, but if Toppin can’t defend, that hurts his overall value, especially one selected in the top 10 of the NBA Draft.

I’m also slightly concerned about whether Toppin can be a consistent shooter or not. The numbers—39.0% from three, 70.2% from the free throw line—look good. However, Toppin attempted just 82 total threes as a sophomore and 141 free throws. There’s a bit more upside if Toppin can shoot, highlighted by his ability to serve as a perfect offensive option alongside Robinson, but could be a dangerous pick if he can’t, and could offer the same issues Julius Randle did alongside Robinson.

Quickley is going to fill a role right away for the Knicks. This past season, the Kentucky guard averaged 16.2 points and 1.9 assists. What’ll get him on the floor is his ability to space the floor, shooting 42.8% on 4.8 three-point attempts and 92.3% from the free throw line. On a team that struggled to space the floor, those shooting percentages are very welcomed.

The two questions for Quickley—can he defend and can he handle the point guard role?

Despite 100 career assists to 81 turnovers in his two years in Lexington, Quickley never truly ran the offense for Kentucky and will have to prove it at the next level (his teammate Tyrese Maxey, taken four picks before him, did a lot of that). Defensively, Quickley doesn’t stand out, just 1.1 stocks (steals plus blocks) per 40 minutes as a sophomore, but has a wingspan of 6-foot-8, so he could pester smaller guards.

The Knicks could use a shooter who can come through and balance the floor. Quickley offers just that. The question will be: Can he find another skill that will allow him to stay on the floor and maximize that shooting?

If the answer to that is no, it will come off as a highly suspect reach at no. 25 at the NBA Draft.

Where do we go from here?

After an up-and-down draft day, the Knicks sit with the same needs, unaddressed, as they enter free agency on Friday. Now, the Knicks have an even bigger logjam at power forward with Julius Randle and Obi Toppin now patrolling the position. The defense remains an issue, the shooting is still a question mark, and if the Knicks can’t move Randle, they might’ve drafted a backup with the eighth overall pick.

Point guard remains a need for the Knicks, ideally, someone who can assist in running the offense, while also providing floor spacing for the Knicks big men. Fred VanVleet remains the top target for New York and after this draft, the move of pushing financial chips in to acquire the Raptors guard makes even more sense. A Russell Westbrook trade also looms and after Houston’s recent movement, it certainly seems like the Rockets are going to blow up the roster.

After selecting zero wing players, the Knicks should look into both the free agent market and the trade market to satisfy their wing depth. Joe Harris would be an ideal shooter alongside R.J. Barrett, but the class dries up quickly after that. After a failed trade to the Milwaukee Bucks, New York would be wise to place an offer, or even do a sign-and-trade with Sacramento for Bogdan Bogdanović.

Another offer-sheet target—Minnesota’s Malik Beasley. The Timberwolves added Anthony Edwards with the first overall pick, added Ricky Rubio during the draft, and already have last year’s sixth overall pick, Jarrett Culver, on the roster. Amidst all of their roster turnover, throwing a hypothetical offer sheet worth four-year, $58 million wouldn’t be the worst move in New York Knicks history.

Regardless of what you think of the selections of Obi Toppin and Immanuel Quickley, the picks were made and done with. New York did their scouting and came to the determination that these were two players that had to be added to the roster. Now, it’s up to New York to help them get to where they need to be as players.

The disappointing part is that the Knicks came in with three picks in the top 40 of the draft and came away with zero needs filled. Both players should be able to play right away, but the job is not finished. With a significant amount of cap space, the Knicks will look to rebound with a strong free agency class to put a bow on the offseason before the games start on December 22nd.

»READ: Do the Knicks answer the Celtics’ call to move up in the draft?