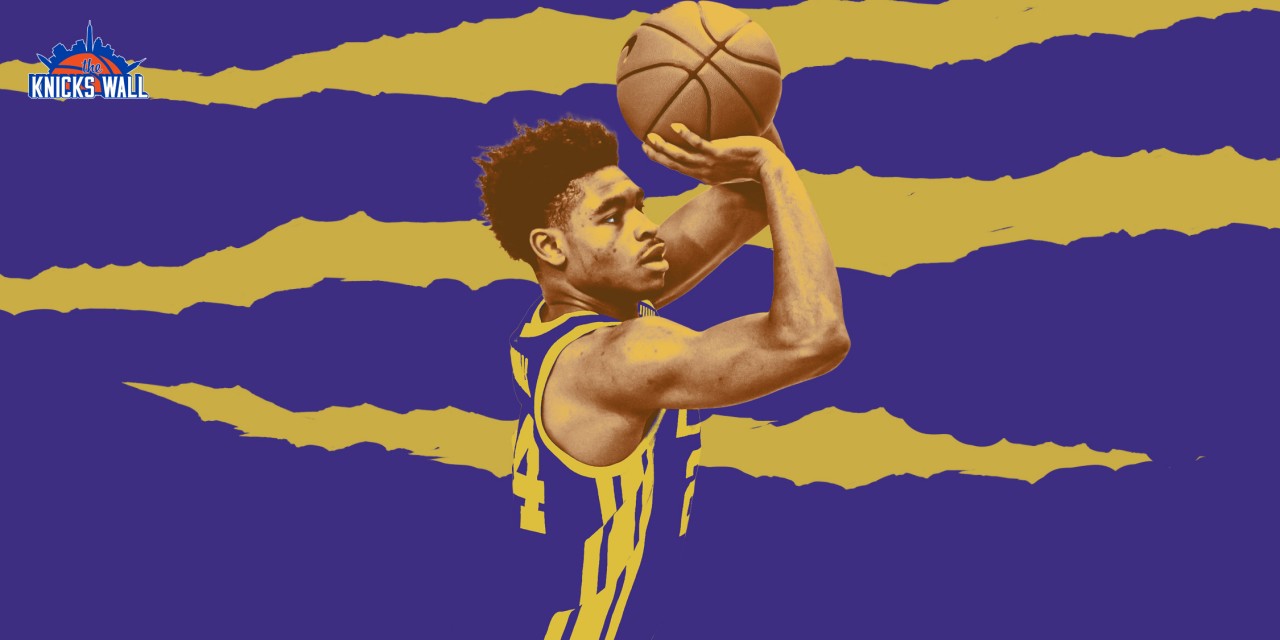 With a need for scoring off the bench and several pending free agents, LSU’s Cameron Thomas could be an answer to the Knicks’ scoring woes.


If anything has become apparent over their playoff run, it’s that the New York Knicks are still in desperate need of guards. Once Derrick Rose was inserted into the starting lineup, no one could bring that spark off the bench that the team needed.

There was no one to facilitate off the bench outside of Alec Burks, a pending free agent. So, a player of his talent could disappear from the roster. While Immanuel Quickley excelled at drawing fouls and shooting long threes, he grew cold in the playoffs and struggled beyond the arc. Outside of them, the Knicks could be left scratching their heads when it comes to another option.

A great solution to this could be LSU’s Cameron Thomas. A prolific three-point shooter and overall offensive weapon, Thomas averaged 23.0 points across 29 games, good for fourth in the NCAA, on 40.6% field-goal shooting. He is projected to fall just outside the lottery and is perhaps someone the Knicks could nab with the 19th or 21st pick this summer.

The 19-year-old freshman is an elite shooter who can make shots from anywhere on the court. Outside of his “anywhere in the gym” three-point range, he can also be incredibly aggressive driving to the rim. His full offensive repertoire was on display from game one, scoring 27 in his collegiate debut against SIU-Edwardsville.

Thomas thrives in the midrange and has the ability to get above defenders with his floater. At 6-foot-4 and 210 pounds, he has the size to bully defenders in the lane. He also excels at drawing contact, averaging over seven free throws a game. He knocked down over 88% of those throughout the year and led the nation with 194 made free throws.

While Thomas’ three-point shooting has been his most touted skill, he can be slightly inconsistent with the shot. Even though he averaged over seven three-pointers per game, he only found the bottom of the net on 32.5% of them. When Thomas is hot with it, he can go on an absolute tear from behind the arc. In the seven games played in March (including three in the SEC Tournament and two NCAA Tournament games), he shot 42.2% from the three-point range. In nine games in January, in contrast, he only shot 21.4% on those shots.

The most of any freshman in D-I 🔥🔥 pic.twitter.com/IJl6KTIbey

As explosive as Thomas can be with the ball in his hands, his biggest weakness is his defense. As defense is what head coach Tom Thibodeau hangs his hat on, this may deter the Knicks from selecting him. However, he does have the length to be effective as a perimeter defender. It’s something he would have to work into his game with time and is far from NBA-ready.

Also, Thomas can be one-dimensional as an offensive player. While he is great with the ball in his hands at shooting and driving to the basket, he struggles when unable to get his looks. He lacks vision as a passer, only averaging 1.4 assists per game at LSU. This doesn’t necessarily mean he turns the ball over much, as he committed less than two turnovers per game. It just often translates to throwing up wild shots on possessions where there may be better scoring opportunities.

Regardless of these weaknesses to his game, Thomas went on to be named to the All-SEC First Team and led the conference in points per game. This propelled the Tigers to an eighth seed in the NCAA Tournament.

Even though they lost to one-seed Michigan in the second round of the Big Dance, Thomas showed confidence playing under the bright lights. He averaged 28.5 points per game across two tournament games on 41.2% shooting. His three-pointer remained elite in those games, making five of 12 shots across both contests.

In that biggest game of the season against Michigan, Thomas used his size to shoot over defenders in the midrange. He’s able to use his large build to back down defenders and create space for himself to make those shots. He scored 30 points in that contest, his second-most of the season. Even though the Tigers lost that game to end their run, Thomas left the best impression on scouts in his final collegiate contest.

Whichever way the Knicks decide to go in the draft, their weaknesses were certainly exploited by the Hawks in their first playoff appearance in eight years. They are in high demand of shooters and facilitators with the ball in their hands, and Thomas just might be the guy to fit that billing.

He’s got great size for a guard, an efficient shooting stroke from behind the arc, and the ability to drive the ball to the basket when his shot isn’t available. Even though defense isn’t his strong suit, it’s something the Knicks could help him improve upon working within one of the league’s top defensive squads.