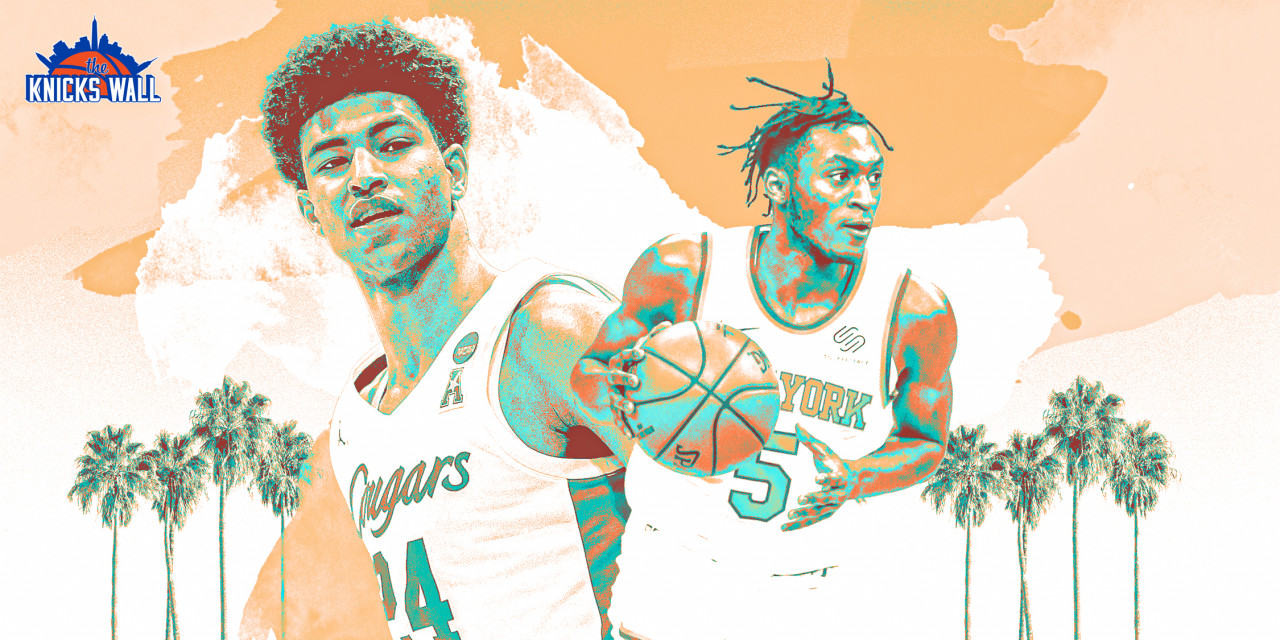 The Knicks kicked off their 2021 NBA Summer League exhibition in Las Vegas on Sunday, continuing throughout this week given a shot at the younger players.

After an opening day loss on Sunday to the Toronto Raptors at a score of 89-79, the New York Knicks have officially kicked off the 2021 NBA Summer League in Las Vegas, Nevada, and the first team play since their recent playoff run in June. The SummerKnicks’ squad features a number of young rookies and playmakers to the current team, each with something to prove here in Las Vegas.

The most notable player on this list is Kevin Knox, entering his fourth NBA season and having asked himself to partake in the Summer League this year for a chance to play more. Unfortunately, he was removed from the team last week due to health and safety protocols and will not be participating. Knox had largely fallen out of the Knicks’ rotation last season and was looking to prove himself with a successful stint here.

Outside of Knox, what do all the other players on this Summer League team have to do to impress the Knicks brass?

Quickley, selected with the 25th pick out of Kentucky in the 2020 NBA Draft, enters Summer League on the heels of an excellent rookie season. He averaged 11.4 points on just a bit over 19 minutes played per game. He was named to the All-Rookie Second Team and should be a fulcrum for this Summer League group.

While fans may have hoped to see Quickley’s minutes increase next season, things seem a bit murkier in that regard with the signings of Derrick Rose and Kemba Walker. These two ball-dominant guards figure to be used heavily in coach Tom Thibodeau’s rotation, leaving questions about where Quickley would fit.

If anything, he would be best utilized in a shooting role, something he excelled in last season. He shot 39% on nearly five three-point attempts per game and has range from just about anywhere past halfcourt. So in this limited run of Summer League games, Quickley will need to prove to the Knicks that his shot is steady, and he’s able to move well off-ball to get himself open looks. He struggled with the shot in yesterday’s game, going just 2-for-11 from three-point range. He did show off some impressive passing skills, though, leading the team with eight assists.

IMMANUEL QUICKLEY WITH THE 4 POINT PLAY TO CLOSE THE QUARTER 🔥🔥🔥🔥 pic.twitter.com/ONQMQaqxCP

Toppin, selected with the eighth pick out of Dayton in the 2020 NBA Draft, had a shaky rookie season last year. He began to figure it out toward the end of the season, though, being a +8.6 across nine games played in May. Furthermore, he saw a slight minutes bump in the playoff series against the Hawks and averaged 6.4 points on an efficient 52.2 shooting percentage.

Like Quickley, Toppin’s spot in the rotation for this upcoming season has been complicated by an offseason signing. With Mitchell Robinson expected to rejoin the lineup after missing much of last year with injuries, it was uncertain whether the Knicks would bring back center Nerlens Noel. The team did, and at a pretty penny. So, with two centers in the rotation, Toppin will likely be forced into the same position he was last year—playing behind Julius Randle to give him a rest every now and then.

In this Summer League stint, Toppin will need to show he has improved his three-point shooting—having averaged just 30.6% on the shot last season—and his ball movement abilities. When Toppin wasn’t getting lobs at the rims or spot-up three-point attempts, he often looked lost with the ball in his hands. He’ll have to show proficiency on the dribble to impress the team into possibly expanding his role. He looked great in the team’s first game, shooting 10-for-21 from the field for a team-high 24 points.

Vildoza’s situation is an interesting one, as he enters Summer League on a non-guaranteed deal. Given all the free agents the Knicks signed, Vildoza does stand the risk of being cut as a cap space casualty. For now, though, he remains a part of the team.

Vildoza played most recently on the Argentinian Olympic team, making it all the way to the quarterfinal round before losing to Australia. Prior to that, the 25-year-old guard averaged 10.9 points and 3.7 assists on 42% shooting from the floor in 27 games in Liga ACB. He also averaged 10.1 points and 3.4 assists on 41% shooting in 31 games in the EuroLeague.

Should he make the team, Vildoza faces a similarly crowded backcourt as Quickley, and the Argentine’s role would be rather undefined. He works best as a defensive stalwart and shifty passer, something the Knicks could require as Walker and Rose are more ball-dominant scoring guards. Vildoza’s work will be cut out for him in Summer League, needing to show solid on-ball defense and a knack for finding bigger players in the paint for easy buckets. This is something he could do at the NBA level with players like Robinson and Noel.

Grimes is a freshly minted Knick, selected with the team’s 25th pick out of Houston in the 2021 NBA Draft. Like the other rookies playing in Summer League, he’ll have substantially more to prove given this is his first run with the team.

Should Grimes crack the Knicks’ rotation this upcoming season, he’ll have to do it with his shooting. Grimes shot 8.3 threes per game in college last season, converting on 40.3% of them. He’ll have to keep that going in Summer League, showing the Knicks he’s able to knock these shots down at an NBA level, too. He did well in that regard yesterday, going 3-for-8 on his three-point attempts.

Jokubaitis, a 20-year-old guard from Lithuania, was selected with the 34th pick in the 2021 NBA Draft by the Knicks. He was expected to play overseas this upcoming season with just a three-game appearance in the Summer League permitted by his Barcelona club, but he told reporters on Friday that playing in the NBA this year is still an option for him. Should he perform well in Summer League, Jokubaitis may decide to transfer over to the NBA sooner than expected. However, a DNP in yesterday’s game isn’t a good sign of things to come for the Lithuanian.

Jokubaitis fits more toward the mold of a traditional point guard but also moves well without the ball in his hands. He’s got great size for a point guard at 6’4”, and is adept at defending either backcourt spot. Since he might be playing overseas at first, it’d be best for him to show off his combo guard skills in this Summer League stretch. That way, when he does come over to the U.S., they would feel comfortable slotting him into either backcourt position per their team needs.

Jokubaitis shows insanely fascinating footwork and coordination. Brandon Davies is not excellent closeout defender but he knows how to close the angle. But, Jokubaitis gives pump and body fake (look his left knee) and attacks to the basket quickly. Impressive. pic.twitter.com/pKR2Npqj18

McBride was taken with the 36th pick out of West Virginia in the 2021 NBA Draft. Like Jokubaitis, McBride is a bit more of a traditional point guard, having averaged 4.8 assists per game in college last year. However, McBride will be here to help the team now, and his passing knack could be something they immediately cherish in him.

In these Summer League games, McBride will have to showcase his offensive playmaking skills, showing good decision-making with the ball in his hands and a solid shooting stroke. He shot over 40% on three-pointers at West Virginia last year, too. His defense should also prove to be a strong suit, nabbing 1.9 steals per game in college last year. So, McBride has an impressive two-way game he will need to put on display.

Deuce McBride saw me criticize his playmaking. Love the pace here. Burst at the perfect time to draw help, nice dump off pic.twitter.com/Oe8BNCDx7Y

Sims was the Knicks’ last draft pick, taken with the 58th selection out of Texas this year. As a forward, it’s tough to see how Sims would factor into the current Knicks roster at all. At the forward/center positions, he would have Julius Randle, Robinson, Noel, and Toppin all blocking his way. So, Sims may be more of an organizational two-way contract stash to play in the G League this coming season.

Anyway, in Summer League play, Sims can show off his incredible athleticism. He’s got a large frame and at 6’10”, is capable of altering shots with just his size alone. He averaged 7.2 rebounds and over one block per game last year at Texas. If he is able to maintain this type of paint presence in the Summer League, he could have a future with the team. He impressed greatly in yesterday’s game, going a perfect 6-for-6 from the field for 12 points to go along with eight rebounds and a block.

Two notable rookies playing on this Summer League team not drafted by the Knicks are Aamir Simms and MJ Walker. Simms is a four-year forward from Clemson who averaged 13.4 points and 6.4 rebounds in his senior season. Walker is a four-year guard from Florida State who averaged 12.2 points and shot 42.3% on three-pointers last season. These two could be potential G League stashes with successful Summer League performances.

The Knicks’ next Summer League game is today at 2 p.m. EST against the Indiana Pacers, with at least three more games remaining after that.