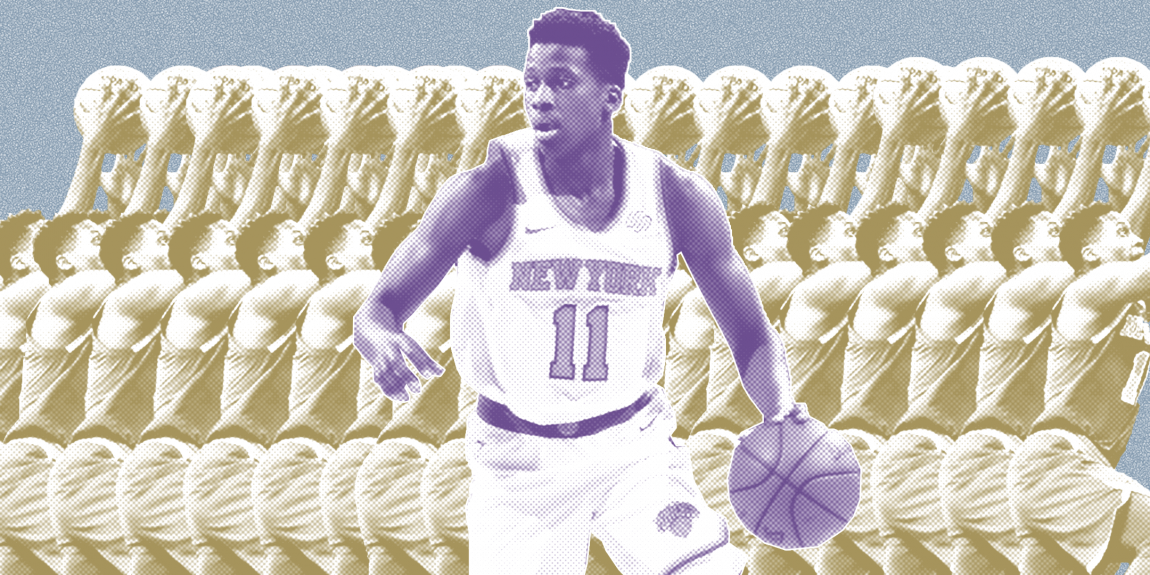 Frank Ntilikina’s inconsistent rookie campaign has had plenty of noteworthy moments. What has he done this season, and what can he do to make the next year one to remember?

When the Knicks selected Frank Ntilikina with the 8th overall pick, there wasn’t much expectation that he would make a significant impact in his rookie season. Entering the draft, the 19-year-old prospect out of France was renowned for his defensive prowess, but widely regarded as a project that would take extra time to develop.

Now, with his rookie season winding down, Frank has had a year full of ups and downs. While he’s shown flashes of potential, especially on the defensive end, there still remains plenty of work for him to put in on other areas of his game.

With New York’s season coming to a close, let’s take a look at how Ntilikina’s rookie year went, and what he needs to work on in the offseason.

The Skills to Build On

One particular aspect of Frank’s game that needs some work over the summer is his driving ability. He averages only 4.4 drives per game, on which he shoots 35 percent (via NBA.com). Whether in transition or in a halfcourt set, Ntilikina tends to show a lack of aggressiveness when taking the ball to the hoop, usually either settling for a jumper or dishing to a teammate. When he does take it up, too frequently a tentative layup that results in an easy stop for the defense occurs.

Where this passiveness often rears its head is in the pick and roll. Frank typically goes for a pull-up jumper or a pass, making his handling of the ball off the screen not as effective as it could be if he was less reluctant when attacking the rim. However, Ntilikina’s pick and roll game has overall been pretty decent. His combination of length and basketball I.Q. allow him to slide by defenders and find the screen man at the right moment or get himself an open look. Frank principally thrives as a pick and roll ball handler when Porzingis serves as the screener. Ntilikina’s skill handling the ball off the pick and his passing ability combined with KP’s size and effectiveness as a roller made the two a great duo.

If Frank can get more aggressive and improve his shot off the pick (he’s shooting 38.1 percent from the field as a screen and roll ball handler, per NBA.com), he can become a great pick and roll guard, especially with Kristaps Porzingis on the floor with him.

Where Ntilikina has excelled most in his rookie season has by far been on the defensive end. The feature that has most allowed him to be such a capable defender with so little NBA experience is his length. A  7-foot wingspan causes problems for any guard, but when that wingspan comes with the I.Q. and quick hands of Ntilikina, he puts his opposition at a severe disadvantage.

Frank has already been able to clamp some of the league’s best guards. With the body and defensive mind he has as a 19-year-old, it’s only a matter of time until he’s wreaking havoc among ball handlers all around the NBA. Just look at this:

Perhaps his best defensive showing was in an early season game against the Pacers in which tough defense, a few steals, and some impressive offense from Frank helped bring the Knicks back from a deep deficit.

Another area of his game that he should look to develop in the offseason is his shooting. Ntilikina just hasn’t been able to get the jump shot to fall consistently, and the numbers reflect it. He is currently shooting 36 percent from the field and 31 percent from beyond the arc, attempting around two treys per game.

Although the stats show a pretty ugly rookie season in shooting the ball, Frank has a pretty nice jumpshot, and his struggles can likely be chalked up to a lack of confidence. Once he gains experience and gets more shots up, I think he’ll be able to get a steady jumper down.

Aside from working on his game over the summer, the Knicks’ coaching staff will have to work out which position Frank will get the majority of his minutes at in the future. With the acquisition of Emmanuel Mudiay and the explosion of Trey Burke, Frank’s long-term status at the point guard position has been called into question.

While he’s shown potential both off and on the ball, Ntilikina should get the majority of minutes as a ball handler as to take advantage of his passing and skill in the pick and roll. Mudiay, although he hasn’t had much time with the Knicks, has yet to show more promise than Frank as the organization’s future point guard. As far as Burke is concerned, I think the best option would be for him to share the role as primary ball-handler with Frank, switching on and off the ball.

Ntilikina has shown some exciting flashes in his rookie season on defense and in certain areas on offense, and if he works on the facets of his game that need improvement over the offseason, he can be a promising player for the Knickerbockers to hold on to.