A Tale of Two Teams: The Clear Issue Limiting the Knicks 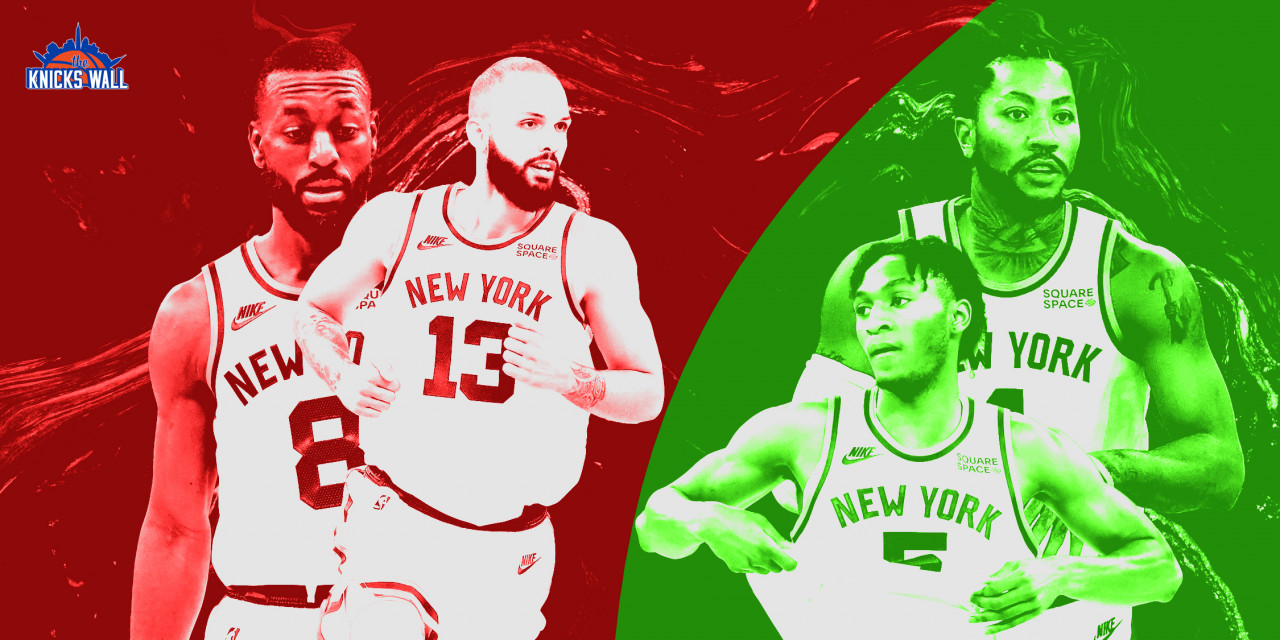 The vast difference in play between the starters and bench unit is not sustainable, as something needs to change for the Knicks.

Not everything is an overreaction. The New York Knicks are not a bad basketball team by any stretch of the imagination. By that same token, they are also far from a very good basketball team at this moment.

The good news is the issues plaguing the team are clear. The offense is not nearly as good as opening night suggested it would be. The deeper issue at play here is the vast difference in identities between the starting lineup and the second unit. The second unit carries the heart of last year’s team, while the starters play like five guys not totally on the same page.

The starters are not good on offense and are really not good on defense, particularly beyond the arc where opponents are playing “Around the World” from deep.

The dip in defense was expected when Kemba Walker was brought into the fold, and Evan Fournier to a lesser extent. When both are hitting their shots, life is good. But when they are not, it gets ugly, and lately, things have been hideous for the newest Knicks.

Over the past 10 games, Walker and Fournier have been objectively bad on offense. Both are averaging around 11 points per game and shooting 40.0% from the field. Each has done something more to make this cold spell feel worse. For Fournier, it’s his three-point percentage; shooting 32.8% on 6.1 attempts per game is not good for anyone, let alone one of the guys the team is counting on to score double of his current production.

For Walker, it’s much more concerning when his shot isn’t falling. Walker is shooting about 60% of his attempts from beyond the arc these past 10 games. The appeal with Walker joining the fray was that he was going to bring a three-level scoring threat to the mix. If he is not filling that void and not giving you anything on defense, you have yourself a big problem.

Tom Thibodeau has not alleviated any struggles. His new arrivals are having. Had the starting lineup not been literally booed off the court on Wednesday night against the Milwaukee Bucks, the starters probably come back in during the fourth quarter.

In those 205 minutes, they are sporting a -14.4 Net Rating. Out of the five-man lineups that have logged at least 100 minutes together, the Knicks have the second-worst NetRtg, trailing the rebuilding Houston Rockets. In that same grouping, the Knick starters also play at the slowest pace (96.55), second-worst rebound percentage (49.0), and the worst Defensive Rating (119.3).

In summary, the trade-off the team knowingly took in the offseason—swapping out defensive-minded players for playmaking scorers—has not yielded the intended results. This would not be as big a problem if this were a super-team scenario where you bide your time until three top-20 guys figure out how to gel. There is not a sense of security that Walker can turn it around or Fournier will consistently be a 40.0% shooter from deep.

As Thibodeau said during the postgame, a small sample size is not a good excuse for the struggles.

Thibodeau is not innocent either. His decision to ride the starters out has compounded the problem, placing the Knicks in large deficits that the bench can’t always clear out. Wednesday was the latest example, with the bench mob wiping out a large deficit, only it was too late.

Thibodeau has attempted to mix it up minimally, relying on certain guys like Derrick Rose and Alec Burks to play with Randle, Barrett, and Robinson. But it hasn’t been enough. To truly address the identity crisis, Thibodeau must rely on the team’s one true strength: its depth. And the first step towards that is evening out the minutes his second unit plays compared to the starters.

The bench mob carries the energy of last year’s team that made it so special.

OBI TOPPIN GETS THE GARDEN ROCKIN AND THEY’RE CHANTING “OBI” AT MSG pic.twitter.com/6XAI8GRSRU

Unlike the starters, Thibodeau’s second-most used lineup of Rose, Burks, Immanuel Quickley, Obi Toppin, and Taj Gibson has been molly-whopping opponents. The bench mob has a 113.5 Offensive Rating and 93.5 Defensive Rating. And the reason behind their success is not that deep.

If you look in the margins, they do not out-shoot, out-rebound, out-dime the starters all that much. The chemistry is just that much stronger. The close-outs are much cleaner and the offense feels smoother. You can feel five guys moving as one.

Even though their comeback efforts came up short, the Knicks bench unit showed why they are one of the best in the league. They defend at a high level and their versatility offensively makes them difficult to guard

Make sure to turn your sound on! pic.twitter.com/vZTZF2KBYz

That is the level of cohesion the full team felt last season. This year’s group is still finding its way. In order to re-create the magic of last season, it will take some rejiggering by the coaching staff to first filter in more lineups from the core of last year’s team.

Once Nerlens Noel’s health is shored up, Thibodeau could dip back into lineup combinations that worked so well last year while mixing in some of his neophytes. Perhaps more Barrett, Quickley, Randle, Toppin, and Rose lineups. Maybe Quentin Grimes gets some more run, as the rookie already looks like he could fill Reggie Bullock’s role last season even better than Bullock did.

It is not an overreaction to say something needs to change. It is O.K. to want more. As a full squad, the Knicks have a good group of players. The problem is how those players are being deployed.

Thibodeau is a very smart basketball mind who has options, which is the important thing he has not totally embraced 12 games into the season. The strength of the Knicks is their numbers, and until the minute distribution reflects that strength the team will not realize its full potential.

»READ: The Cavs exploited the one thing the Knicks aren’t prepared to stop