Should the NBA Intervene Into James Dolan’s Knicks Ownership? 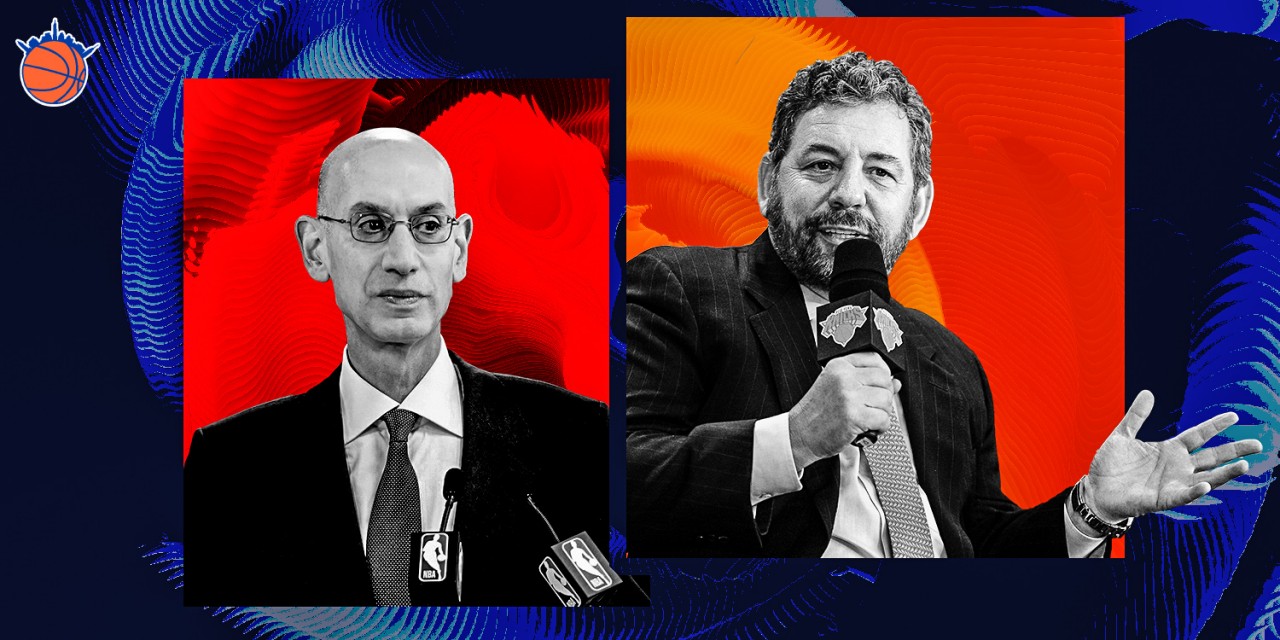 Adam Silver has spearheaded an NBA team owner’s removal in the past, but there are multiple obstacles in the way for James Dolan and the Knicks.

The NBA season is not a month old and the Knicks’ organizational dysfunction has already had its moment in the spotlight. The latest source of ridicule arose on November 10th, when James Dolan ordered Steve Mills and Scott Perry to publicly undermine David Fizdale after a home loss to Cleveland. The executives called out the team’s inconsistency after 10 games with an imbalanced and brand-new roster that they themselves constructed after better players passed on working for Dolan. ESPN’s Adrian Wojnarowski followed that up with reports of Fizdale’s impending demise, and Stephen A. Smith’s decibels levels reached new heights.

It was just the latest embarrassing moment in Dolan’s embarrassing tenure, and another reminder of his stain on the league whilst running the franchise in its biggest market.

As shrewd a power broker as I assume NBA Commissioner Adam Silver is, I know you can’t remove an owner for being bad. I get it; it’s precedent, it’s politics, it’s complicated.

So, for the sake of…therapy, just hypothetically: What if Silver actually did try to remove James Dolan? Is there actual justification, and how would he go about it?

First, some history. As you’d probably expect, the removal of a pro sports owner is extremely rare in North America. It’s happened a handful times for uniquely extenuating circumstances. A rundown:

Of course, those were non-NBA cases. The NBA did take over the Hornets from George Shinn in 2010 for economic reasons, but in terms of what could hypothetically occur now, the Donald Sterling ordeal is the most relevant case study.

After more thanks 30 years overseeing a Clippers franchise that became synonymous with ineptitude, V. Stiviano’s recordings of Sterling saying alarmingly racist things provided an impossible-to-overlook impetus to belatedly boot the reviled owner. TMZ released the tapes on a Friday, and by that Monday, Silver had banned Sterling for life.

As much praise as Silver deserves for acting swiftly and decisively, it was impossible to deny the sentiments on the tape. Even overlooking Sterling’s long history of heinous conduct, there was no conceivable way for the NBA to proceed with him involved. As Matt Barnes told Ramona Shelburne, “I think the organization knew, and I’m sure the NBA knew, like we have a bad apple. And he finally f—ed up. And we have proof now.”

But that’s kind of the point and the problem. In theory, if someone—especially an owner—has an objectively despicable track record, it shouldn’t really take that smoky of a gun to get rid of them (I will be resisting politics parallels).

Truth is, the NBA should have seriously tried to get rid of Sterling years before. And they kind of did at the very beginning! In 1982, one year after he took over, the league considered booting him for a host of reasons, to no avail.

More troubling incidents followed. He settled multiple sexual harassment lawsuits that the NBA likely knew about. He was a notorious slumlord. He treated employees terribly in different ways—from Elgin Baylor to Baron Davis to Blake Griffin. In that same Shelburne piece, NBPA lawyer Larry Fleisher said the Clippers “missed payments to active players, failed to meet obligations on deferred payments, did not live up to the collective bargaining agreement that called for first-class air travel and refused to abide by arbitration decisions, necessitating court actions.”

It feels beside the point, but Sterling also had zero interest in improving the basketball team. The Clippers lost over 50 or more games 22 times in his 33 years sitting courtside.

He was a glaring blemish on the league for decades, but—in part because he didn’t technically lose any of his legal battles—the NBA didn’t intervene until the tape, at which point Silver quickly began the process of terminating his ownership. The league cited Article 13D of the NBA Constitution, which states an owner may be terminated with three-fourths votes from the Board of Governors if that person shall “fail or refuse to fulfill its contractual obligations…in such a way as to affect the Association or its Members adversely.” In the case of Sterling, that was easy to argue, because the Clippers immediately saw sponsors pull out, and there was no way anybody was going to support or work for the Clippers organization with him in charge.

Dolan’s Damage to the Knicks and the NBA

And that brings us back to Jimmy D.

Dolan has owned the Knicks since 1997. Since he took over, the Knicks’ winning percentage is the worst of any team. They’ve had 13 head coaches.

But as with Sterling, it’s not just about basketball. He has also put together his own run of utterly awful behavior—too much to fully get into here. But for a quick refresher: He hired Isiah Thomas to run the Liberty after his horrendous stint running the Knicks, which included accusations of sexual harassment by female employees that very much involved Dolan. He nearly brawled courtside with a beloved former Knick and has sparred with fans on multiple occasions, sometimes via cruel emails. HE BANNED ETHAN HAWKE.

Dolan was fined $50,000 for pettily barring the New York Daily News from a post-draft press conference, which, as Michael McCann of Sports Illustrated pointed out, was meant to be an easy opportunity to produce positive PR. He’s had other childish media beefs. He tried to force the Rockettes to dance against their will. He callously interfered with Inglewood, California, civic development and politics. The list goes on.

Yes, he’ll write checks. But his misplaced spending has contributed to more head-scratches than playoff victories. Even the most positive Knicks moment of the Dolan’s entire reign ended in ugly fashion, as Dolan was in his feelings after Jeremy Lin entertained a lucrative contract with a better team.

Besides the way he’s generally treated people, the most consequential damage he’s inflicted is on the reputation of his own franchise. David Stern once said the Knicks are “not a model of intelligent management.” Kevin Durant recently told Hot 97: “It’s hard to get the best players to play [for the Knicks]…The cool thing right now is not the Knicks.” It’s not good when star players feel that way about one of the sport’s marquee franchises.

But, dishearteningly, with each rumor that he may sell, he seems to dig in deeper—even after admitting to putting out feelers. Silver said he has “no reason to believe he is going to sell the Knicks because it’s a public company and he said he’s not selling the Knicks.”

How to Remove Him

So if we take Dolan at his word (which will hopefully turn out to be a mistake), Silver would have to whip up the votes to force a sale. Complicated finances aside for a second, would it at least be justified in the Constitution?

Again, there’s no clause that says anything about “expressing flagrantly discriminatory sentiments” as means of termination. The NBA simply determined that Sterling “affect[ed] the Association or its Members adversely.”

Recordings or not, if there’s an argument that James Dolan doesn’t affect the league adversely, feel free to make it in my mentions. The only case I see for him is the financial one, as the Knicks, the league, and MSG continue to financially flourish. But if fans are still giving James Dolan money to attend games, they’ll do it for another owner. (It’s like giving Roger Goodell credit for the NFL’s annual revenue—pretty sure that’s going to happen no matter who’s in charge). Beyond that, his pattern of failure and behavior is objectively a net negative for the league. I don’t have an MBA, but it’s not better for the league than having a Knicks team with big stars and home playoff games. From folks who probably have an MBA in Bloomberg:

“There’s still additional value to be unlocked…For instance, they could get better players. Or win games. Either of those things would likely increase attendance from last year’s 98% capacity to 100% and would lead to highly profitable playoff rounds….And MSG is thriving. Renovations to the Garden have created more revenue streams, and Dolan has greatly expanded MSG’s entertainment portfolio.”

That article also mentions that MSG shares “are up more than 50% over the past three years…including ‘a discount for the Dolan perception,’ for the Knicks’ poor performance and bad publicity.”

Here’s the most wishful thinking part of this entire daydream: maybe he could be convinced? This isn’t my place to say—nor is it typical of stubborn egomaniac billionaires—but he should sell. He apparently doesn’t have “any appetite for running the team” and is obviously much happier playing his music and in other business ventures, like futuristic, dome-shaped arenas. And if he’s such a diehard fan, he can still root for the Knicks! He can come to games and behave like a normal human being, and maybe he will be even be (*gulp*) cheered for relinquishing the throne.

In the Sterling case, it also helped that Silver had an eager mega billionaire, Steve Ballmer, waiting in the wings ready to giddily overpay for an NBA franchise. Ballmer’s immediate $2 billion offer convinced Shelly Sterling to sell and Donald to drop his lawsuit against the league. Zach Lowe broke down the obstacles in rounding up the finances for a move as large as the sale of the Knicks—and the finances behind Dolan’s ownership are tricky. But I assume it would not be impossible for Silver and fellow smart people to pull that off—if 75% of the Board of Governors voted him in violation of the bylaws.

I understand that it would be extremely tough to make the legal case, based on a history of incidents as opposed to a single unacceptable event, especially considering the Knicks’ revenue.

And I get that the other owners would never agree to it—they don’t want to put themselves at risk should they slip up. Mark Cuban didn’t even support booting Sterling, citing a “slippery slope.” (Personally, I think that’s BS. In a case like Dolan’s, there’s a series of public incidents far more extensive than any other owner. Would removing him actually automatically place every other NBA owner at risk? And if you do something so egregious—whether once or over time—to put yourself in that spot, maybe it’s O.K. if they are voted out?)

I’m sure Adam would love to snap his fingers and disappear Dolan. I just hope he’s at least exploring it behind closed doors. That he’s taken meetings with fellow owners, lawyers, prospective buyers, whomever, and the idea of removing Dolan has been a topic of conversation. Smoking gun or not, it’s better for the league to have someone more competent running the Knicks.

The Clippers were synonymous with losing—now they’re cutting-edge, respected, competitive, with a flashy new stadium in the works and superstars orchestrating to play there.

Dolan is far from the first or last detestable sports owner (see: NFL). Other NBA owners are bad, too (see: Robert Sarver). But for a league that (China stuff aside) aims to be as progressive, inclusive, and fan-friendly as any major sports association, Dolan is particularly antithetical to everything Silver wants his NBA to represent.

I know it won’t happen. I’m just fantasizing. But Adam Silver should intervene. Treat Dolan like he treats fans.

Thank you for indulging me in this therapeutic exercise. I don’t feel better.