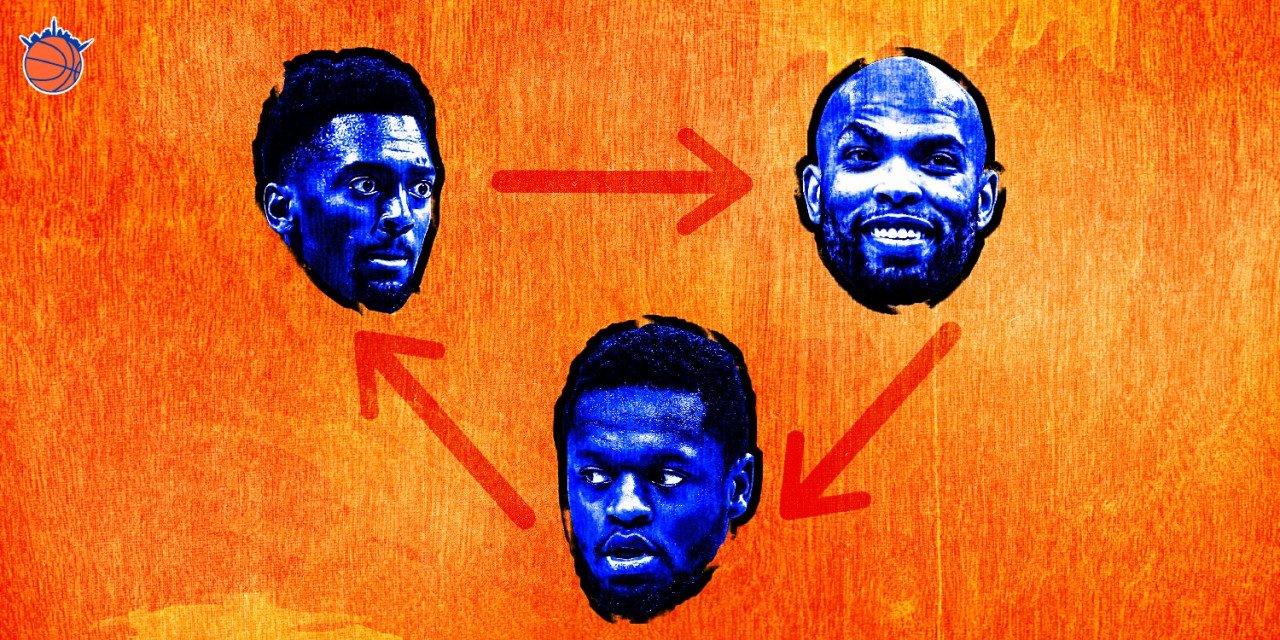 One of the first observations from the free agency haul by the Knicks was the infusion of power forwards. How will David Fizdale handle minutes allocations to veterans and young bigs alike?

I don’t want to be the bearer of bad news, but in case you didn’t know, the Knicks did not get Kevin Durant or Kyrie Irving this summer.

They didn’t get Kawhi Leonard; they didn’t even get Jimmy Butler. In fact, it seems like even before the Durant-Irving news was official, they had already started pivoting to Plan B.

And what did that entail? For the most part, loading up on youngish players on short-term deals to provide a semblance of competence to a roster that, let’s just say, came up woefully short in that regard last season.

In a way, this summer’s plan was a continuation of last summer’s reclamation tour, just on a much bigger scale. Instead of going after young guys on the fringes of NBA rotations and trying to turn them into okay bench players, they signed productive young guys like Julius Randle and Bobby Portis to short-term, above-market-value deals in the hopes of turning them into winning players. They also signed respected veterans like Wayne Ellington and Taj Gibson, who will provide locker room leadership while not being total minuses on the floor. Those are solid steps in the right direction.

But of course, with the Knicks, nothing is ever quite that simple. The signings raise nearly as many questions as they answer. The main question now is, how David Fizdale will allocate minutes on a roster with 13-14 players deserving of, and wanting, minutes?

As many on Twitter and in the media have suggested, the big man rotation will be particularly interesting, especially if the rumored signing of Marcus Morris goes through.

Morris can play minutes at the 3, but he’s at his best at the 4 at this point in his career, and his inclusion brings the total number of power forwards signed by the Knicks this summer to four: Randle, Portis, Gibson, and Morris—and that’s before we get to Kevin Knox and second-round pick Ignas Brazdeikis, both of whom seem destined to be at their best playing the small-ball 4.

And that’s not their only point of similarity. With the exception of Taj Gibson, all of these players are tunnel-vision scorers with gigantic question marks surrounding their defense and willingness/ability to facilitate for others.

So how should Coach Fiz structure the 96 available frontcourt minutes per night to get the most out of this talented, volatile collection of big men?

Let’s begin with the most obvious answer: the starting lineup, barring a dramatic twist during training camp, will be Julius Randle and Mitchell Robinson—the latter of whom is the one true center on the roster.

Randle played 30 minutes per game for the first time in his career last season, and from we know about Fizdale as a coach—not to mention the Knicks’ desperate need for scoring—it seems likely he’ll be right around that ballpark again this season.

Mitchell Robinson is a slightly more interesting story, however. In his 19 games as a starter last season, he averaged 25 minutes per contest. Despite potentially being the second-best player on this year’s roster, I don’t expect that number to get much higher this season. If Summer League has shown us anything about Mr. Lobinson, it’s that his foul and defensive discipline issues haven’t exactly disappeared. With established guys like Gibson behind him, I’m not sure Robinson will have quite as long a rope to make schematic mistakes this year. Let’s pencil him in for 27 minutes a night.

That leaves us with around 39 minutes for Gibson, Portis, Iggy, some Knox, and Marcus Morris, assuming he backs out of his agreement with the Spurs to join the Knicks (a sentence I never thought I’d write).

Portis is the best bet to the first big off the bench. At 6’11”, and having spent his entire career splitting time between the power forward and center positions, Portis will be an interesting toy for Fizdale to play with, as he basically fits (offensively) alongside all of the other bigs on the roster.

If Fiz wants a supercharged offensive lineup, he can run Portis and Randle together. For a more balanced look, he can play Portis and Gibson, which would likely shift Portis more to the power forward so Gibson can defend the rim. For a small-ball shooting lineup, Portis could be paired with any of Morris, Knox, or Brazdeikis—hopefully with Frank Ntilikina and Damyean Dotson, so there’s at least a little perimeter defense. Portis’ versatility and scoring acumen (he shot over 39% from three last season, which would be the fourth-best mark on last year’s team) make him a lock to be the primary big-minutes big off the bench, likely somewhere between 22-25 minutes per night.

Now we get to an important question: did Taj Gibson and Marcus Morris really spurn going to winning situations to join the worst team in the league and fight to split 15-ish minutes a night off the bench? And did the Knicks really shell out $25 million dollars next year for that two-player fight?

Well, no. More likely, they brought those players in because both could very well have value to a playoff team at the deadline, with Taj having one million dollars guaranteed in 2020 and Mook on an expiring deal. But as long as they’re on this roster, the questions will persist.

There’s one name we have yet to assign minutes to, and it’s the latest Summer League darling, Brazdeikis. With the glut of players at basically every position on the roster, it’s hard to see a clear path for Iggy to get minutes this season. Along with the power forward log jam, the Knicks have Damyean Dotson, Allonzo Trier, R.J. Barrett, Wayne Ellington, Reggie Bullock (assuming his signing goes through), and given Fizdale’s preference for dual point guard lineups, possibly Frank Ntilikina and/or Kadeem Allen fighting for minutes at the 2. Some of them will undoubtedly be shifted to the 3 to accommodate everyone—which, sadly, means Iggy’s best chance at minutes this summer will likely be in Westchester.

In my opinion, the ideal Knicks roster breakdown would look something like this:

While there are real questions about Barrett and Knox playing up a position here, this seems like the best bet to balance developing the kids with keeping the team competitive. There will likely be plenty of nights where the bench outperforms the starters in this scenario, but that’s not such a bad thing.

While many of these questions won’t be answered until training camp begins, there’s one thing that’s clear from looking at this strange, volatile, oddly enticing group: Fizdale is going to have his work cut out for him this season.