After Game 3, RJ Barrett Is the Key to Getting Back on Track 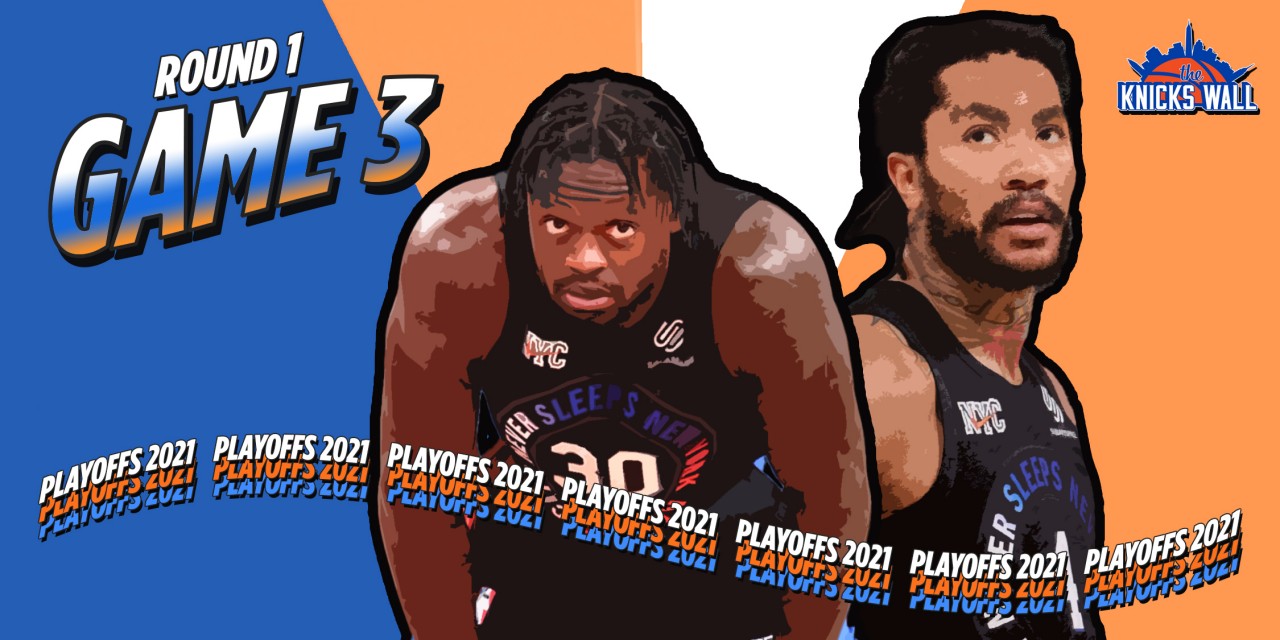 After a 105-94 loss in Atlanta for Game 3, the New York Knicks will have to find some answers to tie the series. One option? RJ Barrett.

After Friday’s 105-94 loss at the hands of the Atlanta Hawks in Game 3, the New York Knicks are now on their backfoot.

Down 2-1 in the series with another road game in Atlanta, the prospect of a “Gentleman’s Sweep” looms for the Knicks. This loss was a bit more important because Tom Thibodeau threw his changeup. Swapping out Elfrid Payton for Derrick Rose in the starting lineup was the move every Knick fan clamored for, giving New York’s offense a jolt from the opening tip, rather than attempt to hold for the few minutes Payton would play.

It worked. Rose started out hot, the offense worked better than it usually did the previous two games—and yet the Knicks walked out of State Farm Arena down 2-1 and Trae Young walking off the court stating: “This is the A! We here!”

There seem to be conversations within the conversations here. Julius Randle is struggling. The All-Star, the Most Improved Player of the Year, and the proverbial “straw that stirs the drink” appears out of his depths at the moment. The game that slowed down for him during the regular season has seemed to speed up and outside of that second half of Game 2 where he scored 13 points and played a key role in tying the series, the former Kentucky Wildcat is struggling to catch up.

That leads to other questions, like “Can Julius Randle right the ship?” or “What does this say about New York’s talent moving forward?” some of which we’ll discuss at a later date. I don’t want to talk about Randle because, well, we’ll get there. Right now, I want to talk about our second-year player R.J. Barrett. The Knicks need him to figure it out.

In his first taste of playoff basketball, the former Duke product is having a rough go. Barrett is averaging 11.3 points, 7.7 rebounds, and 2.0 assists. The shooting is woeful—34.2% from the field, 25.0% from the outside. As the Randle-led offense has hit a snag, the starting perimeter players alongside him, Barrett and Reggie Bullock, have struggled to offer much of anything. It’s been a rough series for Barrett, to say the least, but is there anything for him to find here?

Is R.J. Barrett getting good shots?

The juxtaposition between Randle and Barrett has been interesting to watch within the first three games of the series. Both are struggling; however, Randle seems to be overthinking. During the season, Randle was much more cerebral, working without much thinking. Since Game 1, there’s been a hesitation—to say the least—in his game. As a result, Randle is throwing jump passes and passing up on good shots for more difficult shots.

Meanwhile, Barrett seems like Barrett when he gets the ball. Normally stoic, Barrett is a bit more advantageous when getting the ball, whether beyond the arc or attempting to attack the basket. Looking at the first three games, Barrett was active in getting into the lane. He hits a nice three-ball in Game 2, but that’s just about it. That leads credence to Barrett just being off. Even Game 3 starts off well for Barrett, with two wide-open looks from the outside. Neither shot falls.

There, Rose gets right into the paint, kicks it to Randle into the corner, who swiftly pushes it off to an open Barrett. That’s a wide-open three with the defense off-balance. It needs to fall but it doesn’t. The second three comes from Randle cutting through and finding Barrett in the corner. Trae Young does come to throw pressure at the end, but Barrett had more than enough time to get the shot off without any issues. Simply put: those are shots Barrett needs to make.

Between that and his attacking of the basket, something he showed off in Game 1 with a thunderous dunk in the third quarter, Barrett is getting ideal shots. Thanks to getting his normal shooting profile, Barrett gets many open looks from the outside, but those first two shots were emphasized for just how open he was with Rose in the starting lineup. Those shots from Game 3 should be available in Game 4.

However, finishing at the rim needs to be improved. Normally, this makes sense, thanks to Clint Capela roaming in the backline, waiting to send back any shot attempt he sees coming his way. However, Barrett has been poor even when Capela takes a seat. Whether in the halfcourt or transition, Barrett has struggled in shots at the rim and in the paint (floaters, fadeaways, pull-ups, the works), which has hurt his game so far in the playoffs.

Barrett as the lone starter

One of my few concerns I had during the regular season was the constant combination of Barrett-Randle lineups. I wrote about it in January. Not because it was poor—it served as the crutch of the regular season—but because it didn’t allow Barrett to get full reps as the best player on the floor. Even if those minutes would’ve resulted in negative play, it would’ve been positive in the long run.

Now, the concerns have returned a bit as both players suffer massive shooting slumps. Again, as Randle’s offense sputters, it takes away Bullock, a 3-and-D perimeter player who has used Randle’s gravity to a T this season, and Barrett, who, despite wanting him to be much more, has largely assumed the role of a catch-and-shoot option with occasional drives, rim runs, and mid-range jumpers thrown in.

In removing Payton out of the rotation and placing Rose in the starting spot, the bench just lacked some oomph. It makes sense; Rose, Alec Burks, and Immanuel Quickley played out of their minds in Game 1, while Rose was the leading scorer in Game 2. Moving Rose into the starting lineup took a key cog out of their bench and when you add Burks’ spotty play and Quickley being a rookie, it all comes together.

One particular lineup was one near the start of the second quarter: Quickley, Bullock, Burks, Obi Toppin, and Nerlens Noel. The lineup played for about four minutes and finished with a -2, via PopcornMachine.net, a site that breaks down the game flow. This lineup stood out for three reasons. The first is Barrett sitting from the 2:52 mark of the first quarter until the 5:43 mark of the second quarter. The second is that it starts a string of 24 straight game minutes from Bullock, which is insane to me.

The third is the lineup. That lineup leans heavily on Burks’ creation to the point where stopping Burks stifles that offense. Quickley serves better as a secondary ball-handler, who becomes more dangerous as he gets it going from beyond the arc. Who is throwing lobs to Toppin and taking advantage of his above-the-rim offense? Where’s the gravity to get Bullock going and working off-screens? To give Thibs the benefit of the doubt, this is the first game with Rose elevated, but that lineup stood out.

What about swapping Barrett in that lineup for Bullock?

The trio of Quickley, Toppin, and Barrett isn’t tried and tested, as the trio played just 98 minutes together in the regular season. But it makes sense with their skill sets, as evidenced by a 112.5 Offensive Rating, 94.3 Defensive Rating, and 18.2 Net Rating. Push the pace a bit more and try to get more active. Barrett could get downhill a bit more, or, run some pick-and-roll or dribble handoffs with Toppin. Using Toppin as a threat while having Barrett with the ball, could create a bit more space for Quickley to get open from the outside.

Around those three, you place Burks in that group for shooting, self-creation, and ultimately, a veteran who can serve as a safety valve. To clean things up, either one of Nerlens Noel or Taj Gibson, both of which allow Toppin to play more of a stretch role while keeping things tidy defensively. With Noel coming off the bench due to his ankle injury and minutes restriction, he would be ideal, even at less than 100%.

No need to give the good news before the bad news. No need to remind you that R.J. Barrett is 20 years old and in his first playoff series. Barrett is struggling in this series, and it’s a bit concerning to see his game falter as Randle struggles as well. The New York Knicks need someone to come back to help Derrick Rose once again tie this series up as they head back to a rambunctious Madison Square Garden for Game 5.

There’s a bit of give-and-take here. Barrett has to take advantage of the shots being given. He doesn’t look indecisive on offense and continues to look aggressive in looking for his offense when the opportunity arises. However, one bone Thibodeau can throw here is putting him alongside the second unit for stretches, using Barrett, Burks, and Quickley—heh, BBQ—to give Barrett a few more offensive possessions, only without Randle on the floor, hoping the responsibility of being the lead scoring option wakes him up and gets him out of his slump.

As the Knicks move closer to Game 4 and looking at the possibility of heading back home down 3-1, someone needs to wake up. Based on the opportunities being provided, that player will have to be R.J. Barrett.

»READ: Tom Thibodeau still on the hunt for a Trae Young solution