After Series End, Knicks Foundation Looks Towards Building for the Future 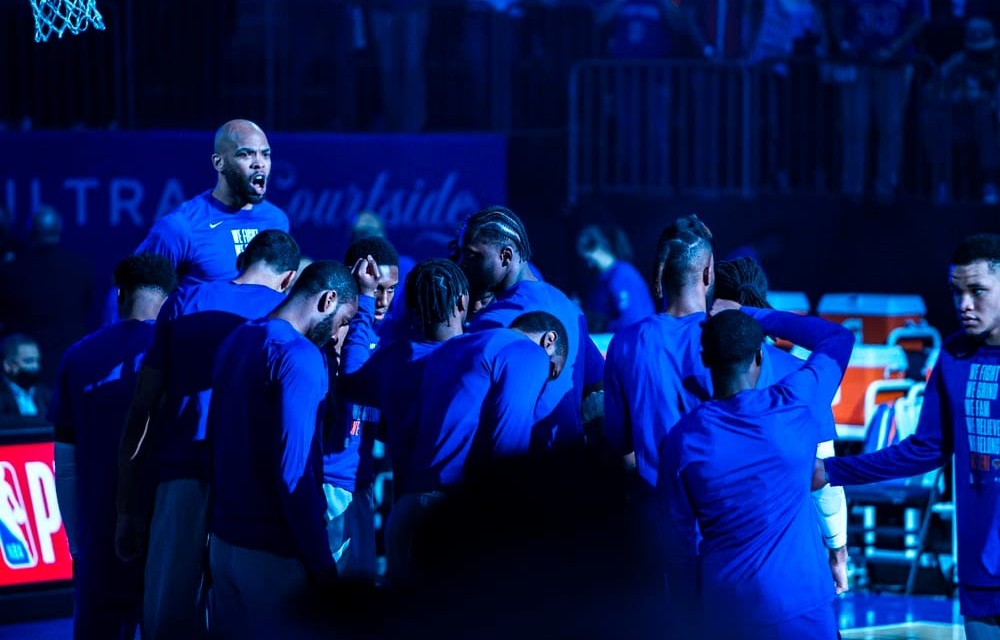 Though the season ended on a sour note for the New York Knicks, the successes of the year now offer them a foundation to build upon.

Julius Randle became the toast of the town just a season after just about everyone wanted to run him out of it. Derrick Rose became one of the most impactful players on the team after being traded for midseason. Tom Thibodeau brought together a “gutted, rudderless” roster and steered the team in the complete opposite direction. New York saw its first winning season and playoff berth in eight years.

Unfortunately, they suffered a rude awakening in the first round at the hands of the Atlanta Hawks. In five games, Trae Young and the Hawks ended the Knicks season. New York, to put it bluntly, got dominated after taking Game 2 at Madison Square Garden. Atlanta had perfectly figured out how to crack the Knicks’ defensive code and completely stifled their offense.

The unceremonious end to the Knicks’ season doesn’t have Thibodeau all that worried. This team was inexperienced from a playoff standpoint, as only a few Knicks had any extensive postseason experience. Thibodeau said that there’s learning to be done for players in their first postseason dance. Experience, he said, is “a big part of learning and, hopefully, we can take that and move it forward.”

But they won’t move forward right this moment. “We need to get away,” Thibodeau said. “It’s a long year and they put a lot into it. So, we’ll take two to three weeks and just get away, decompress, reenergize, and then we’ll start talking about the plans for the summer and what we have to do next.”

When the Knicks do get back to work, they’ll have legitimate expectations facing them. They were the NBA’s feel-good story this season because there were no major expectations for them. What was presumed to be another year of developing their young players and racking up losses turned into a competitive season where they had to fight until nearly the end of the season to secure a playoff berth.

Fighting hard and developing a never-say-die mentality defined this Knicks team. Their scrappiness night in and night out was a key reason for their success. “Our guys gave us everything they had all year long. Very proud of ’em,” Thibodeau said. He also listed a myriad of reasons for feeling proud of his team. “Building a foundation, building the right habits. Everyone getting better—learning, growing, being together. Getting knocked down, getting back up, coming back in the next day,” he said.

The feeling is mutual for New York’s key players, Randle and R.J. Barrett. “I think we’re bringing a brand of basketball back that the city can be proud of,” Randle said. “I’m just proud of us laying a foundation. Laying a foundation for the future, get [sic] the Knicks back on the right track,” Barrett said. The second-year wing expressed a desire to be with the team long-term following the Game 5 loss, which is meaningful to a franchise with severe trouble keeping players around after their rookie contracts.

RJ Barrett said he was proud of how the Knicks laid a foundation for the future.

"Shoot, I'm 20. I'm hoping to be here for a very long time, hoping to win many more games, get to many more playoffs, get championships. I'm hoping for all that." pic.twitter.com/VHy8UNSixn

Barrett’s improvements in his game from his rookie season—namely as a perimeter shooter—made him a viable wingman to Randle, who willed the Knicks to victories on several occasions and won the NBA’s Most Improved Player award. Although his debut playoff performance was poor at its best and utterly miserable at its worst, his efforts were the ones most responsible for pulling the Knicks from the league’s doldrums.

“I still do believe in him,” Rose said, adding that he will “ride with him to the end just like everybody on the team. He got us here.” Rose, one of New York’s pending free agents, wants to run it back. He stressed that the decision may not be his, suggesting that the front office has big plans that he isn’t sure if he’s a part of. While the nature of the Knicks’ offseason moves isn’t being decided now, it will be the defining factor of this core.

This offseason will determine whether the Knicks simply caught lightning in a bottle or have taken their first legitimate step towards title contention in a decade. With several key players set to be free agents, two first-round draft picks, and a sizable chunk of cap space, the New York Knicks front office has plenty of directions to shape the 2021–22 squad.

Now that the New York Knicks are back on the map, they’ll definitely have to improve. Taking the league by surprise isn’t the same as winning when teams have you figured out. And in a season defined by injuries—of which New York was able to avoid outside of starting center Mitchell Robinson—the rest of the league becoming more healthy would make the Knicks’ comeback tour more challenging.

Maintaining a successful team isn’t a foreign in New York dream anymore. The Knicks’ firm identity and attitude have everyone pulling in one direction—and actually moving towards progress. Year One of the Thibodeau era ended with a foundation to build on for years to come. Now that New York has that squared away, they can truly begin building for title contention.