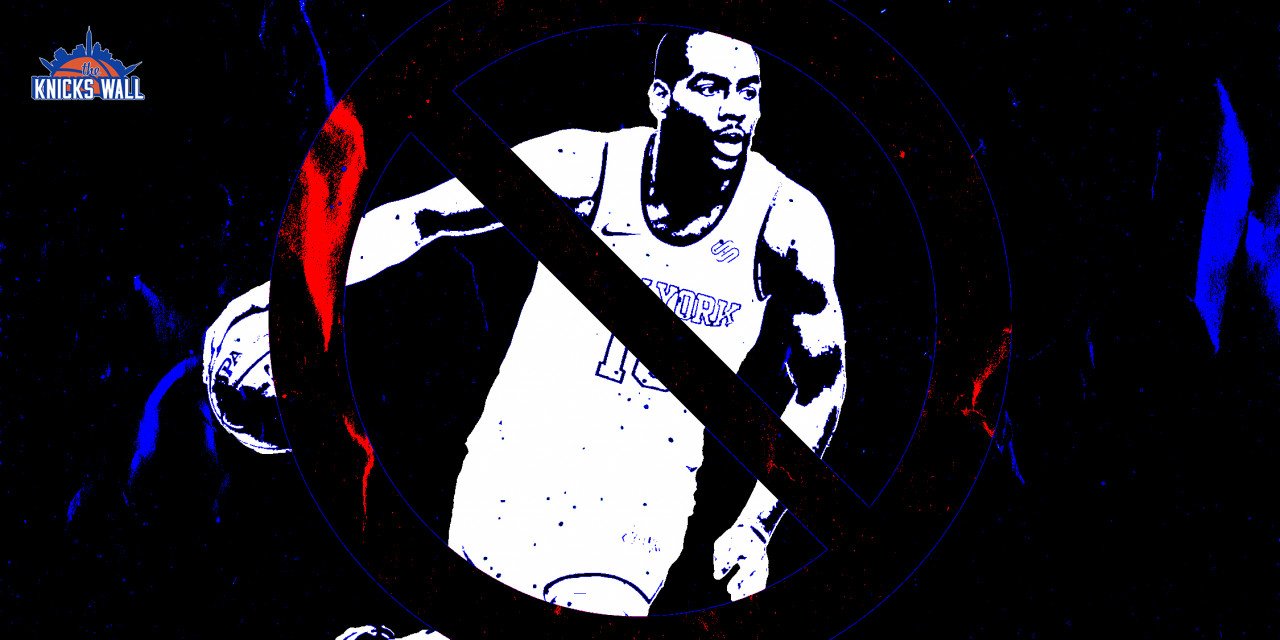 The Alec Burks point guard experiment has been a failure—if he’s to stay with the Knicks next year, it needs to be in the role he played last season.

When the Knicks handed Alec Burks a three-year, $30 million contract this past offseason, it was a well-earned investment off one of the best seasons of the NBA journeyman’s career. Playing an entire season with a team for the first time since the 2017–18 season with the Utah Jazz, Burks thrived in the sixth man role, one he’s become accustomed to throughout his career.

Coming off the bench as either the 2 guard or a small forward most often, Burks averaged 12.7 points per game while shooting 42% from the field and 41.5% from behind the three-point line. When Burks re-signed this past summer, the easy expectation was for the 30-year-old veteran to retain that same role, especially with Kemba Walker and Derrick Rose expected to hold down the rotation at the point guard position.

Well, things came tumbling down when Walker fell out of favor within the rotation, and Rose was sidelined for two surgeries. Rather than go with someone like Immanuel Quickley for the starting point guard role, head coach Tom Thibodeau—who is stubbornly strict with basketball positions—ironically went with Alec Burks for the job.

Having now started in 37 games for the Knicks, the most ever in his 10-year career, the results have shown that this project was doomed from the beginning. Burks’ numbers are down considerably, averaging only 12.7 points on 36.5% shooting from the field and 37.2% from behind the arc in his starts. He’s played 34.1 minutes per start, nearly nine more per game than he was playing last season. Most alarming of all is the fact that his passing numbers have barely moved with the positional change and extra playing time, netting just 3.5 assists per game after averaging 2.8 in his bench role last season.

When you look at the rotations with which Burks has played in his starts this season compared to his play with the bench unit last season, it becomes glaringly obvious that the point guard experiment cannot last any longer than this season. When Burks thrived most last year, he actually wasn’t even playing in the 2 guard role. He was playing an undersized small forward along with Derrick Rose, Immanuel Quickley, Obi Toppin, and Taj Gibson.

When that five-man rotation played for a total of 139 minutes together last season (the most Burks had with any bench combination), the Knicks had a Net Rating of +17.7 points per 100 possessions, the second highest of any rotation the team put on the floor. This rotation emphasized defense and transition, out-rebounding opponents by four and forcing 1.5 more steals and blocks in their time on the floor. They averaged nearly seven more field goals than their opponents, but almost two fewer three-pointers. This was a Knicks-wide problem at the time, as they were fourth-to-last in the league in three-pointers taken.

When Burks was rolled out with that same unit to begin this season, the results were even better. In 89 minutes played with those same four players, the Knicks had a NetRtg of +28.4. While they still averaged nearly eight fewer three-pointers taken than their opponents, the Knicks were far more efficient with over five more made three-pointers in their time on the court. That unit’s overall field-goal percentage was over 10% better than their competition, making them one of the league’s most lethal bench units early in the season.

In Burks’ time with the starting unit of Evan Fournier, Barrett, Randle, and Robinson, the numbers immediately take a turn for the worst. In almost 400 minutes played with them, the team has a Net Rating of -0.9. They’re shooting .03% worse when on the floor, and only making 1.6 more three-pointers than their opponents. Most alarming given Burks’ positional change is that this unit has four fewer assists on the floor, whereas the early season bench unit with Burks netted 1.6 more assists when together.

When it comes to the starting unit with Burks shooting worse, a lot of it has to do with how his shot profile has changed with the new position. Whereas Burks was utilized pretty exclusively as an isolation and three-point shooter last season, he’s forced to drive with the ball far more often as a point guard. Last year, for example, he only took 157 shots within 10 feet of the rim. With seven games still to go this season, he has attempted 194 in that range.

The ones he took last year were far more successful, making them at a 45.2% clip. This year, though, he’s only made 36.1% of them. He’s been forced to take a lot of his shots in tight coverage, with over 28% of his two-point shots coming within 2-to-4 feet of the nearest defender. Burks’ three-point percentage is also down by nearly two, but that seems to be more or less bad luck. He’s made 42.9% of his threes thus far in March after shooting 34.2% on them in January and February.

Alec Burks has them dancing out here! pic.twitter.com/8s1bGR9jEj

With the season winding down and no postseason wishes for the Knicks now, it might be best for the team to finally lay this experiment to rest and find a winning formula for the start of next season. If anything, Friday night’s fourth-quarter closeout against the Miami Heat could have provided a potential solution to the backcourt issues with Quickley and Miles McBride propelling the come-from-behind win. In this one, Burks sat most of the fourth quarter while the two youngster guards combined for eight assists on the night.

If Burks could be moved back to a bench role akin to the one he held last season and early on in this campaign, the Knicks just might rediscover that fire that led them to the fourth seed in the East. With young pieces to be considered for the starting point guard role and a long offseason ahead, anything is possible. But then again, will Thibodeau ever let anything get in the way of what rotations he thinks is right?