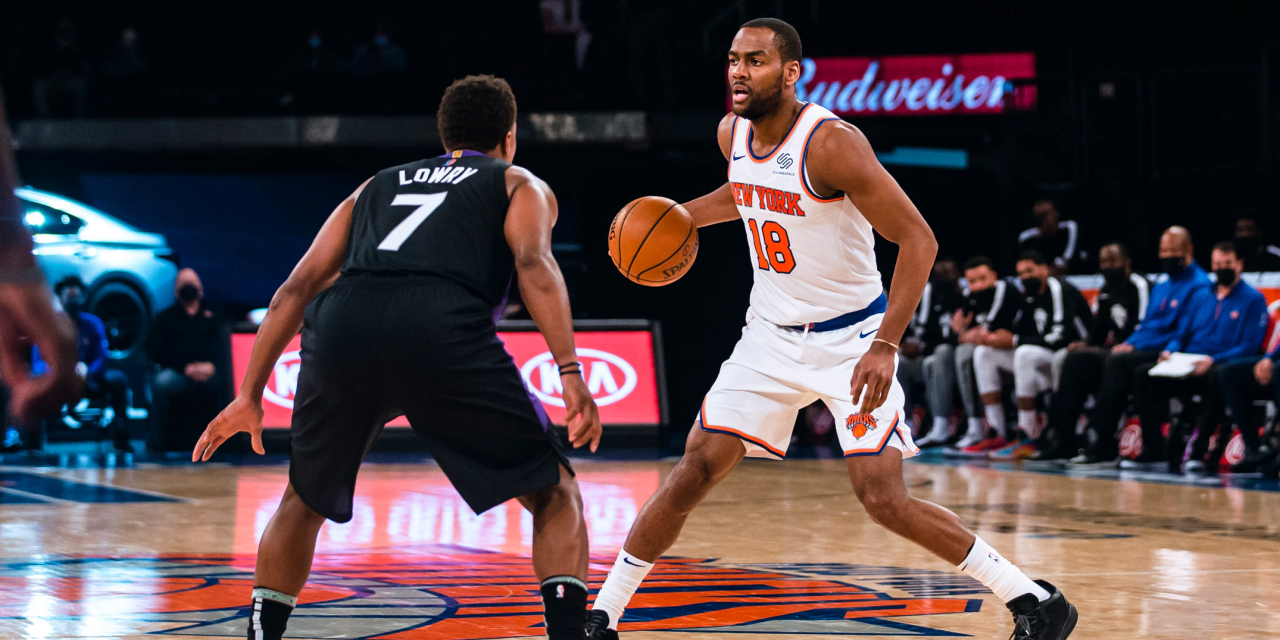 The Knicks’ hot hand in recent games, Alec Burks, will likely sit out for several games due to COVID-19 health and safety protocols. It comes at a time where New York couldn’t be playing better.

DALLAS — The New York Knicks received a dose of unfortunate news on Friday, as shooting guard Alec Burks was forced to enter the NBA’s COVID-19 health and safety protocols and was ruled out for, at least, the road matchup against the Dallas Mavericks.

Alec Burks (health and safety protocols) is out for tonight’s game at Dallas.

Randle is the leading candidate for Most Improved Player of the Year, while Barrett’s evolution is more encouraging each game. That said, the recent play of Burks has arguably been the most surprising individual performance by any Knick in 2020–21.

The 29-year-old has averaged 10.5 points per game over his 10 seasons (comprised of eight years with the Utah Jazz, then stints with five other franchises over the past three years). In 19 games post-All-Star break, Burks has—out of nowhere—played his way into the Sixth Man of the Year discussion. In that timeframe, he’s averaged 14.5 points per game on 41.6% three-point shooting, including seven 20-plus point performances.

He’s also emerged as, if not quite the Knicks’ regular closer, then certainly one of the trusted arms in the bullpen. As TKW’s Nick Scolaro pointed out, Burks—who scored 14 of his 21 points on Wednesday against the New Orleans Pelicans in the fourth quarter—has produced about a third of his points this season in the final frame.

No timetable was placed on Burks’ return, and, per HIPAA laws, the Knicks aren’t allowed to reveal his status. In February, Frank Ntilikina was placed in health and safety protocols over a contract-tracing incident, causing him to stay away from the team for 10 days. Derrick Rose missed three weeks in March with a brutal bout of COVID-19.

“We’re just making sure that we will follow the guidelines,” Thibodeau said about Burks’ immediate status going forward. “And I think it’s pretty common right now that you see there are a number of players that it’s happened to throughout the course of the season. So when you start off the season you prepare for all these situations.”

If Burks tested positive, he would miss at least 10 days for quarantine.

In his pre-game media session on Friday, Thibodeau revealed that several members of the Knicks roster and organization had been vaccinated.

“I’m not sure how many have gotten it, but I know a number have, and a number of our staff have as well,” Thibodeau said. “So I think everyone, like the rest of the country, that’s where everyone’s moving towards, and hopefully we can get back to normal at some point.”

In the wake of Alec Burks being placed in COVID-19 protocols, Thibodeau said the Knicks “have a number of players who have gotten vaccinated…I’m not sure how many have gotten it, but I know it’s a number. I know a number of our staff has as well.” @TheKnicksWall

Friday’s showdown with the Dallas Mavericks offered the first chance to see how the Knicks—riding a four-game winning streak—would handle the absence of Burks. Before the game, Thibodeau hinted at a possible Frank Ntilikina or (gulp) Kevin Knox sighting. Immanuel Quickley fantasy owners might’ve perked up.

Turns out, when you have the two best players on the court, you can overcome the absence of a newly valuable role player. And, when Thibodeau is running the show, there’s a simple solution: just play everybody more.

From the get-go, the Knicks either hung with the Mavs or controlled the game, led by Barrett and Randle. In 41 minutes, Randle, the Dallas native, nearly matched his career-high with 44 points, to go along with 10 rebounds and seven assists. In other words: he was awesome.

Barrett played a whopping 46 minutes (#Thibs), dropping 24 points, including a Burks-ian 13 in the fourth. Overall, the Knicks scored 34 points in the final period.

“We were trying to match up, taking Julius out when they took [Luka] Doncic out,” Thibodeau said post-game. “That group got on a run and R.J. got on a run.”

LUCKY LEFTIES PUTTING THIS ONE TO BED pic.twitter.com/50qmpBH3Ox

Thibodeau tried mixing and matching: He relied on Reggie Bullock for 41 minutes, rode Elfrid Payton for 23 (too many), and used Obi Toppin for seven. Somewhat surprisingly, Quickley only saw just under six minutes of action—enough to be bullied inside twice by Tim Hardaway Jr.

Sadly, Knox didn’t see the floor, though Ntilikina did enter for four thrilling minutes at the beginning of the fourth. He sank a three to put New York up 94-82 with roughly nine minutes to go, drew two free throws on a left-handed driving hook that absolutely never had a chance, and provided solid matchup defense on Hardaway Jr.

“I thought Frank gave us good minutes too, we needed another defender in there,” Thibodeau said.

The Knicks were also buoyed by another strong Rose outing—15 points (7-of-13 FG) and five assists in 25 minutes.

In a way, Dallas proved to be an ideal matchup for the Knicks on this particular evening, beyond the motivating factors fueling Randle. As incredible as Doncic is, the Mavericks don’t necessarily have a secondary wing scorer to cause trouble and require Burks to outplay.

Ultimately, Burks has been a cute late-season story, and we all wish him a speedy return (plus, it’s great to hear the organization is getting vaccinated). In the playoffs(!), Burks will undoubtedly be a valuable two-way veteran piece in close games.

However, as Friday reminded us, the Knicks are driven by their coach, their tenacity, and their two stars. As much as Thibodeau and the locker room can preach “next man up” and praise the depth, their ceiling on any given night is determined by Barrett and Randle.

Next up, the Knicks return to New York for a six-game home-stand, beginning with a rematch against the Pelicans on Sunday. They needed Burks to fend off New Orleans last time around, but, if Randle and Barrett perform as they did in Dallas, compensating for Burks’ absence suddenly doesn’t seem so complicated.