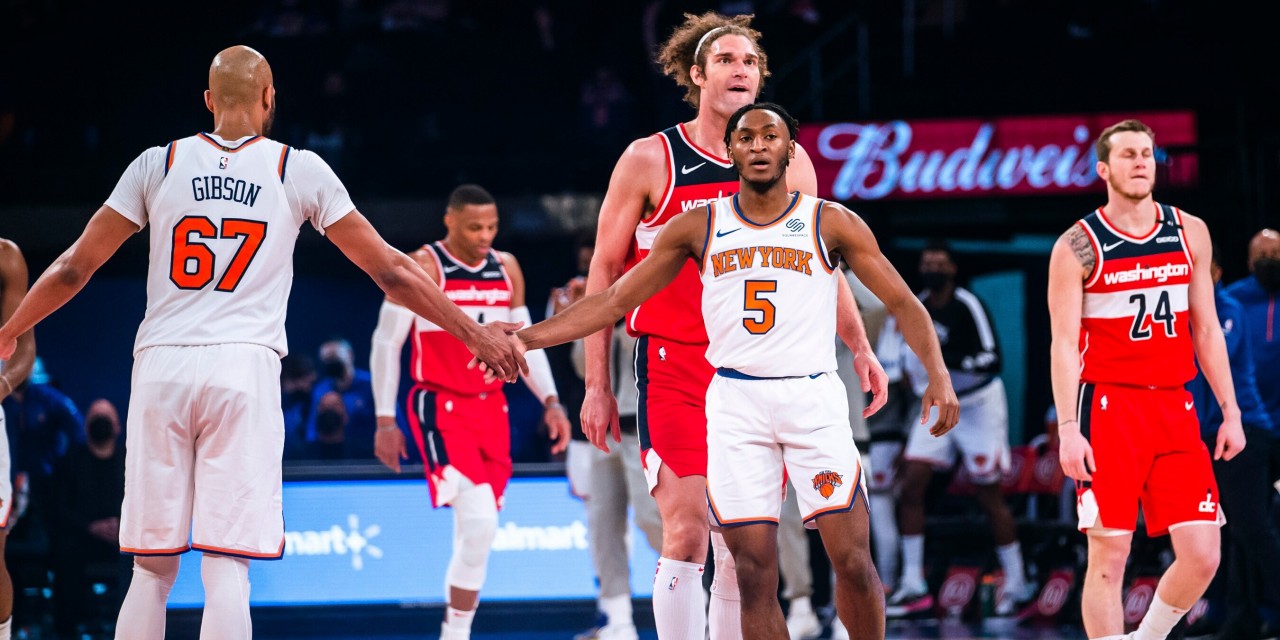 The Knicks reared from an ugly first half to come back victoriously against the Wizards, beating Bradley Beal and Co. for the second straight time.

The New York Knicks (23-22) roared back from a 17-point deficit against the Washington Wizards (15-28) to steal a victory in the closing minutes. After failing to score more than 25 points in a quarter over the first three, the Knicks dropped 39 across the final 12 minutes of action. Alec Burks and R.J. Barrett spearheaded New York’s thrilling comeback with 49 combined points. Julius Randle had an off night with just 13 points, but some lockdown defense on Washington’s dynamic duo of Russell Westbrook and Bradley Beal mitigated Randle’s lackluster game. The final score: 106-102.

Although a well-earned win, it was far from pretty. The Knicks stumbled out of the gate. It was difficult to believe the orange and blue had any chance of coming away victorious during the first half. But credit to this group, they’re warriors who play together and never capitulate no matter the circumstances. Tonight’s win accentuated New York’s collective mental fortitude.

The Wizards competed with a pep in their step for the entirety of the first half. It was apparent the team had Tuesday’s blowout loss against the Knicks fresh in their minds. Randle and Barrett, two standout performers from game one of this double-dipper, struggled to find the bottom of the net, combining to shoot just 4-for-22. Washington blitzed the pairing on nearly every touch, which resulted in some unsightly misfires and turnovers. As the turnovers mounted, transition opportunities accrued for the opponent—the Wizards parlayed seven New York blunders into 10 fast-break points by halftime.

Averaging the eighth-fewest turnovers in the NBA heading into tonight’s matchup at 13.5, this iteration of the Knicks doesn’t have a reputation for being careless with the rock. However, a flaw of this crew that has loomed large all season long has been three-point shooting, and this weakness was on full display across the first 24 minutes. In a year chock full of disastrous displays from deep, New York’s first-half shooting the deep-ball ranked among their worst. Of the 14 treys New York attempted, only one found the net. You read that correctly, 1-for-14—a 7.1% clip. Yikes.

New York’s performance over the opening two quarters was hideous. They failed to play to their identity, and the heart and spirit of this group were nowhere to be soon on either side of the ball. The Knicks trailed 60-45 heading into the locker room.

Such a remarkable comeback effort from the Knicks wouldn’t have been feasible if not for Burks’ heroics. The journeyman has endured an up-and-down campaign after a scorching start to 2020–21, but he appears to have regained his early-season swagger and confidence. He was the only Knick to score in bunches with any semblance of efficiency, netting 27 points on 8-for-18 accuracy. This is the Burks New York needs for the rest of the season—one who is aggressive and assertive. He finished tied for first on the team in free throw attempts with 11 and buried nine of them.

Alec Burks with BACK TO BACK threes and it’s down to a THREE POINT GAME LET’S GOOOO 🔥🔥🔥 pic.twitter.com/za7wCPbeos

Burks as the starting 2 guard ahead of Frank Ntilikina is an option worth contemplating. Lifeless offensive showings plague the Knicks all too often. While Ntilikina impacts the game as a perimeter defender, Burks is far and away the superior scoring and creating threat and addresses a more glaring need at this juncture. Ntilikina deserves a spot in the rotation. However, his stat line tonight highlights why perhaps a reserve role would better suit him. The Frenchman scored zero points and took just two shots. Here’s to hoping Knicks faithful will see an uptick in minutes for Burks after his recent stretch of sizzling play.

The Knicks have Friday off before heading to Milwaukee for a Saturday matchup with the Bucks.