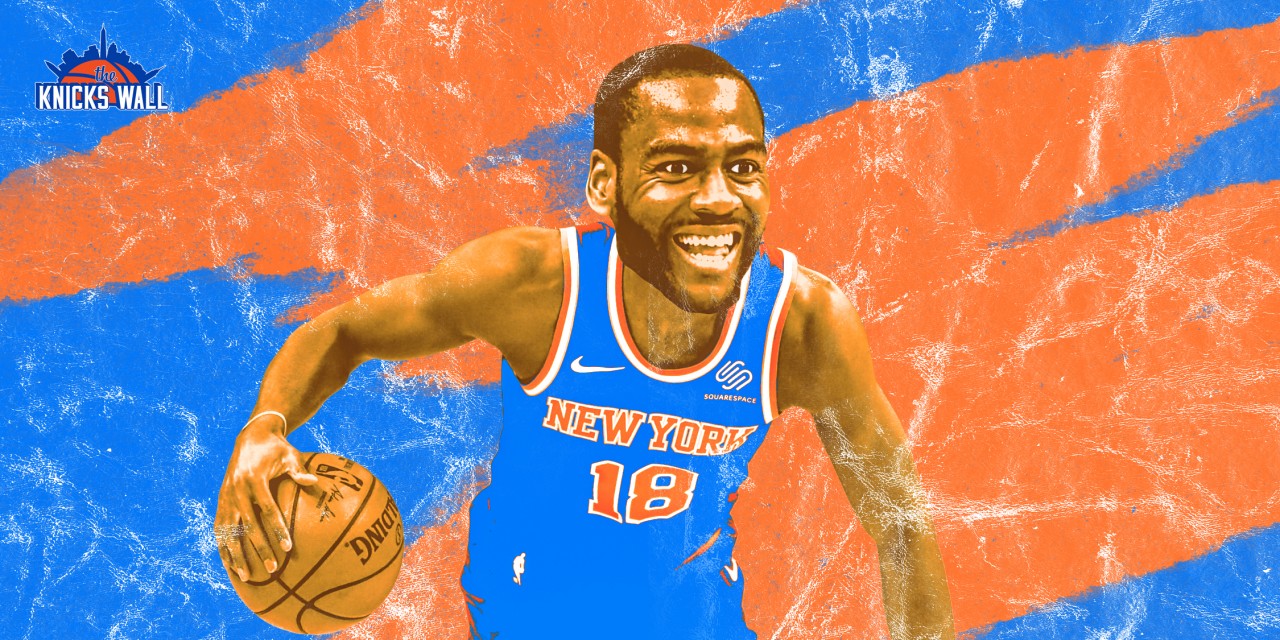 One of the central figures in any fight for three-point shooting for the Knicks is veteran swingman Alec Burks, who has put together nice numbers.

Following the 2019–20 season, one where the New York Knicks infamously entered with four new power forwards, one improvement Leon Rose simply had to make in his first offseason was to add more shooting to the roster. Another hole on the roster last season was shot creation off the bench, where lineups struggled to get good looks with R.J. Barrett and Julius Randle on the bench.

Despite streaky play, nine-year veteran Alec Burks has provided ample shooting support and bench production in his first season with the Knicks, opening the floor for others and helping keep the team afloat while the starters rest.

The journeyman spent his first seven seasons on the Utah Jazz, with the Knicks marking the sixth team he has suited up for since the start of the 2018–19 season. Last year was Burks’ most productive, providing scoring for an abysmal Golden State Warriors team before being acquired by Philadelphia to provide stable three-point shooting. Burks has been able to combine those valuable skills to help the Knicks play their best ball since the fabled 2012–13 season.

Alec Burks is shooting 41.8% on 4.8 three-point attempts per game this year. To put that number in perspective, compare it to the Knicks’ best long-range specialists from last year. The four best shooters from last year’s poor shooting team, Marcus Morris Sr., Damyean Dotson, Allonzo Trier, and Bobby Portis, are all no longer with the organization. Aside from Morris Sr., who was traded in the middle of the season, no Knick shot over the league-average of 36.7% on threes in the 2019–20 season. Now, Burks, Randle, and Reggie Bullock are all shooting 40% or better on 4.8 or more three-point attempts per game.

Not only does Burks’ ability to connect from deep help the second unit offense score points, but it also spaces the floor, creating easier looks for teammates. Last season, the most glaring issue with New York’s offense was congestion. The two primary options, Barrett and Randle, had no space to get downhill. Opposing defenders could easily help off their assignments with no threat of outside shooting.


Burks fills the role of a traditional floor-spacer while also creating his own shot off the dribble. The former University of Colorado star is clipping 38.7% of his catch-and-shoot threes, and cashing in on open looks, making 42.7% of his open threes and 46.8% of his wide-open threes.

His ability to space the floor opens up myriad opportunities for New York’s offense. Barrett and Randle have more room to get downhill. Derrick Rose and Immanuel Quickley, who thrive off the bounce, have more space to create, while big men can easily command the dunker spot without the threat of a wing defender helping down low. The unlocked shooting of the 2020–21 Knicks has helped the team to an Offensive Rating of 108.7 this year compared to 105.9 for the 2019–20 season.

Floor spacing is only part of the value Burks brings to the team. Though he is usually playing against backups, the Knicks Offensive Rating is 2.7 points per 100 possessions better when Burks is on the floor (109.3) compared to when he is off the floor (106.6), per NBA Stats. When he comes off the bench, the team posts phenomenal numbers:

Despite Burks’ streakiness, his ability to succeed as a Swiss Army knife for the bench unit is what makes him valuable. His shot-making ability saves the second unit on a lot of otherwise lost possessions. Take a look at his shot chart from a routine game against the Washington Wizards: 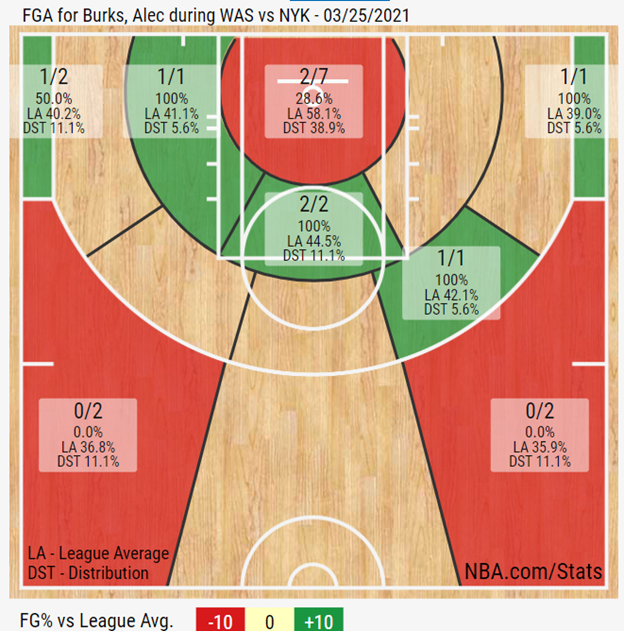 His 8-of-18 shooting in this game will not break any records, but his ability to get buckets from everywhere in a bench unit sometimes starved for offense is essential. These mid-range makes are not the most efficient, but they bail the offense out from otherwise punted possessions. This is evidenced by the fact that the Knicks only won by four against a poor Washington team that is putrid defensively. For a Knicks team that has lost a lot of games despite holding their opponents under 100 points, this ability is essential.

The beautiful thing is that Burks’ reliance on the mid-range shot is circumstantial. Not but two nights later, he lit it up in a pivotal win against the Milwaukee Bucks with a shot diet that would make Daryl Morey sing: 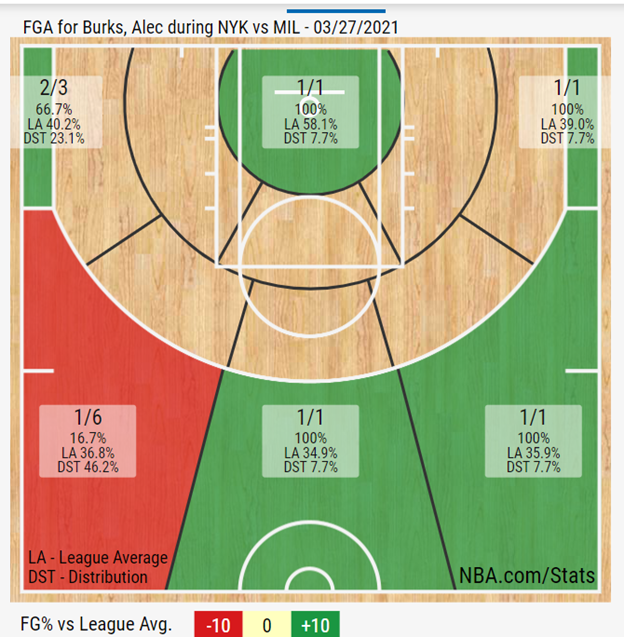 This is the beauty of Burks, and what last year’s team lacked: an offensive weapon that can thrive by spacing the floor for teammates and/or slashing to the rim when opportunities arise.

This is not to say that Alec Burks is without flaws. His streakiness is evident. In the six games from March 16th to March 27th, he scored 19 or more points in every contest. Conversely, in 15 of the 38 games he has appeared in, he’s scored in the single digits.


His most consistent and important attribute has been three-point shooting. The 6’6″ wing has clipped 41.2% from three on the season and shot well on pull-up threes or threes off the dribble.

Burks impressed during March, averaging 15.7 points per game, but he shot 34.5% on field goals in six games in January, leading to an average of only 10.1 points per game during that month. This inconsistency can be maddening, but there is hope that he is settling in and establishing himself as a force on the Knicks, evidenced by his post-All-Star break numbers:

As the season winds down and the Knicks try to establish themselves as a playoff or play-in team, Alec Burks’ consistency will likely make or break a lot of games down the stretch. Still, in terms of a viable, dynamic scoring option off the bench who can space the floor, Burks has made real, significant contributions to this year’s team.


By signing a player who mitigated some of the Knicks’ biggest problems last season, Leon Rose helped vault the Knicks out of the dark ages and back into relevance for the first time since 2013.