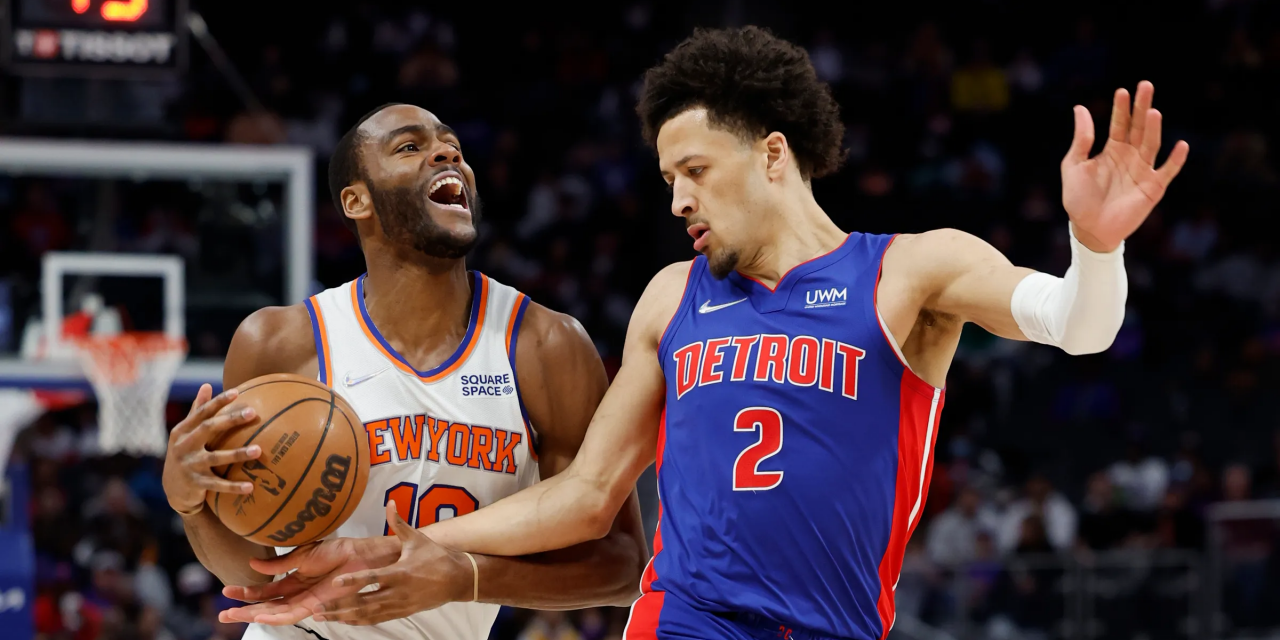 The Knicks let another 20-point advantage slip away, but clutch plays by Alec Burks beat the Pistons, handing New York a three-game winning streak on the road trip.

If you watched this game from wire to wire, you are a real one.

An afternoon game between the New York Knicks (33-42) and the Detroit Pistons (20-55) went exactly as you expected it would go. In the end, the Knicks grinded out a 104-102 victory to complete a clean sweep of their three-game road trip following wins in Charlotte and Miami.

The pace to start the game had the classic Sunday afternoon feel—neither team had any flow on offense through the first five minutes. The energy shifted once Immanuel Quickley and Jericho Sims checked in. Quickley was a perfect 3-for-3 from deep, contributing to a 14-0 run that snatched momentum after the deadlock start.

Tom Thibodeau gave fans a treat to start the second quarter, running out a lineup of Quickley, Sims, Miles “Deuce” McBride, Obi Toppin, and RJ Barrett. The offense took a while to get there, but the speed with which this five-man group plays when they get going is a joy to watch. The group helped keep the control on New York’s side as they headed into halftime with a 59-47 lead.

The third quarter was a plodding disaster. The Pistons stormed out of the locker room with a 12-2 run to start the half. The Knicks offense once again stalled with limited ball movement with Randle and Fournier playing a two-man game, and three others waiting for the ball to come their way. The Pistons started to hit some shots on their way to a 30-point quarter, cutting the lead to 80-79 heading into the fourth quarter.

Win a quarter on the road, and you win the game. Those were the stakes for the Knicks, so Thibodeau went back to the young unit that started the second quarter. The lineup was not as electric as they were earlier, and the Pistons were able to come all the way back to tie the game up at 90 apiece.

Randle checked back in and took matters into his own hands, scoring five points in rapid succession to establish the lead. What followed was generally unwatchable basketball, a potpourri of bad shots, no calls, and turnovers.

For all the general grossness associated with the final quarter, Alec Burks had the best play of the game, a steal on Cade Cunningham with the game on the line after previously knocking down a triple with 45 seconds remaining to give the Knicks a perfect 3-0 road trip.

Immanuel Quickley is Him.

Quickley picked up where he left off Friday night in Miami, checking in and promptly connecting on a pair of three-pointers to help create some separation heading into the second quarter.

An underrated part of Quickley’s game of late is on the glass. In addition to his 12 first-half points, Quickley pulled down six rebounds. What makes his rebounding so dangerous is that when he grabs a board, he is ready to run.

That willingness to run is why he and Toppin make such a great pairing, bringing a Patrick Mahomes to Tyreek Hill dynamic on the open floor. Quickley must start seeing 30 minutes per game the rest of the way, the results have become too good to ignore.

As said as it is to say, watching Julius Randle play basketball has become a chore.

Randle’s return was not some grand event, instead a feeling of dread, a return to the status quo. The energy and ball movement is simply not where it needs to be when Randle is on the floor this season. Through three quarters, the Knicks looked their worst with him, and he did not seem to get the memo on playing uptempo with a lot of passing.

Instead, Randle forced his action, getting up 15 shots that produced 15 points. When Randle does play with a teammate, it has become almost exclusively a two-man game with Evan Fournier. Fournier, after becoming the new single-season franchise leader in three-pointers, has hit a bit of a slump, shooting 30.0% (9-for-30) on the road trip.

To his credit, he did score five big points late to stave off the Pistons, but overall, watching Randle play basketball lately is not fun anymore.

Obi Toppin continues to flourish during the home stretch of the season. With improved defense, and the ability to do this with ease should at least set the stage for a major role increase next season.

It is a quick turnaround for the Knicks, who return to The Garden for a Monday night tilt against the Chicago Bulls.