All Eyes Are on the Future in New York 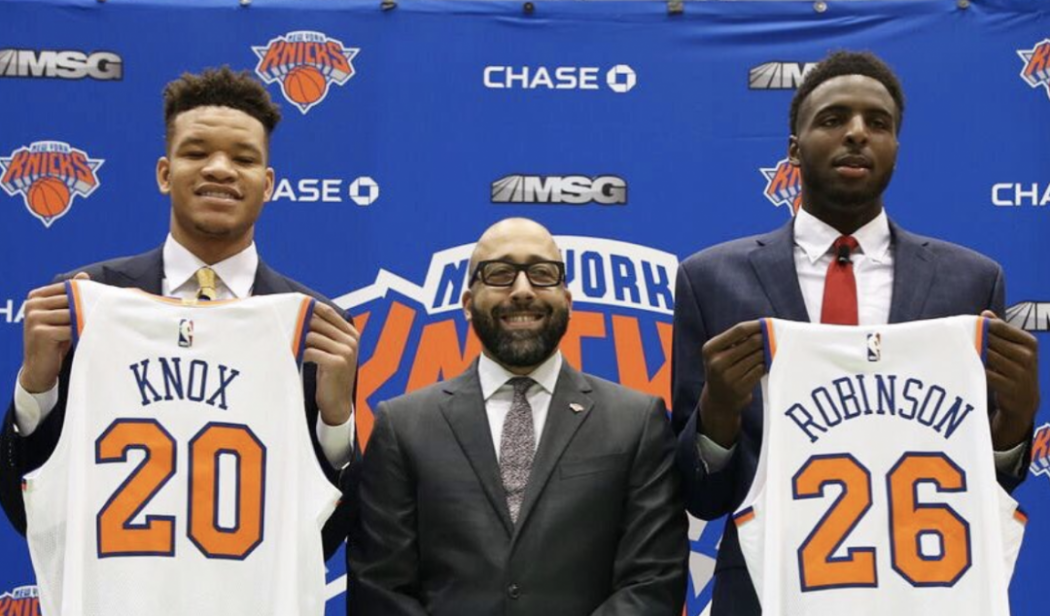 The Knicks introduced Kevin Knox and Mitchell Robinson at a press conference today, and Kyle Maggio was there to see it all.

On a cool summer afternoon in Westchester, the gaze of all important members of the New York Knicks organization were set on the latest installment of the future of the franchise.

At Friday’s press conference, the topic of discussion was focused on one central point: development. Team President Steve Mills, general manager Scott Perry, and new head coach David Fizdale all preached similar sentiments, as you heard the same words today as Perry & Co. have used since starting their jobs; patience, rebuilding, player development, and building a culture. The move for Kentucky’s star freshman, Kevin Knox, wasn’t just for basketball purposes, Mills stated. He claimed it was more than that. Knox’s demeanor, his attitude, the way he communicated on and off the court appealed to this newfound culture that the front office has been tasked with building. When pressed for why they went with Knox, Perry said “Kevin represents a lot of how we want to play the game. He’s long, can play multiple positions, and his upside is tremendous.” He went on to say “there’s a strong development of culture here,” and said that’s why coach Fizdale was hired.

As for Kevin Knox, he was excited, and eager to get to work. New York’s latest building block was hungry for the city but self-aware enough to know where exactly he needed to improve his game. When asked, Knox said “As young as I am, I know there’s a lot of work to do. I’m going to work with the player development coaches and make sure I stay in the gym, stay with the coaches.” When pressed about the weaknesses of his game, Knox smoothly answered that he’s been working on his defense and his ball handling a lot, which were weaknesses identified by most draft experts heading into the draft.

As for the boos, Knox stated he paid them no mind, and laughed about it with Knicks’ star Kristaps Porzingis when he received a call from the recovering big man.

Head coach David Fizdale had plenty to say about the Knicks new forward. Much has been made of where Knox will play and will be effective, but Fizdale simply noted that, “I said the same thing about Kristaps. I’m not labeling him, I’m not putting him in a box, so don’t ask me.” That quote in particular should stick out to Knicks fans. Since Kristaps Porzingis arrived in New York, fans have clamored for the young Latvian to start, or at least play large minutes, at the center position. Fizdale’s on-court approach is more modern, a small-ball type philosophy. The idea of Knox slotted at the power forward position, with Porzingis at center, should make any Knicks fan salivate. As for how quickly he expects Knox to make an impact, what his minutes and role would be like on the team, Fizdale stated he expects Knox to make an impact “immediately,” but “there will be no handouts.”

Perhaps the most interesting quote of the afternoon was when Fizdale was asked about the young guard, Frank Ntilikina. When asked about a veteran guard being brought in for Frank last season, and if he would do the same for Knox, Fizdale scoffed at it, stating, “I’ve got no problems playing him, starting him, whatever ends up coming out of it. I wouldn’t have had no problem doing that with Frank. These guys have to swim now, and there will be some bumps, bu they have to learn to swim through it.”

The last quote of note was Fizdale alluding to forwards Courtney Lee and Tim Hardaway Jr. not starting this upcoming season. When asked if Knox could possibly start, Fizdale looked around at various media members and asked if they knew who was starting at the three. One said “Courtney Lee, Tim Hardaway”, to which Fizdale responded “and how tall are they? 6’5″? And they have to guard LeBron. Durant. Those are the threes we have in this league, so I think he’ll have a very good opportunity to start.”

As a whole, the front office has been putting their money where their mouths are of late, which is a fun change of pace. Perry, Fizdale, and Mills have all spoken about getting younger, longer, faster, and more athletic, and the actions are matching the words. There is a strong sense of patience, due diligence, and an emphasis being placed on player development that this franchise has lacked for what feels like ages. Fizdale is firmly planting his flag into this franchise, and he wants to make his presence known to this roster. From the youngest player to the veterans on this squad, everyone was put on notice today. There will be no handouts. Nobody is the assumed starting player at any position. Every player will have to scrap, claw, and work to develop and improve if they want to play on this team. The theme of the afternoon wasn’t one of egos, or drama, but an understanding that this is a long-term plan that everyone needs to be on board for in order to succeed. Kristaps Porzingis won’t be back on the court for several months, so for now there’s ample time to work on developing the youth on this roster. It was not explicitly stated, but the goal is not the playoffs next season, which should go without saying. The goal is to take this stable young guys and mold them as well as Fizdale & Co. can, and head into the 2019-2020 season with roster full of young players who have taken strides and are looking for more.

For once, the goal isn’t to win now while peddling out a mediocre roster. For once, the focus is on the future and what could come of it if the Knicks just take this slow and build the right way.