How Does Allonzo Trier Pry Himself From His Post-Injury Slump? 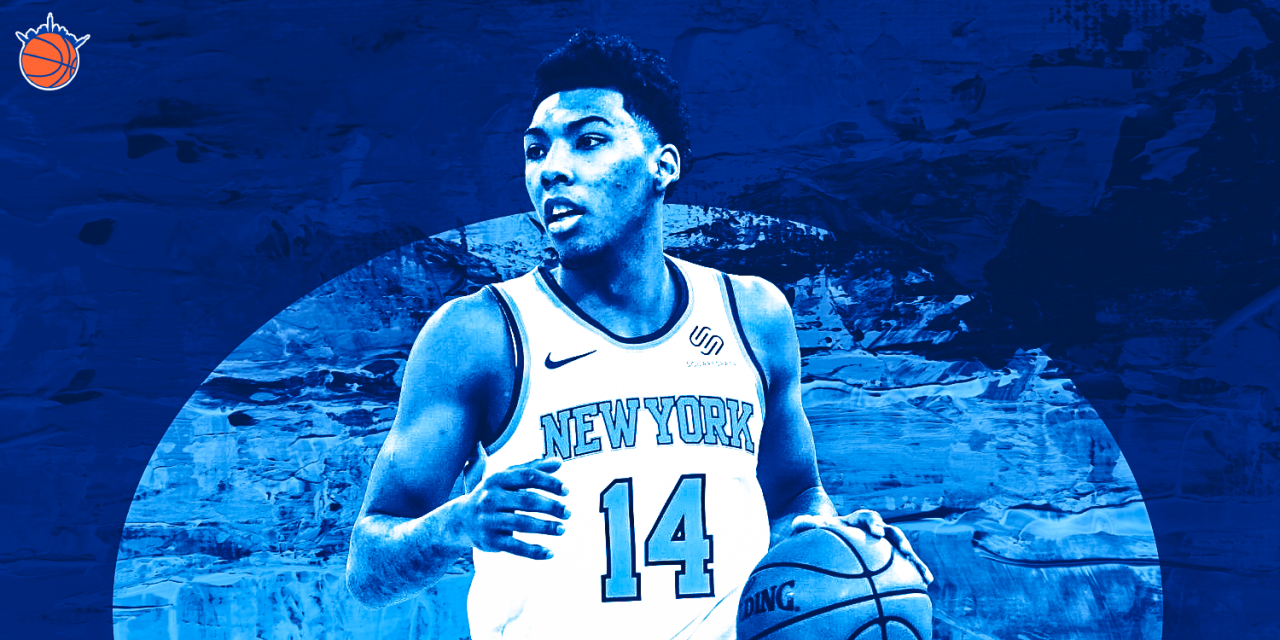 Allonzo Trier’s struggle to get back into the flow of the game since his injury has harmed the team and the undrafted rookie.

Allonzo Trier began his Knicks career confident and comfortable in a role meant for the elite. The almost 23-year-old undrafted Arizona product averaged 13.2 points per game while shooting almost 45 percent from long distance in November. Trier has dazzled NBA fans with elusive step-backs and hesitation moves to get by his man. Trier has also captured the eyes of peers with his stop-and-go slashing and ability to pull up with a hand in his face. Even with Coach Fizdale tinkering nightly lineups, Trier wasted no time displaying why he belongs in the Knicks uniform. At one point, he was playing a team-high 25 minutes per game while shooting 49 percent overall in the Garden. However, like most rookies, Trier was bound to come back down to earth.

His return, after missing seven games with hamstring problems, has been mostly uninspiring. Trier is rushing shots. He’s bricking the same shots that made him a star two months ago. While shot attempts haven’t taken a huge dip, the most problematic issue with Trier right now is his continued shooting slump. The month of December and into the new year have shown his vulnerability as a dominant, isolation player. Iso Zo is currently shooting 10 for 38 overall. He has failed to score 10 points in six straight games, and he’s seeing a declining number of minutes per game on the floor (around 16.5 since his return).

Fizdale attributed Zo’s slump to teams figuring out how to contain him. As you can see in the game versus Denver, Trey Lyles read Zo’s attempted bunny from the moment he took off. Lyles was able to get a clean block by getting back on defense. In the next play, Trier uses the step-back to create space but Utah Jazz’s Raul Neto keeps him at bay, forcing Trier to attempt a difficult shot.

Zo is a critical piece to the Knicks’ bench. While Fiz tried to ensure all the young players get opportunities to learn from mistakes and improve on their weaknesses, improving a few facets of Trier’s game can complete the makings of a legitimate NBA sixth man. How can Trier make the most of his minutes on offensively frigid nights?

The Knicks are the league’s worst in terms of moving the ball. They are barely notching 20 assists per game after being in the middle of the pack last season. Trier is a part of this trend by virtue of his very moniker. Isolation basketball has been the bane of Knicks fans’ existence. The roster construction is currently burdened by multiple isolation players. It’s especially frustrating to watch a great player force bad shots. What Trier and his teammates have to do is feed each other.

Take a look at a simple bucket facilitated by Trier’s unselfishness in the paint. Watch how Trier dishes to Frank Ntilikina on the move. Next, he gets trapped by the Bucks’ Malcolm Brogdon and Thon Maker, and rather than give up the shot, he gets the Knicks a bucket. With defenses sending the double team and cutting off the baseline more often, there will always be an open man to whom Zo can distribute the ball. Finding the open man is a skill that will be invaluable in Trier’s career as the first man off the bench.

At Trier’s apex, 41 percent of his shots overall were tightly contested. To illustrate how incredible Trier was, here is the Wizards’ Bradley Beal’s shooting stats versus defenders. Beal is hitting tightly contested shots at a 50 percent clip. By comparison, not only was Trier taking the shots of an elite playmaker, but he was knocking them down. Streaks like that rarely last for rookies.

To say Trier has been rusty is an understatement. Part of that may be coming back from injury, but he can quickly turn things around by diversifying his shot selection. For example, what stood out about Trier’s career-high performance versus New Orleans was his affinity for the paint. Instead of settling for inaccurate long balls, he took advantage of the space inside. Ideally, the Knicks will see a little less iso-ball from Trier. This is highly likely given Luke Kornet is starting to help space the floor.

The other small detail in having a smarter shooting selection is letting a play come to you. Per NBA Stats, Trier has a low efficiency percentage, shooting between 15-18 seconds on the shot clock. When you look at that stat by itself, the logical conclusion is that when Trier brings the ball up, he’s over-thinking his own shot. Trier could set the offense. He’s capable. However, his inability to see the floor is seen in the bad shots he takes far too soon. Tim Hardaway Jr. has a similar problem. This makes it tough for both of them to be on the floor simultaneously.

The best recommendation to strengthen Trier’s shot selection is to get his teammates involved early in the game clock rather than later. Other Knicks, like Kornet and Noah Vonleh, have found their rhythms offensively. Trier can shoot himself out of this slump. And I think the strongest way to do that is to maneuver where teammates to feed him in his most proficient spots on the floor. Do it early.

Remember Langston Galloway? Going undrafted, the Knicks gave the then 23-year-old product out of St. Joseph’s an opportunity in a season that was a wash. Similar to Trier, Galloway had a sound arsenal of offense. But unlike Trier, Galloway was able to contribute on the defensive end. The similarities don’t end there , but Trier has to apply that fancy footwork to helping on defense. Far too often, he’s given up after getting lost on the switch. He becomes a statue on the perimeter. On the season, he’s second-to-last in steals on the team. He had a single steal in December. That’s embarrassing! Once Trier becomes a more active player on defense, his teammates will find him in transition for easy, open looks.

Shooters have to keep shooting to get back on track. We’ve been here with Hardaway Jr. We’ve seen it with past Knicks players. The league’s most intriguing undrafted player is no different. One must acknowledge that it’s difficult for Trier to get back to where he was when there’s no consistency in minutes. The main goal for getting out of this slump is for Trier to maximize what little minutes he does get by helping his team in other ways. Doing the aforementioned things will ensure an uptick in Trier’s floor time, and the offense will inevitably make an electrifying return.