Allonzo Trier Is Pushing Himself into the Rotation Conversation 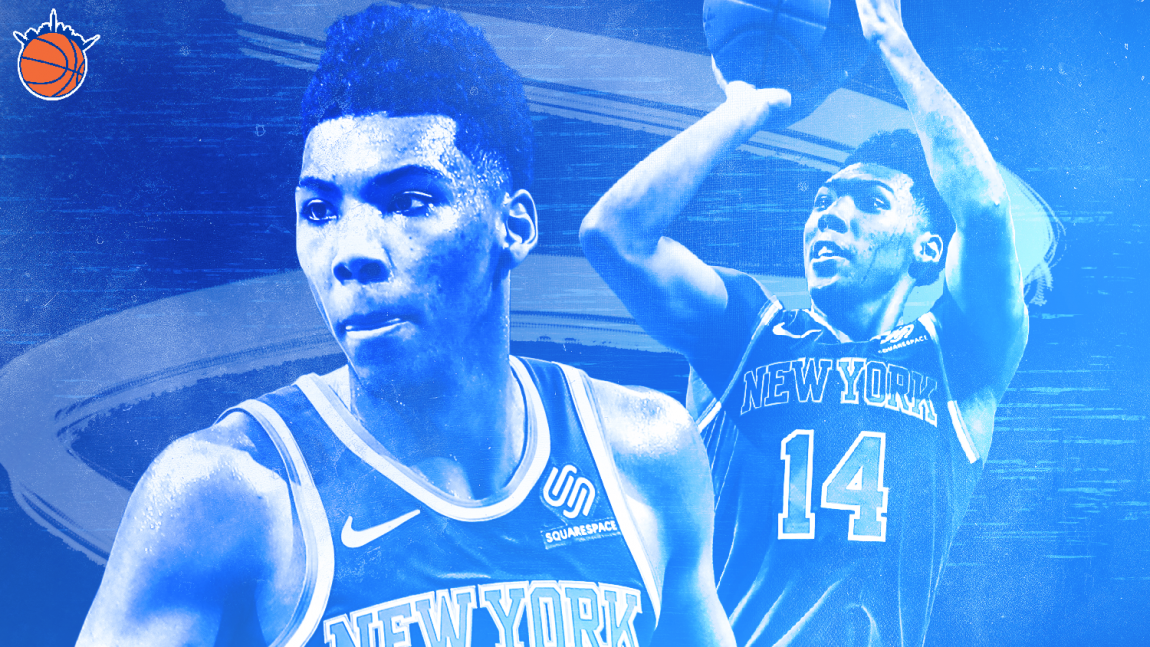 Preseason standout Allonzo Trier has turned heads with his isolation playing, forcing himself into the discussion for guards. How can Trier improve and make the most of his rookie year?

The time has come to acknowledge that Mitchell Robinson was not the only diamond in the rough the Knicks unearthed this summer. Kevin Knox fit that description, given he could be a great selection at nine, but I’m not referring to him either. I’m talking about Iso Zo. How Allonzo Trier went undrafted truly boggles the mind. But damn am I happy the Knicks are not among the 29 teams that dropped the ball.

Even if you were the most casual fan of college hoops you likely heard of Trier’s name during Arizona games, especially in the waning minutes. There are some guys you watch in college and can tell that they are the alpha of their respective teams, and that is exactly what Zo was at ‘Zona. For Scott Perry and company, who had Trier on their radar before the draft, to get him at such a bargain is a massive win.

Trier has returned the front office’s faith by making them looking like geniuses. Despite the preseason hype, Trier has done nothing but look irreplaceable. Even his 20-point second quarter in Brooklyn looked like something we are going to be occasionally treated to. If you’re looking for a 20-point outing that doesn’t look legitimate, please refer to Emmanuel Mudiay’s highlights against the Warriors last season.

One key thing that has stood out during Trier’s preseason run was the versatility of his repertoire. He sets up shop near the free-throw line where he pulls up a lot, but he seems to feel comfortable at any spot on the floor. He is not bashful about attacking the rim. He has no quarrels stepping back for a three or running the floor for a transition basket.

The greatest asset Trier has aside from his unrivaled bravado is his energy. Every time he takes the court, he has been balls-to-the-wall. That energy has not just carried over to the defensive side of the ball, but has been a spark for whoever he is sharing the floor with.

That’s the most ironic part of Allonzo’s emergence. His iso-centric playing style, which should only benefit him individually, has been more beneficial to the team. When the team transitioned into the rebuild, iso-ball and all players that resembled it (most notably Carmelo Anthony and J.R. Smith) were purged from the roster.

The problem that created is there are not a lot of guys who can generate their own offense, especially with Kristaps sidelined. Zo does not have that problem. He can be a one-man show if asked, yet his aggressiveness can be used to sets others up.

Then there are times when he simply needs no help.

Before any naysayers call fluke, need I repeat that nothing Zo has flashed is out of the ordinary. This is not Jeremy Lin coming from the clouds to string together a series of 30-point games, nor Mudiay finishing a layup without hitting the deck. There is consistency in Trier’s play. Zo’s precocious start becomes easier to explain when you realize what a grinder he is.

Don’t take my word for it. Listen to NBA training savant Chris Brickley, per Instagram:

“After being undrafted (which is crazy) & picked up by the Knicks, I remember [Trier] texting me ‘We have team workouts almost everyday but I want to get in the gym as much as possible whenever you have the time.’ Weekday nights, weekend morning & nights, Zo put in as much work as possible. …”

That’s the type of work ethic that you want around when rebuilding a culture. Trier’s play has caught the eyes not only of fans, but of David Fizdale too:

Fizdale’s infinite green light is a bucket-getter’s paradise. Trier is not short in the confidence department, but having your biggest fan be your head coach allows you to be yourself on the floor. Fizdale said that much after the game in Brooklyn, acknowledging that Trier’s play has put him in position to make the 15-man roster.

There is no question Trier has earned his spot, but his addition means a subtraction somewhere. Right now the Knicks have Trier signed on a two-way contract. That allows him to spend up to 45 days with the team (including practices) before being sent to Westchester for the remainder of the G League season.

The Knicks could choose to wait out a potential Courtney Lee trade or Joakim Noah stretch before making a decision. Still, someone will be losing minutes once Trier is officially on the main roster. But who?

The correct answer is Mudiay. No one has shown less with more opportunities this preseason. Trier has been able to do any and everything we could have hoped to see from Mudiay. His ability to create for himself has been useful with a bench mob devoid of similar shot creators. The most intriguing pairing for Trier also happens to be a key piece to the Knicks’ rebuild puzzle—Frank Ntilikina.

Trier’s offensive aggression complements Frank’s lockdown defense in a way that Mudiay’s can’t. They have not shared the court a ton, but the seeds are there for a fruitful future together.

Frank starts the break with the SWAT on one end and Zo finishes it with the tough and-one on the other pic.twitter.com/didcNIrxEw

Unfortunately, Fizdale’s kindness and keenness for Mudiay makes him an unlikely candidate to be shown the door. That could be bad news for someone at the bottom of the pecking order like Ron Baker. Trier’s presence cuts into any spare minutes Baker could have hoped to see.

If Baker is the odd man out, it would be a missed opportunity to pair Trier with a fellow high-energy guy. Think of times when the starters look sluggish. I could not imagine two better guys to call off the bench than Zo and Ron. Not only do they share a similar experience of being undrafted after strong college careers, they both infuse energy the minute that they step on the floor.

This could all be remedied by a Lee trade or the inevitable conclusion of the Noah saga. As Trier’s stock continues to spike, the Knicks may seek a resolution in the more immediate future, before Zo can command a larger contract. That leaves Fizdale and Perry with a tough decision to make at the end of the week.

But let’s not get it twisted. To quote the legend Marlo Stanfield, these are some of those good problems. For years, interesting young talent has been hard to find—now the team might have too much. The 2018 draft could end up being the watershed moment for the new era of New York basketball. The rookie class of Kevin Knox and Mitchell Robinson alone was reason enough to get excited. Now add Iso Zo to the mix. The future has arrived, and not a moment too soon.