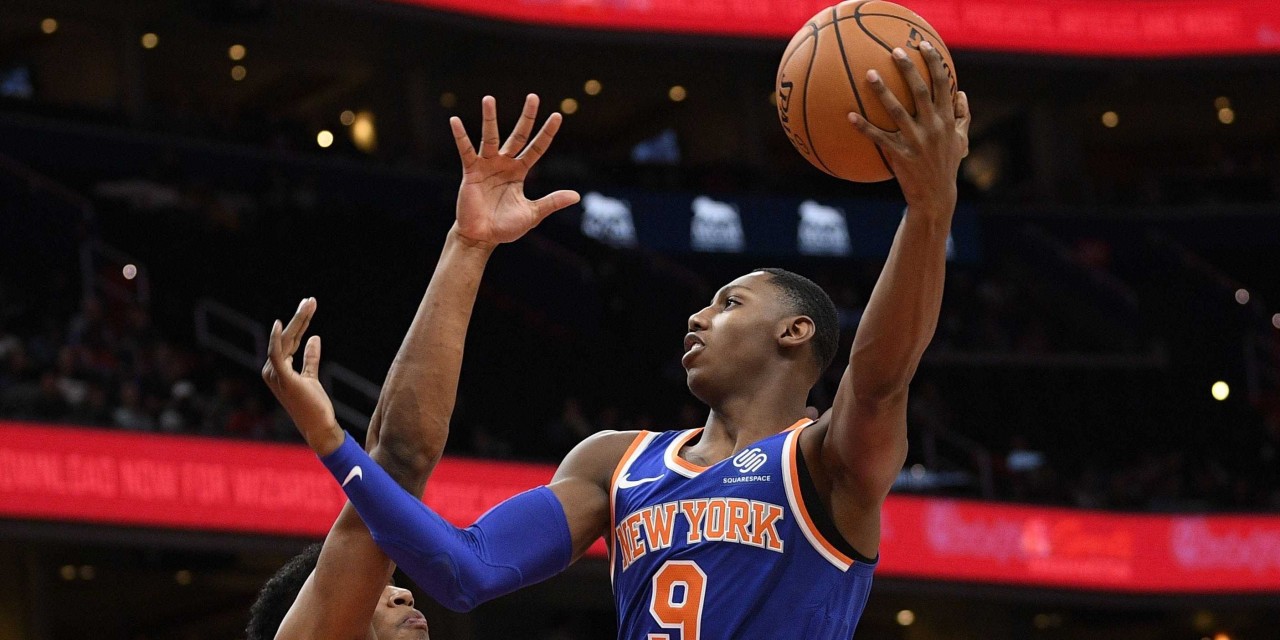 The Knicks went 1-3 in preseason competition, tuning up for the regular season’s start on Wednesday, but how did David Fizdale and Co. do?

The Knicks wrapped up their preseason on Thursday with a loss against the Zion Williamson–less Pelicans. The real fun begins on Wednesday with a matchup against the San Antonio Spurs in their house.

Before the Knicks’ regular season tips off, let’s grade how each player (who played in multiple games) fared in the preseason.

After a rocky showing in Summer League, everyone was on the edge of their seat to see how rookie R.J. Barrett would perform against NBA-caliber competition.

The third overall pick in the 2019 draft showed impressive strength and dexterity on drives to the rim (which occurred very frequently). He kept his composure on every attempt and shot 69.2% from inside five feet, according to NBA Stats. His defense and playmaking were solid as well.

Overall, though, Barrett was confident, composed, and didn’t show too many signs of fatigue despite playing more than anyone in the entire preseason, averaging 37.4 minutes over four games. He’s ready for the big league.

Morris was brought to New York because of his dog mentality and his scoring abilities. Both were on display in the preseason.

Morris was ejected from the first preseason game for hitting his defender in the head with the ball. He played just 19 minutes in that game but poured on 17 points on 6-of-12 shooting (including 3-of-4 from deep) as well as seven rebounds.

Despite being fifth in minutes per game with 25.7, Morris was the Knicks’ leading scorer in the preseason with 17.3 points per game. His efficiency has been very impressive: 52.8% from the field and 50.0% from three-point land.

His playmaking was somewhat spotty. He looked to shoot whenever he touched it, but also was able to find the open man on occasion. His defense and rebounding were both pretty strong.

Although Morris was the Knicks’ last free-agent signing, he was their best player in the preseason.

New York’s best free agent signee was undoubtedly one of the most impactful in the preseason.

Julius Randle was second on the team in scoring with 16.3 points per game on 43.1% from the field and 43.8% from three. He is one of the biggest proponents of bully ball, and it showed as he drove into the lane time after time—resulting in several and-ones across all four games.

Julius Randle in his office. Get used to this. pic.twitter.com/pyKIlZflfh

Randle’s defensive rebounding and playmaking were positives, and he wasn’t a complete liability on defense, but many see his overall performance as a little bit disheartening. He was expected to perform at—or at least close to—an All-Star level, because of how good he was last season. Though he flaunted his versatile skill set, Randle never seemed to take over the game at any point.

Perhaps as he gets more comfortable with the team Randle will show how dominant he can be; if the preseason was any indication, Randle will not be voted into the All-Star game.

Mitchell Robinson’s preseason was a mixture of good, bad, and ugly.

Combine all these factors and you get a somewhat disappointing preseason performance from a guy many predicted could take a big step this season.

Last season, Kevin Knox looked about as raw as a basketball prospect can be. But from what we’ve seen in the preseason, it seems as if his game has matured.

He looked much more collected with the ball. Rather than throwing up a shot or hopelessly throwing himself down the lane, he used some fakes to draw separation, held onto the ball as he drove down the lane and took contact, and moved decently well without the ball.

Knox moving without the ball makes me cry tears of joy pic.twitter.com/50c2PWDAg8

Knox’s playmaking and defense still leave much to be desired, and the stats don’t confirm his game has matured: he shot just 37.9% from the field (but also 35.7% from behind the arc with 48.2% of his overall shots coming from long range).

Grading Dennis Smith Jr.’s performance in the preseason is somewhat tricky. He was dealing with a back strain that kept him out of New York’s first two preseason games.

However, he performed poorly, posting averages of 6.5 points, 5.5 rebounds, and 4.5 assists on 17.6% shooting over two games. He passed up open three-pointers several times and wasn’t very effective on defense.

Yet, for some reason, the analytics all suggest Smith was one of the most effective players New York had. He led the team in Offensive Rating, Net Rating, and plus/minus. Although these stats are by no means enough to declare Smith was one of New York’s best player, they show that Smith had some positive impact.

Numbers are known not to lie, but watching Smith didn’t leave anyone with the impression that he played “well.”

Just like Smith, Frank Ntilikina was ineffective on offense. He averaged a measly 5.3 points on 28.6% field goal shooting.

However, unlike Smith, Ntilikina performed very well on defense. He was a total pest on the ball, especially down the stretch of a close game against the Atlanta Hawks. He put the clamps on Trae Young in the fourth quarter.

His passing was good throughout the preseason, and he looked much more aggressive on offense than he has in the past. He also had plenty of big plays down the stretch of the Atlanta game.

Yet, as was Ntilikina’s problem the last two seasons, his scoring was just plain bad. What’s really sad is that he probably played the best out of all the point guards, and he shot under 30% from the field. Yikes.

Elfrid Payton was named starting point guard for the first two games but proceeded to do nothing to warrant keeping him there. He shot 2-of-14 from the field through both games.

His defense looked pretty good; he had some nice assists and led the team in steals with 1.3 per game. Still, he was largely ineffective. His plus/minus of -14 is the worst on the team by far. It’s the same story with his NetRtg of -26, which is the worst of all the players that appeared in multiple games.

Payton was reportedly promised the starting point guard spot in free agency, but based on his performance from the preseason, it would be malpractice to let him start over Smith or Ntilikina.

Allonzo Trier picked up right where he left off last season: in isolation. His “Iso Zo” moniker is still very appropriate.

In the Knicks’ last game, Trier’s scoring helped the New York nearly steal a win, as he dropped 16 points in the fourth quarter. The Knicks were down by as much as 12, but Trier kept the game competitive. New York lost, but the game would have been over sooner if not for Trier.

Nothing about Trier’s game looks different from last year. His playmaking wasn’t very exciting, and although he competed on defense, he wasn’t locking anyone down.

Portis isn’t known for his 1-on-1 scoring, but he used a good amount of possessions to take his defender on. He got some nice buckets but also forced some bad shots.

His rebounding was solid; he ranked second on the team in rebounds per game with 7.3. His defense and playmaking were decent, which was more than expected.

There wasn’t much to expect from Taj Gibson. He was brought in to handle business in the paint, and that’s exactly what he did.

However, the business in the front came with a little party in the back: Gibson shot three-pointers—and they went in. True story!

Gibson went 3-for-5 from behind the arc in his three preseason games. He averaged 15.8 minutes per game as well as 10.7 points and 5.0 rebounds. His defense was good as well.

Overall, Gibson played his role well, and that’s all he was asked to do.

Like Gibson, Ellington was expected to continue doing what he’s been doing his whole career: shoot. He did just that, shooting 37.5% from three and making 2.3 per game, tying Morris for the team-high.

Unfortunately, he dribbled just as well as fellow spot-up shooting extraordinaire Klay Thompson. He tried to score off the dribble with poor results.

Still, Ellington knows his role is to catch-and-shoot and play defense. His shooting was quality but his defense was wasn’t.

Many of David Fizdale’s coaching decisions from the preseason bring about more questions than answers.

One questionable move was playing 19-year-old Barrett the most minutes on the team. Although Barrett was projected to be NBA-ready by the start of the season, Fizdale played him more than any player has since the Heatles were still in existence.

RJ Barrett averaged 37 minutes a game for the Knicks, most in preseason since 2012.

"Man, he's 19," Fizdale says of fatigue concerns, "I never got tired at 19. I got him down to 35 tonight." Says Barrett is hard to get off the floor but he'll start managing his minutes better.

Especially on a team where everyone has a reason to get playing time, Fizdale should have found some ways to reduce Barrett’s minutes. It’s a stroke of luck that Barrett didn’t get injured.

Another point of criticism: what exactly is the offensive gameplan? The Knicks as a team don’t seem to have any tasks or plans on offense.

Some teams look to push the pace, others look to get their shooters open, others rely on off-ball movement to find cutters, etc. In a league with so many unique and fascinating offenses, New York doesn’t seem to have one.

A lack of an offensive identity and over-reliance on iso-ball were problems that plagued last year’s Knicks and which haven’t been solved. It may take building up some team chemistry for any progress to show, but as of now, progress is minuscule at best.

Finally, the last play of the last game made everyone scratch their heads. With 2.9 seconds remaining in a one point game, the ball was inbounded to Randle outside the three-point line. There were no off-ball screens or back door cuts, just Randle in an isolation situation 30 feet from the hoop with under three seconds.

Fizdale was given a pass for last year’s questionable coaching decisions as he didn’t have much talent to work with. This year is different; he has plenty of legitimate NBA talent.

The preseason isn’t exactly a crystal ball that can predict a whole season’s outcome, but Fizdale needs to make sure his 82 regular-season games look better than his four preseason ones.