Among Knicks Point Guards, Immanuel Quickley Has Set Himself Apart 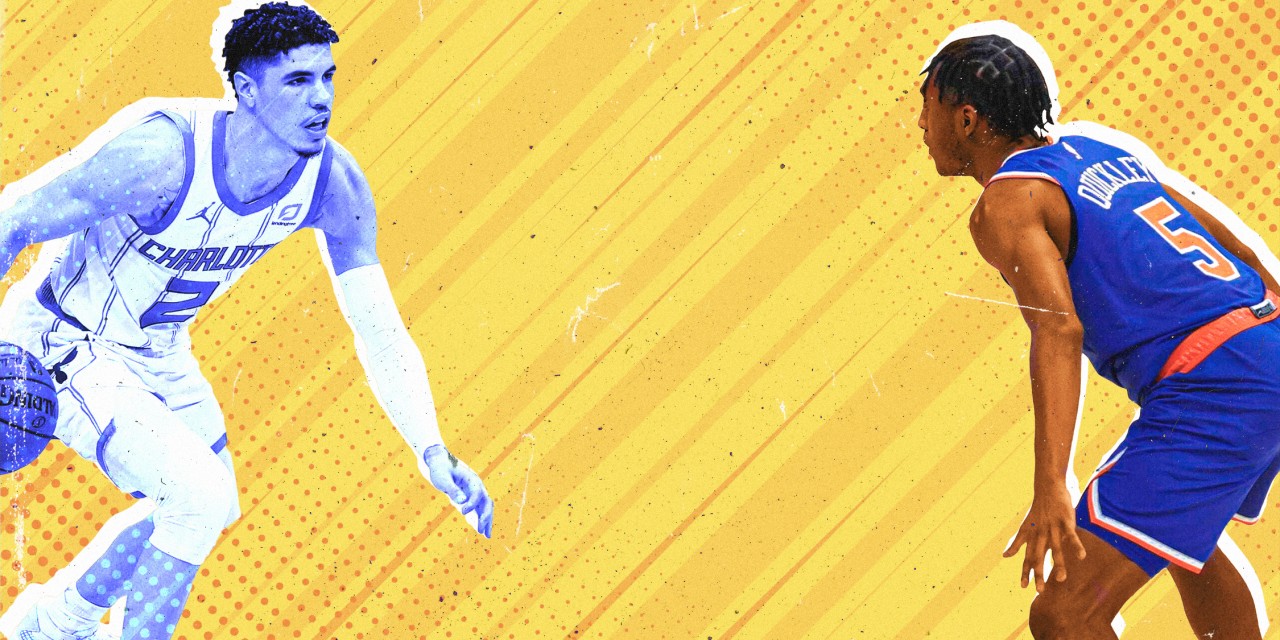 The impact that Immanuel Quickley has had in his first 11 games as an NBA pro, both on the floor and among the New York Knicks’ fanbase, is one of the worst-kept secrets in New York right now. The immediacy and professionalism of his production are even more impressive considering he was widely panned as a reach when drafted (I admit to being less than pleased when they called his name, to my shame), but maybe the most impressive part of all is the simple fact that through his play and his approach, he has convinced Tom Thibodeau, legendary distruster of young players, to give him real minutes from the jump. Of course, the Knicks have been severely short-handed, with Austin Rivers missing training camp and the first four games of the season and Alec Burks and Frank Ntilikina missing the last 11-12 games, so it remains to be seen how his minutes will shake out once the guard rotation is at full strength, but it’s hard to believe at this point that he’s in for any kind of substantial playing time downgrade.

After all, not only has IQ averaged 23 minutes over his last five games, but after a rocky first outing that saw him go 1-for-10, he’s also delivered in a major way. In his last four contests, he’s averaging 17.5 points, 4.3 assists, and almost a steal per game while shooting 45% from three on five attempts, and all in just 21 minutes a night. But more than his raw numbers, what really separates Quickley from the rest of the options at point guard on the roster is his ability to truly function as a two-way player.

I touched on this before the season began, and, without patting myself on the back too much, the first 15 games of the season have shown the assessment to hold water, more or less. Elfrid Payton, the designated “adult in the room,” is a decent defender by virtue of having a large body for a point guard, but dies on every screen and loses his man constantly off-ball, and his shooting is so cataclysmically bad that he scuttles entire offensive quarters due to how little defenders care about him on the perimeter. Frank Ntilikina had shown signs that the shooting improvements we saw at the end of last season had stuck, but in addition to still being far too passive to be the full-time point guard, the sample size is tiny and he continues his unfortunate streak of letting tiny mystery injuries derail large chunks of his seasons. Dennis Smith Jr., despite the stentorian, trying-a-little-too-hard training camp hype machine, seems to never have gained the trust of Thibodeau.

Even the combo guards on the roster are similarly flawed. R.J. Barrett has made significant improvement, but Austin Rivers is a mediocre defender and Reggie Bullock, while willing, is too weak and prone to lapses to actually be considered a good defender. The same can generally be said about Alec Burks, though he’s a little stronger and more athletic than Bullock.

All of which is why Quickley’s ability to play within himself while contributing on both ends is so important. It’s quite easy to see how he impacts the offensive end of the floor: his willingness to make quick decisions, ability to space to the three-point line and beyond, and unselfish floor game makes the rest of the team absolutely hum with activity.

Immanuel Quickley is putting on a SHOW and Reggie is actually knocking jumpers down 😭 pic.twitter.com/uF2JfxGWZM

And while it’s not quite as readily apparent, the same is true on the other side of the floor as well. Quickley is the rare rookie who constantly talks in the less glamorous end of the floor, pointing out unmarked assignments, calling out switches, and always staying in close communication with Thibodeau, with whom he can often be seen in conversation between plays.

1 thing you love to see from Sunday: Quickley makes a classic rook mistake immediately upon making his debut, RJ goes full vet mentor to help settle him down, then Thibs and Johnnie Bryant call him over to give him some pointers before sending him back out there pic.twitter.com/5Y9P1Hotb9

He also loves picking up full court after a made basket, if only to provide some initial pressure to make the ball-handler uncomfortable, a trick that worked well against Killian Hayes in the two preseason match-ups with Detroit. He has the ability to contest shots with his long wingspan, and given his foul-drawing craftiness, it can be reasonably expected that he’ll become a very good charge-drawer in time.

Quickley stops Rose on the break, Obi picks up the loose ball & hits RJ for the bucket pic.twitter.com/6fdAGlKqWc

Granted, there have been occasions, such as Monday’s game against the Magic, that the bench unit, with which he spends most of his time, hemorrhages points. Playing Rivers, Kevin Knox—even with his improvements on defense—and Obi Toppin at the same time can be like playing with a lit match next to a puddle of gasoline, and Quickley was guilty of forcing the action on both ends of the floor, which is why Thibodeau yanked him in favor of Payton (I’m not defending the decision, just giving the reason why it happened). After all, Quickley is still a rookie, and even the smartest rookies make plenty of mistakes.

There’s also the issue of his size and lack of vertical athleticism. Though I’ve been pleasantly surprised with his lateral and north-south explosiveness with the ball in his hands, it can’t be ignored that being 6’3″ and lacking the ability to explode vertically hurts him when defending drivers or trying to recover after being beaten. Like most rookies, he’s skinny, which means bigger guards can either go over or through him. This is one place where Payton has an advantage: even though they’re about the same height, Payton has a full 20 pounds of muscle on Quickley, making it harder for him to be pushed around as much.

But that one differentiator shouldn’t be enough to keep Quickley out of the starting lineup. Though all lineup data at this point is a very small sample size, it’s hard to ignore the fact that four of the Knicks’ five best lineups in terms of limiting opposing teams’ efficiency have Quickley as the point guard. Likewise, the two top five-man units in terms of Defensive Rating feature Quickley, including the version of the starting lineup with Austin Rivers at the two and Quickley at the one instead of Payton, which also happens to be the lineup with the top Net Rating of any lineup to play in at least five games together. Again, the sample sizes are tiny, but they back up what we see on the floor.

Though he may not have come into the season with the reputation of a LaMelo Ball or even a Cole Anthony, Quickley has produced in just about every possible way. He leads all rookies in points per 36 minutes, is third in assists and free throw attempts, and leads the class in free throw percentage by a good margin. His 5.3 assists to 1.8 turnovers per 36 are incredibly encouraging for his projection as a possible point guard. He’s also third in assist percentage and 11th in effective field-goal percentage. Among point guards in the class, only Haliburton has performed on both ends of the ball as consistently and constructively as Quickley, though LaMelo has shown more on the defensive end than he is usually given credit for.

At this point, it’s hard to understand why Elfrid Payton is starting over Quickley other than just general seniority. As mentioned on last week’s TKW Podcast, not only would adding Quickley’s shooting (in addition to the shooting of Burks, whenever he returns) help R.J. Barrett and Julius Randle dominate even more than they both currently are, putting Payton on the bench unit, where he’d be surrounded by shooters and two roll threats in Obi and Nerlens Noel, would help his offense seem a little less clunky and do-nothing. They might not have realized quite to the extent that it was true when they drafted him, but it seems clear that as the lone two-way point guard on the roster, this team needs Quickley, and badly. The only question now is when Thibs will finally relent and let the good times roll.