An Unwaveringly Slow Pace Is the Knicks’ Chief Identity 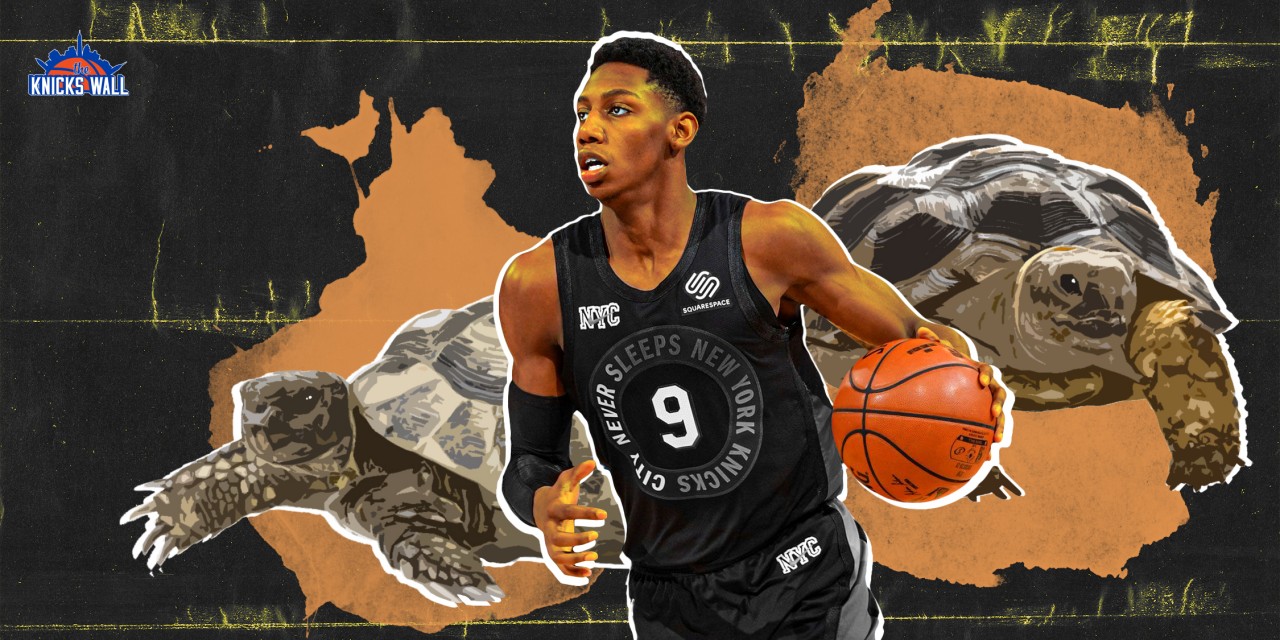 Tom Thibodeau’s Knicks are playing at a gruelingly slow pace, bringing down opponents with them. It may not be sustainable for winning either.

After riding high on a winning streak that brought the team to .500, the New York Knicks have fallen back to earth at 8-11. It couldn’t last forever, but it was nice while it lasted. It begs the question, how did it occur in the first place? What were the Knicks doing that other teams just couldn’t figure out? Or figured out, but weren’t able to stop.


The answer is simple: The Knicks have been playing as if they’re stuck in the 20th century, and they’ve forced their opponents to as well.

Currently, New York ranks dead last in pace at 96.5. For context, the average pace for all NBA teams is 100.1, as of this writing. For more context, this pace is comparable to the 1991–92 and 1992–93 NBA average. This is as close to the ‘90s Knicks as it gets, folks. They’re playing slow and averaging very few possessions; sounds like the Knicks we’ve seen for the last six or seven seasons.

The difference this season has been that their competition has been doing the same. In 18 games, the only team to have a pace over 100 against the Knicks were the Toronto Raptors with a 101 pace factor. In other words, the overwhelming majority of teams who played the Knicks did not have 100 possessions in the 48 minutes of play. But wait, there’s more!

When it comes to the Knicks’ offense, it largely boils down to Julius Randle playing consistently well and R.J. Barrett fighting tooth and nail against regression. The Knicks rank 25th in field goal percentage and 24th in three-point percentage. Awful, yet unsurprising considering the Knicks are mostly made up of front-of-bench and end-of-bench level players.

Even as prolific as they’ve been rebounding, they still only rank 16th in second-chance points. At the same time, they are only allowing 11.6 second-chance points per game, the ninth-lowest amount in the NBA. It also helps that Barrett ranks second in rebounds among shooting guards, and Randle ranks second among power forwards, just behind Domantas Sabonis. Who knows how much time they’d kill if the new 14-second second-chance shot clock rule wasn’t implemented yet. According to analytics from Inpredictable, the Knicks average the most seconds per possession at 15.3, passing up “okay” shots to make “still okay” shots.

It’s difficult to find 30-second clips of the Knicks probing the defense, but generally, a Knicks possession follows a simple course of action. The lead guard begins by testing the muster of their defender. If they can get into the paint before the interior defenders have time to rotate, they take the close-range bucket. If that fails, they’ll try again to break down the defense. If they were able to get a switch after their first time penetrating the defense, great. The Knicks guard corps isn’t particularly fast, except for Immanuel Quickley, but they know how to attack the mismatch when they have one. In the clip below you can see this, along with their dangerous offensive rebounding come alive.

Thankful every day for @23savage____ pic.twitter.com/Xx5vH6qvWs

The Knicks’ dangerous game of milking the clock can largely be attributed to ball-stopping extraordinaire Elfrid Payton. This year, he’s averaging a career-high usage at 22.5%, per Basketball-Reference. Fortunately, under head coach Tom Thibodeau’s leadership, both Randle and Barrett have higher usage percentages than Payton. With their most productive players handling the ball the majority of the time, the Knicks give themselves a chance to score by leveraging their tough shotmaking abilities. Neither are spectacular long-range threats. From three, Barrett is shooting 28% on the season and Randle is shooting 35.6%. It’s a career-high for Randle, but still below the current league average of 36.5%. Yet, somehow they’re keeping teams’ three-point shooting to 31.7% on the season, via NBA.com.

The big, vague question is: how sustainable is this? The concentrated answer is: no, teams shooting 31% from three against the Knicks is not sustainable. Two of the last three teams the Knicks played shot higher than 34%. Teams will likely get more comfortable with their rosters and improve, as well as finally give the Knicks an inkling of respect on the court. The 2020–21 season isn’t too far removed from LeBron James flipping a water bottle on the sideline.

The other answer, however, is yes, the rebounding is sustainable, although it may not always lead to wins. When the Knicks grab over 50 rebounds they’re 5-1. In their game against Utah on Tuesday, the Knicks’ shooting woes combined with Rudy Gobert’s tyrannical rebound total of 19 were the main culprits of New York’s second-half meltdown. Similarly, in the Knicks 106-103 loss against the Cavaliers, Andre Drummond’s 23 rebounds were huge. The Knicks can’t instantly become a better jump-shooting team and it’s unrealistic to expect that, so leveraging the strong rebounders that they have is their best bet at sustained success as currently constructed.

Clearly, the Knicks still have room for improvement. They’re last in the NBA in assists per game, and the previously mentioned shooting numbers need to improve if the Knicks want to stay in the hunt for a playoff or play-in spot. Either way, what they’ve done has worked, to an extent. If they can continue making tough shots and keep making teams take them, they might be alright. Forcing teams down to their level has been crucial in their success this season. Look for Thibs to keep that flat ball of an offense rolling.