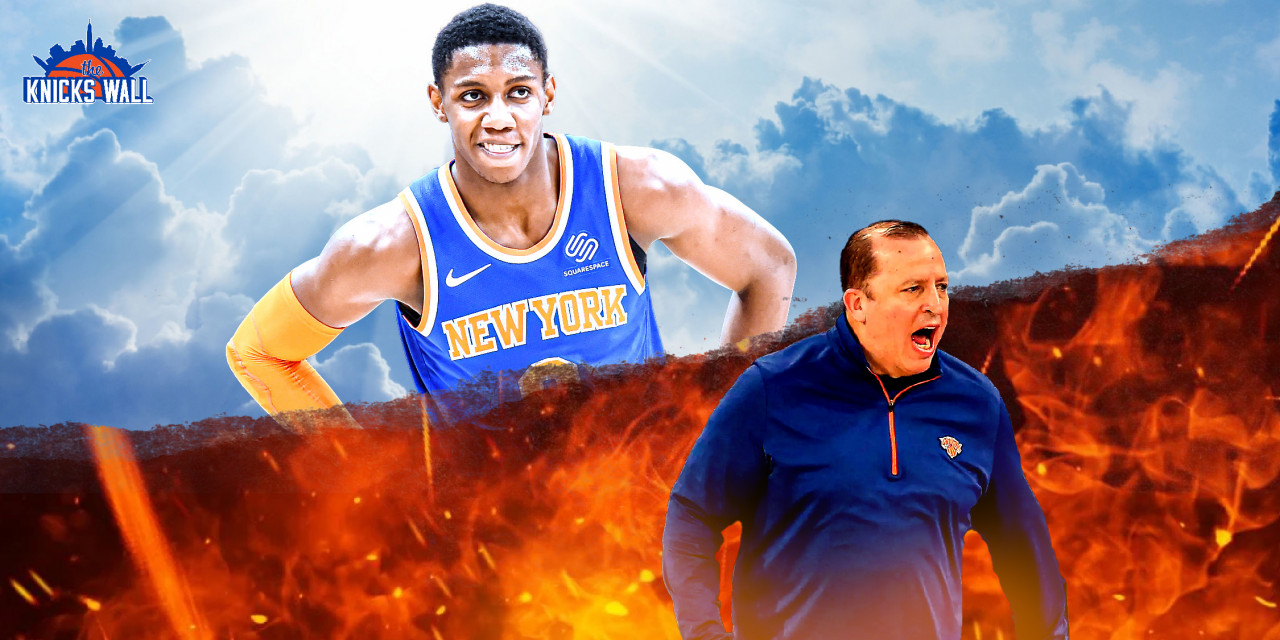 With the 2021–22 season in the peripheral, what are the best and worst things that the Knicks can have happen to them?

The 2021–22 NBA season is officially here, as Media Day took place on Monday, and training camp is beginning this week. For the Knicks, this season presents an opportunity to build upon what was started last season, a four-seed in the Eastern Conference playoffs. It’s a chance for the organization to prove that last season wasn’t a fluke, but rather the start to turning a page on what has been an abysmal last seven years prior.

The exercise of determining the best and worst outcome for an NBA team is a difficult task, given that there are so many different variables to account for. Of course last year, the Knicks were a team that seemingly had no hope outside of RJ Barrett, Mitchell Robinson, and Obi Toppin. As a result, I predicted them to go 18-54 on the season.

In what was one of the most improbable successful seasons in my years of watching sports, Julius Randle went from looking like he could be traded for a second-round pick to making the All-NBA Second Team. It didn’t matter that Robinson missed most of the season, and Toppin ended up playing a minimal role. Derrick Rose was traded for mid-season and ended up being one of the best sixth men in the league. Immanuel Quickley ended up being an All-Rookie caliber player, and guys like Reggie Bullock, Nerlens Noel, and Alec Burks stepped up. This led to the Knicks going 41-31, which would have been well beyond what I considered to be the best outcome for the team.

So as we were shown last year, improbable improvements with certain players, injuries, and now even COVID-19 vaccine policies (won’t affect the Knicks but could affect teams they are competing with) could impact the floor and ceiling of the team. However, for the sake of this exercise, I will take injury probabilities and players missing time for other reasons out of this and strictly go by the players on the roster. Let’s get to it.

On paper, it appears that this Knicks team got a lot better in the offseason. They are going from Elfrid Payton starting at point guard to Kemba Walker. It doesn’t need to be discussed in detail for what feels like the one-millionth time, but having a player who is a major threat to score and shoot will help every single player in this starting unit by tremendously bettering the spacing on the floor.

Additionally, Evan Fournier will be replacing Reggie Bullock in the starting lineup. Fournier shot 41.3% from three-point range last season while averaging 17.1 points per game, whereas Bullock shot 41.0% from there while averaging 10.9 points. While Bullock was great, Fournier is just more of a complete offensive scorer. Mitchell Robinson will also likely be back in the starting lineup after playing just 31 games last season. Noel played phenomenal while filling in for Robinson, but Robinson is much more of a threat in terms of catching lobs and more versatile on defense.

The Knicks also re-signed Rose, Burks, and Noel, while drafting Quentin Grimes and Miles McBride. Those three that were re-signed will likely be on the bench unit, along with Immanuel Quickley and Obi Toppin. Given that Grimes and McBride will likely be the 11th and 12th men on the roster, the Knicks’ depth is off the charts, amongst the best in the NBA.

When discussing the best-case scenario for this team, it’s that they repeat as a top-five defensive team in the league (fourth in Defensive Rating in 2020–21), which should be possible under Tom Thibodeau, while also being a top three-point shooting team in the league. The Knicks were third in the NBA in three-point percentage last year at 39.2%, but with Walker and Fournier added to the roster, this number may get better.

Additionally, the best-case scenario is that individually, Julius Randle continues to play like an All-Star, while also shooting effectively from the three-point line. RJ Barrett takes another step forward and goes from averaging 17.6 points to closer to 20 while continuing to shoot greater than 40% from beyond the arc. Kemba Walker returns to close to his All-Star form from 2019–20 and both Knick rookies from last season, Quickley and Toppin, take steps forward to help drive this bench unit.

The last major question mark individually is Mitchell Robinson. Truthfully, he’s not the player who many Knick fans think he is yet. He still needs to work on not fouling as much on defense, and actually guarding players well, not just being an elite shot-blocker. If he can take a step forward and be an improvement from Noel last year, that’ll be a major help for this team.

Back in late August, the Knicks’ win total opened at 41.5 with -110 odds both ways. It hasn’t moved since, indicating bettors expect a pretty big step back for the team compared to last season when they posted a .569 win percentage (and exceeded their win total by 19.5 games in a 72-game season). There is value in betting on the Knicks. They only need a .512 win percentage to hit 42 wins in an 82-game season. If they manage to mirror last season’s performance, they will wind up with 46 or 47 victories. While online sports betting in New York has yet to launch, those who live in Connecticut will be able to make online bets starting early October. Knicks fans who live in that state can start doing their research into the online platforms.

If all these things were to happen, which would be the best-case scenario, I think the Knicks could win 50-51 games. In my opinion, the 41.5 win-total projection is definitely a little bit low. Last season, the Knicks were on pace to go 47-35 if the season was 82 games, not 72. They assuredly didn’t get worse from last year, but the Eastern Conference did get a lot better. So while winning 50 games would technically only be better than the pace of last year by about three games, it would feel a lot better than that.

The Hawks, Heat, Bulls, Pacers, Hornets, and Cavaliers will all likely be a lot better this season, being on the same pace of wins in terms of last year will be difficult. However, in an ideal situation, the Knicks win 50 games, the Sixers take a step back with the loss of Ben Simmons, and New York gets the three-seed, behind the Nets and the Bucks. Remember, Thibodeau’s teams usually overachieve during the regular season, so this isn’t unfathomable.

Once the playoffs hit, it won’t be possible for the Knicks to get past the Nets or Bucks, so the second round is likely the ceiling there. However, a second-round exit would be tremendous progress after what was essentially a non-competitive series vs. the Hawks in the first round last season.

As stated before, the oddsmakers win projection for the Knicks at 41.5 is too low and close to the floor for this season. The Knicks could run into problems if they simply don’t shoot as well, and aren’t as good on defense. Additionally, Randle was guarded perfectly by the Hawks in the playoff series. What if other teams that have the personnel to do it begin to replicate that, and he regresses a bit? Fortunately for the Knicks, they have enough talent and depth on the roster that they can get away with regression from some players, but it would definitely hurt the potential of the team.

Furthermore, Kemba Walker had a down year last season and dealt with tons of injuries. Even if he’s healthy, are his best days completely behind him? Is Mitchell Robinson going to stay what he’s been for the last three years, or is he going to take that next step that many think is possible? If all these things do go the wrong way for the Knicks, it could be a frustrating and underwhelming year.

I missed Mitchell Robinson so much. pic.twitter.com/bqxDsAm8vm

In the worst-case scenario, the Knicks regress and find themselves not only worse than the Nets, Bucks, Sixers, Hawks, and Heat, but worse than the Pacers, Celtics, and Bulls. The Knicks would get a nine-seed in the Eastern Conference playoffs and be forced to win two games in a row in order to even get into the playoffs before inevitably getting beat by the one-seed Nets or Bucks.

If this were to happen, the Knicks would find themselves in the worst place you want to be in the NBA, and that’s mediocrity. Smartly, the Knicks signed several of the players on their roster to short terms deals, so tons of assets are able to be moved if needed.