Analyzing the Disappointing Guard Class of the 2022 NBA Draft 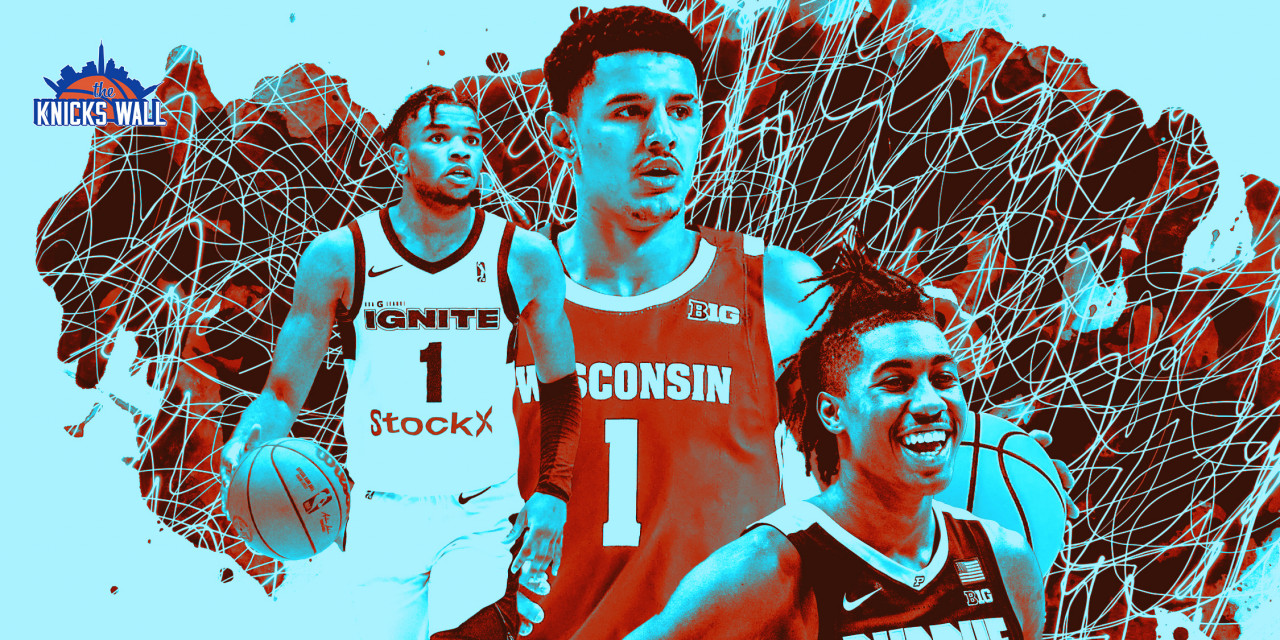 Should the Knicks keep losing, they could be in the perfect place in the 2022 NBA Draft to take guard Jaden Ivey or Johnny Davis. After that, there’s a steep decline in quality.

There are many complaints to be made about the 2022 NBA Draft class, and all are valid. Over the last few months, we have been looking at the big picture trends of the NBA draft and how they are manifesting in this particular class. While this class does not compare to last year’s fantastic draft class, nor does it weigh up to next year’s potentially historic class, it is not without its merits. We have talked about the sophomores that have shot up the draft board as well as the depth of the frontcourt prospects. However, no matter how hard you look for silver linings in the 2022 NBA Draft class, you are going to struggle to find anyone that speaks positively about the guard prospects of this class.

This is consistently discussed as one of the weakest guard classes in modern history, and one of the biggest reasons why is because it is almost completely devoid of lead guard prospects. The NBA is changing all around, and one of those changes is the “point guard” position with the trend of bigger guards and forwards being facilitators and lead guards. It has led to fewer clear-cut, old-school-style point guards. This class puts an absolute spotlight on that idea with a mix of combo guards with clear flaws and a dearth of any prospects that will be trusted to handle the ball in significant roles at the next level.

If you are not concerned with primary facilitation or ball-handling roles, there are some intriguing guard prospects. However, most of those players project to have clear deficits on at least one side of the ball. We should expect to see only a handful of guards in the first round and even fewer in the lottery. We will have one definitive lottery pick guard, and another one or two that can find themselves at the back end of the lottery. Beyond that, it is anyone’s game.

Top of the Class

When looking at the guards of the 2022 class, the conversation starts and ends with Jaden Ivey. The Purdue sophomore tested the waters last year before getting insight from NBA front offices about what he needed to improve upon this year. What he has shown this year is improvements in all of the necessary areas that have led him to take the leap for which draft executives could have only hoped. When players return to college, it is with the intent to improve and make the growth that Ivey has shown and the increase in draft position that accompanies it. Where last year Ivey could have been a mid to late first-round pick, he is now being looked at as a clear-cut, top-four prospect in what is mostly being considered a “four-player draft.” Ivey will still have a lot to show the rest of the year to jump into the top three but his potential makes it realistic.

There are very few prospects in recent years that have the natural athletic ability as Jaden Ivey which alone is enough to bring comparisons to Ja Morant.

The next guard that is in the conversation has a few similarities to the Purdue guard and that—plus their individual matchups—has brought loads of comparisons between the two. If Ivey was the perfect example of going back to school to jump up boards, Wisconsin’s Johnny Davis is the absolute anomaly. Davis is another Big Ten guard that has skyrocketed up boards, but instead of doing it conventionally based on last year, he came out of nowhere. You would not have found a top 10 with Johnny Davis on it, and you may not even have found a top 100. He was not on the radar of the NBA draft in any capacity, but this year he has flourished and been one of the best stories in college basketball.

Johnny Davis is always going to be compared to Ivey and at some point was being touted above him by certain draft scouts and especially Draft Twitter, but his game could not be more different. While Ivey is a freak of nature athlete that is explosive enough to make plays out of nowhere, Davis is an average athlete whose skill makes him one of the most productive players in the game. The Boilermaker’s natural athleticism makes him an ideal NBA defender even if he still needs to improve on certain areas such as fighting through pick and rolls. The Wisconsin sophomore will have questions about defense because of his lack of length and athleticism, but his effort will make him a competent defender.

I'm in Madison tonight for one of the best prospect matchups of the season, Johnny Davis + Wisconsin vs Jaden Ivey + Purdue. Two potential top-5 picks going head to head. Davis finished with 37 PTS and the win when these teams met on January 3rd. Big opportunity for Ivey tonight. pic.twitter.com/7Qe6dG5n4g

The difference between those two players could not be more clear. If you are looking at college production, Davis is your guy, but if you are looking at the projection to the next level, Ivey is for you. Ivey is skilled along with possessing athleticism, but playing in a dual big-based Purdue offense does not allow him to show everything of which he would be capable. The more spaced, fast-paced game of the NBA is far better suited on paper to that type of explosion. Davis will struggle because of that aforementioned lack of length and athleticism, but his skill translates to being a role player.

Averaging over 20 points a game, Davis has anchored a decently talented Wisconsin team to a top-10 ranking, where they won the Big Ten including two wins over the Boilermakers and Ivey. That production alone is enough to keep him from being overlooked, even if he does not have the star potential that Ivey does, he does look to be a productive NBA player.

Depending on what you are looking for, you can make a case for a guard in this class, especially if what you are looking for is scoring. There are players from alternative pathways that have been considered top-five picks before this year, such as the G League Ignite’s Jaden Hardy, who has loads of potential if you eliminate his poor decision-making and terrible shot selection. The individual highlights are going to look appealing even if the numbers don’t, and maybe that is enough for a team that thinks they can help fix some of those issues. Similarly, Jean Montero from Overtime Elite is a smooth-creating combo guard with a very strange development trajectory as the guinea pig for a new pathway. Will teams talk themselves into the upside despite the poor shooting numbers and being a potential defensive liability?

17 points, 17 assists, 2 turnovers for projected lottery pick TyTy Washington. Broke John Wall's single-game record for assists by a Kentucky player, and the most-ever for a freshman in SEC-play, per @JaredBerson. pic.twitter.com/QzINnDAHCz

Kentucky’s star freshman TyTy Washington is arguably the best passer of the class but has not been given primary point-guard responsibilities under John Calipari. Washington is certainly not the last player to have an issue with what their role is at Kentucky as a combo guard and when you look at the track record of Tyler Herro, Jamal Murray, and Devin Booker among others, there is enough to believe in. The Kentucky freshman may very well be the third guard off the board and his hot shooting earlier in the year was a big part of why. He had a great stretch that included him shooting 43% from three, which has not been sustainable as he is now just 34% from beyond the arc. Is that enough to convince teams to take a chance on him when you include his passing ability even if he is not the most efficient player on the court?

The Rest of the Group

Those are the players that project as first-round picks; after that, it is a complete toss-up. Last year we saw players that highlighted point-of-attack defense such as the Knicks’ own Miles “Deuce” McBride and Baylor’s backcourt of Davion Mitchell and Jared Butler, as well as playmakers like Sharife Cooper. This year’s class is severely lacking on those skill sets in particular but does have some guards with any combination of good size and athleticism for combo guards. “Combo guard” is the term you will hear the most this year come draft night and a lot of those players have one or two things that make them appealing.

Will an undersized guard with limited college production such as Kennedy Chandler from Tennessee have enough talent at getting into the paint and penetrating defenses to interest an NBA team? The combine will tell us a lot with players like Chandler and, as always, the NCAA tournament presents an opportunity for prospects to show themselves against the best in college basketball.

Kennedy Chandler nasty hesi to get open in the lane and hits the clutch floater for Tennessee! pic.twitter.com/1OrFo9zb1a

Without something dramatic changing between now and draft night, this is something that is already being considered a historically bad guard draft class. Is that hyperbolic? Maybe, but there are not a lot of players on paper that are ready to be in the NBA and that will make for a very interesting pre-draft season.