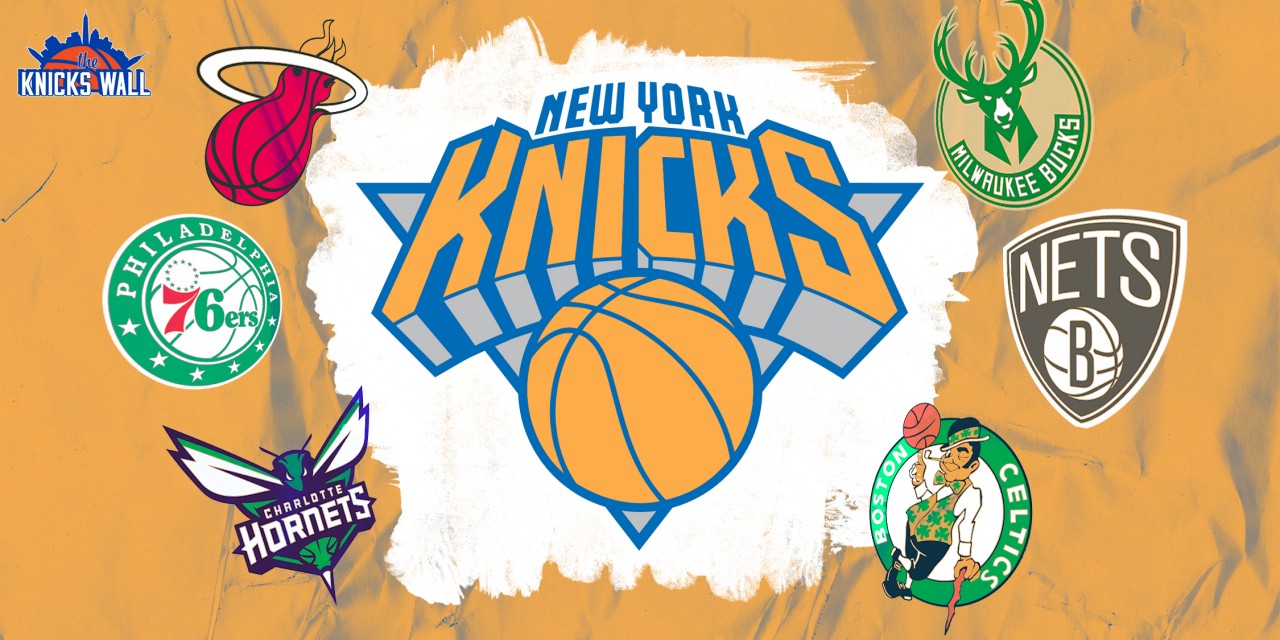 The Knicks have surprised the NBA and leaped into the Eastern Conference playoff discussion. Which teams would be the toughest to face?

If someone told you that four months after the start of the season there would be articles written about New York Knicks playoff scenarios, you would have laughed. In The Knicks Wall season preview roundtable, I had the Knicks winning 18 games this season. Fast forward to 48 games in, 66.7% of the way through, and New York is 24-24, currently sitting at sixth in the Eastern Conference standings.

Given the fact that the Knicks are six games ahead of the 11-seed Toronto Raptors, they will almost certainly at least be in the play-in tournament, barring an incredible late-season collapse. Given the 72-game shortened season, the NBA decided to once again implement a play-in tournament to see who gets the seventh and eighth seeds in each conference. With that in mind, it’s important for the Knicks to remain at a sixth seed or above, so they are guaranteed a best-of-seven playoff series. 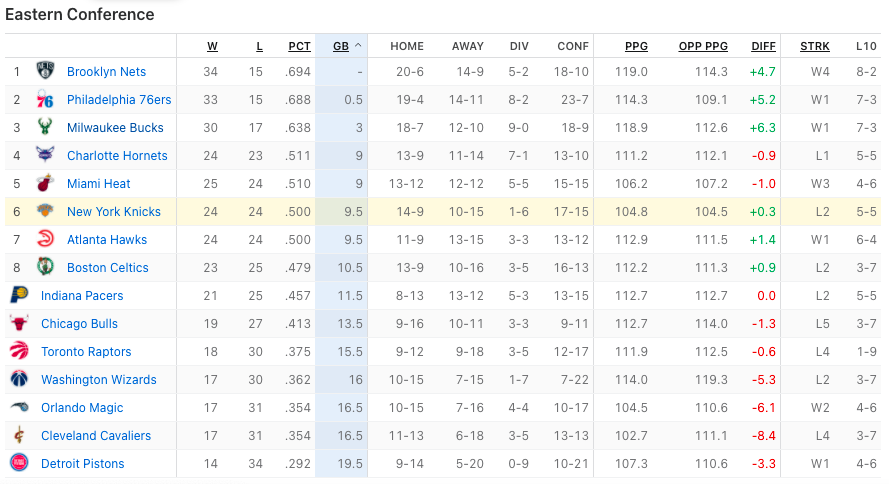 The Knicks are in a virtual tie with the Atlanta Hawks, who are in seventh, and a half-game back of the Hornets, who are in the fourth seed. There isn’t a huge margin for error, which is Wednesday’s loss against the Minnesota Timberwolves, the NBA’s worst team by record, was so detrimental.

The fourth seed is likely the highest the Knicks could go, as the differential between them and the Bucks in the third seed is 6.5 games. The Bucks, as well as the Sixers and Nets, are all but locked into the top-three seeds in the Eastern Conference.

Let’s assume that the Knicks either get a seed in the four to six range, or get through the play-in tournament to finish seventh or eighth. It’s time to break down potential first-round playoff matchups for the Knicks from easiest to hardest.

The Atlanta Hawks are one of the most difficult teams to read in the NBA right now. They were 14-20 when head coach Lloyd Pierce was fired, and as soon as Nate McMillan took over, they went on an eight-game winning steak to move to 22-20. A major difference during this winning streak was the improvement on defense, as they held four opponents to 94 points or fewer during this span.

Since that eight-game winning streak, opponents seemed to have figured out Nate McMillan, and Atlanta has lost four of their last six games. However, the Hawks are still just a half-game back from fourth in the Eastern Conference and 0.5 games back from fifth. As a result, it’s possible that the Knicks and Hawks can play in a matchup between the four and five seeds in the first round.

The Knicks are currently 2-0 against the Hawks this season. They beat them on January 4th, 113-108, and then again on February 15th, 123-112. If the Knicks were to go against the Hawks during the playoffs, it’s a very good matchup for them. The Hawks are lacking on defense, ranking 23rd in the NBA in defensive efficiency, whereas the Knicks rank fourth.

These are two very slow-paced teams as well—the Hawks ranking 23rd, and the Knicks ranking 30th. In the playoffs, the game slows down further, and defense matters a lot more, and the Knicks have a major edge there. It’s also easy to see how Trae Young, the Hawks’ leading scorer at 25.4 points per game, would struggle in a playoff game as the physicality increases.

The Charlotte Hornets should be viewed by the Knicks similarly to Atlanta in terms of matchup difficulty, if not a little bit tougher. It all depends on whether LaMelo Ball is healthy or not—he’ll be out for at least the next four weeks with a fractured wrist. Despite reports that he could be out for the season, it’s possible he could be healthy for the playoffs, which will be about eight weeks after his injury.

The Hornets are stacked with guards, which could make them a threat for the Knicks. Between Ball, Terry Rozier, Devonte’ Graham, and Malik Monk, Charlotte has a ton of scoring options to do, especially with Gordon Hayward on the wing. As a result, Charlotte ranks sixth in the NBA in three-point percentage at 38.3%. If there’s a team that can defend that, it is the Knicks, who rank first in the NBA in opponent three-point percentage at 33.6%.

The Knicks lost their one game against the Hornets on January 11th, 109-88, when Julius Randle and R.J. Barrett shot a combined 7-of-27. That extremely poor shooting from both players on the same night is something that likely won’t happen again.

Additionally, the Knicks are a different team now than they were earlier in the season, and it’s hard to see how a frontcourt of P.J. Washington, Bismack Biyombo, and Cody Zeller could contain Julius Randle.

The Boston Celtics have been one of the NBA’s most disappointing teams this season. Despite having two All-Stars in Jayson Tatum and Jaylen Brown, the Celtics are 23-25, and currently in the no. 8 seed in the Eastern Conference.

Despite the Celtics’ struggles, this is a team that will likely be better in the playoffs than the regular season due to the talent on the roster. With Tatum and Brown surrounded by Kemba Walker and Marcus Smart, this team is better than their record. The Celtics were in the Eastern Conference Finals last season, and could certainly get hot once the game slows down in a playoff setting.

The Celtics rank 21st in defensive efficiency, which will almost certainly improve come playoff time. The Knicks did beat the Celtics by 30, 105-75 on January 17th, and will get another chance at them next week on Wednesday, April 7th. Overall, this is still a better matchup than several other opponents, but the Celtics shouldn’t be slept on and will be tough to beat in a best-of-seven series

The Celtics may be the most disappointing team of the regular season, but the Miami Heat aren’t too far behind. The Heat, who are coming off an NBA Finals appearance in the bubble, have a slightly better record than the Knicks at 25-24, good for fifth in the Eastern Conference. That being said, this team should be feared almost as much as the Philadelphia 76ers going into the playoffs, especially for New York.

The Knicks and the Heat have played three times this season, and Miami has won every game. The Heat play a similar style of basketball to the Knicks but are more talented pretty much everywhere on the court. They rank sixth in the NBA in defensive efficiency, 29th in pace, and have two stars in Jimmy Butler and Bam Adebayo, who average 21.4 points and 19.3 points, respectively. Miami is also coached by arguably the best coach in the NBA, Erik Spoelstra.

Miami made a plethora of moves at the trade deadline to put themselves in a significantly better position to compete, highlighted by trading Kelly Olynyk and Avery Bradley for Victor Oladipo. Oladipo is averaging 20.8 points per game this season and gives the Heat another creator who has the potential to play at an All-Star level if healthy. They also acquired Nemanja Bjelica from Sacramento. Bjelica is a solid role player who provides depth in the frontcourt.

If Miami gets the four seed, it would make the Knicks’ easiest potential path to the second round a lot harder.

The Sixers have received a lot of criticism for their poor performances in the playoffs in recent seasons. At 32-15, this year’s team is one of the best, currently second in the Eastern Conference Standings.

The major differences in Philadelphia this year have been the MVP-level play from Joel Embiid, the improvement of Tobias Harris, the addition of three-point shooting, and the hiring of Doc Rivers. Embiid is averaging a career-high 29.9 points and 11.5 rebounds on the season while shooting 52.5% from the field and 42.2% from beyond the arc. Harris is averaging a career-high 20.7 points, shooting 51.7% from the field, 40.4% from deep, and 89.7% from the free throw line. Seth Curry and Danny Green are shooting 42.4% and 40.6% from deep, respectively.

It’ll be interesting to see if Ben Simmons can improve his postseason play this time around. Simmons has suffered in past playoffs due to a lacking jump shot when the game slows down. If he can improve his play, then the Sixers can potentially make it a close series with the Nets in the Eastern Conference Finals.

The Bucks are my second-hardest ranked matchup for the Knicks in the playoffs, despite the fact that New York is 2-1 against them this season. The Knicks have seen success against Milwaukee, but the last win against them came with most of the Bucks roster hurt, so it’s not an accurate reading on results when both teams are fully healthy.

The Bucks are a tougher matchup than the Sixers because of Giannis Antetokounmpo. Averaging 28.3 points, 11.4 rebounds, and 6.3 assists, Antetokounmpo is probably the most unstoppable force in the NBA. He’s surrounded by Khris Middleton and Jrue Holiday as well, two phenomenal two-way players.

This is a series I could see the Knicks losing in four or five games, as it would be extremely tough to stop this team, who rank sixth in offensive efficiency, eighth in defensive efficiency, and third in three-point shooting at 39.4%

The Brooklyn Nets are the best team in the NBA, and it isn’t even close. With Kevin Durant, James Harden, and Kyrie Irving, there’s no stopping them. Even without Durant, there’s still no stopping them, as shown in recent regular-season games. All three stars are averaging 25 points per game, and assuming all three are healthy, I expect this team to roll through the playoffs and eventually be crowned NBA champions.

The Knicks haven’t beat Brooklyn in two attempts this season, and it would be shocking to see them get more than a game against the Nets in a seven-game series. While this would undoubtedly be the toughest matchup for the Knicks, it would also be the most fun. Preferably for the Knicks, this matchup would occur in the second round.

A series against the Brooklyn Nets would kickstart the beginning of a rivalry for years to come. Additionally, it would be exciting to see this young, developing Knicks team fight every single possession against arguably one of the greatest teams ever assembled.

The Nets rank first in the NBA in offensive efficiency and fourth in three-point percentage, so while their offense is nearly unstoppable, the Knicks’ defense would present a bit of a challenge for them. Currently, the one area where the Nets are vulnerable is defense, as they rank 25th in the NBA in Defensive Rating. However, as we’ve seen historically with super teams, this defense will lock in once the playoffs begin.

The Brooklyn Nets will be the toughest matchup for any team in the playoffs, but it’s one that Knicks fans secretly want to see.