Are Dennis Smith Jr. and RJ Barrett Compatible Together? 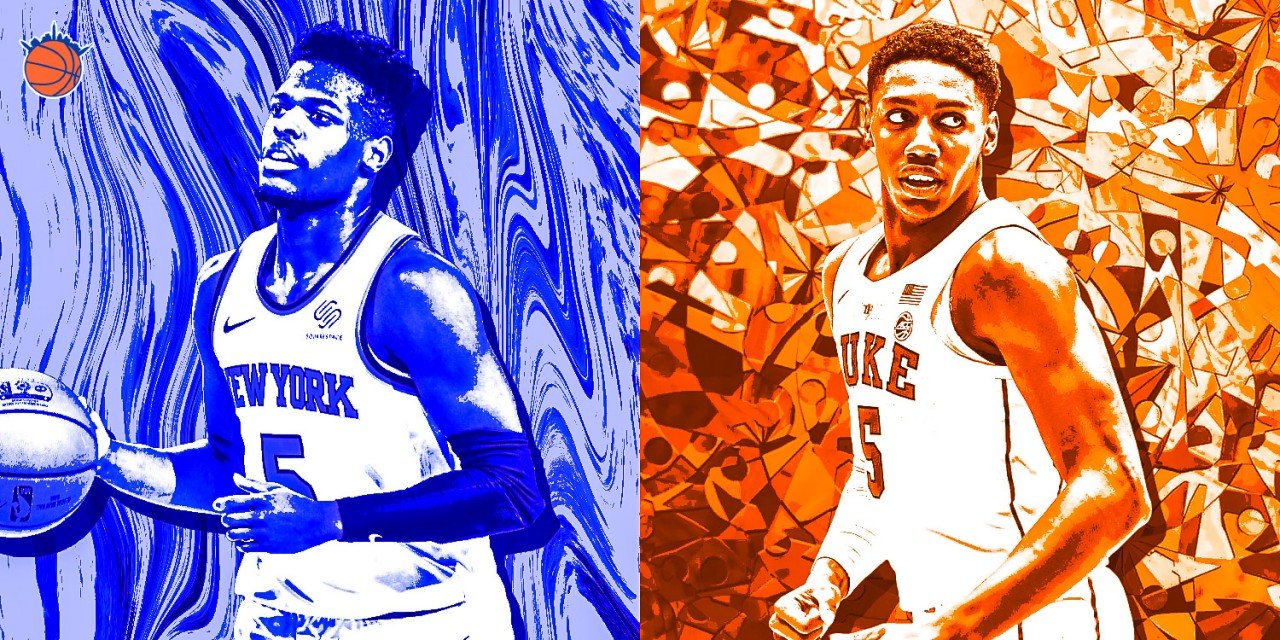 Dennis Smith Jr. had a tough time adapting to a ball-dominant wing in Dallas, but there’s no reason to suspect it can’t work with Knicks rookie RJ Barrett in the backcourt.

Since they won 54 games in the 2012–13 season, the Knicks have gone 163-329. Last season—their second 17-win season during that same six-year stretch—netted the team the highest pick they’ve had since Patrick Ewing. The player to previously hold that distinction, Kristaps Porzingis, was turned into a pair of first-round picks, salary relief, and an interesting potential backcourt mate for Barrett in Dennis Smith Jr.

There’s a certain irony to the Knicks acquiring Smith Jr. The point guard was linked to the Knicks throughout the lead-up to the 2017’s draft, but thanks to Phil Jackson and an octopus, the team took French prospect Frank Ntillikina. While already a good defender, the 20-year-old Ntillikina’s offensive struggles caused many—including LeBron James—to scold New York for passing on Smith Jr.

But a funny thing happened last season. Smith’s Mavericks traded up to draft Slovenian prodigy Luka Dončić and DSJ went from an explosive, high-upside point guard prospect to a perceived obstacle to Dončić’s ascension, stealing possessions away from the eventual rookie of the year.

While the acquisition of Elfrid Payton may muddy the starting point guard waters, the 21-year-old is under team control for another two years. The Knicks should give Smith every opportunity to prove himself to be a potential franchise piece going forward. How would R.J. and DSJ work together?

The clearest impediment to this tandem is the reason Smith was traded out of Dallas. As a ball-dominant point guard, it was a lot for him to have to adapt to playing with someone who is better equipped to run the offense. Particularly after he was essentially given the keys to the offense as a rookie just a year prior.

In his first year in the NBA, Smith Jr. had a usage rate of 28.9%. That dropped down to 24.8% during his time with Dallas once Dončić arrived, and bounced back up to 27% in New York.

Like Smith Jr., Barrett is at his best with the ball in his hands. After a disappointing start during Summer League, the rookie showed the full breadth of his game against the Washington Wizards on July 13, posting 21 points, eight rebounds, and 10 assists on 7-of-13 from the field.

While his size indicates that he’ll play the 2 or sometimes the 3 position, there’s a good chance that Barrett may be the best passer on the floor for the Knicks. This skill was overlooked by many during the draft process, mostly because Barrett has shown a propensity to fall victim to tunnel vision. However, he’s often at his best when he’s looking to create for teammates.

In this way, playing with another aggressive scorer may bring out the best in Barrett. He and Smith will have to coexist, something that Smith’s longtime trainer, Shawn Farmer believes won’t be an issue. “[Smith Jr.] can play with anybody,” he told Ian Begley of SNY. “We can go down to the elderly home and he can play with them. I’ve seen this kid since 6th grade, with players that are talented, not as talented, and I’ve seen him make them better. He wouldn’t have an issue playing with anybody.”

In the 21 games he played with the Knicks last season, Smith Jr. had the highest assist percentage of his career, 32.2%. This is up from 29.5% his rookie season, and 24.1% last season before coming to New York.

The key to the two young guards succeeding together will likely come down to their ability to shoot from deep. Barrett’s stock fell last season at Duke in large part due to the Blue Devils’ lack of spacing. Defenses could collapse on him as he drove without fear of him kicking the ball out to a reliable shooter.

While this likely led to the formation of a few bad habits, it also means that Barrett has experience running an offense. By his fourth Summer League game, R.J. was hitting open shooters much more frequently than his first two games. It’s like he realized his teammates could make these shots, unlike those he had in college.

Before coming to the Knicks, Smith had raised his three-point percentage from 31.3% to 34.4% before the trade. While that fell to 28.9% with New York, Farmer also told Begley that shooting has been a major focus this offseason. “He’s focused on shooting and conditioning, 1000 percent,” he said.

“He’s realized that there are some things in his mechanics that have to change… From what I’m hearing, he’s going to work with a couple of the Knicks assistant coaches. And he’s going to do some stuff on his own, which is to be determined. But his main focus is mechanics.” [SNY]

Offensively, it will likely take some time for these two young guards to adapt to the other’s game—especially since they’ll be mostly be surrounded by other young prospects—but there’s no reason to think that they’re fundamentally incompatible.

However, coach David Fizdale will have his hands full trying to build a respectable defense with Barrett and Smith. At 6’3” with an equal wingspan, Smith’s small frame limits his defensive potential, while Barrett is 6’7” with a 6’10” wingspan.

While Smith’s measurables are lacking, he has been working out with Chris Paul, who made up for his size with defensive tenacity. Conversely, Barrett’s lack of lateral explosiveness will likely prevent him from reaching the defensive ceiling that his frame provides.

Although neither player should expect to make an all-defensive team, they could strive to be serviceable; that should take some time for the 21-year-old Smith and the 19-year-old Barrett. Luckily they’ll have Mitchell Robinson back by the rim to clean up their messes in the meantime.