Are the Knicks Properly Adapting to the NBA’s Analytics Era? 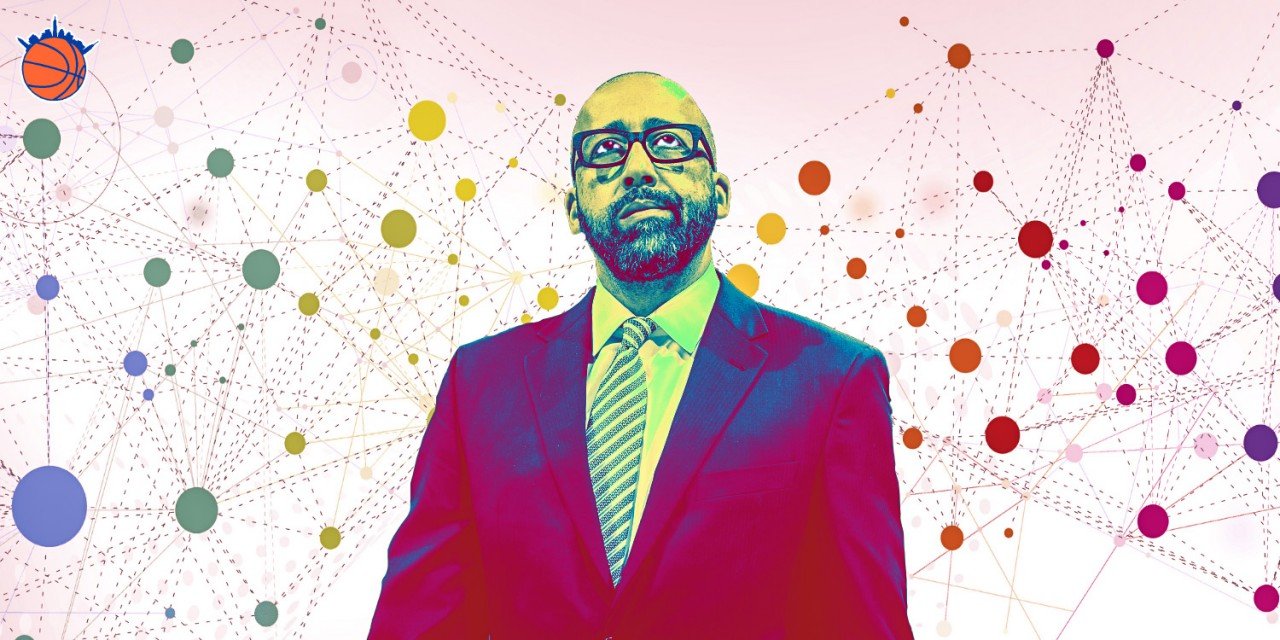 After exploring the lack of identity of David Fizdale’s squad, we look at the question of analytics: what are they and whether the Knicks are wisely implementing the strategy or not.

The use of analytics has become a polarizing topic of discussion in basketball media.

It can defined as using available resources—whether it be numbers, film, or something else—to make decisions that lead to a competitive advantage. Charles Barkley and Jeff Van Gundy are at the forefront of those who discredit the benefits of data analysis, calling it a needless way to put “nerds” in charge of NBA teams, supplanting former players and coaches alike.

While statisticians and data scientists such as Daryl Morey, Houston’s recently extended GM, have claimed positions at the top of NBA front offices, it’s hard to claim they are usurping roles designated for those with player experience or coaching at the highest level.

The NBA’s most productive teams in recent years have heavily depended on the use of analytics. From the growth of the Warriors’ dynasty, to the heightening and extension of LeBron James’ prime in Miami and Cleveland, to the Bucks and Rockets becoming forces by copying these models to a further extent, it’s evident that all successful teams in the association rely on rational and scientific decision making to affirm beliefs founded by their coaching staffs.

It’s no coincidence the Warriors and Cavs have boasted a top-five Offensive Rating from 2014–18, the Bucks lead the league in efficiency this season, and the Rockets have maintained a top-two ORtg in each of the past two seasons.

The Knicks are nowhere near this level of success, unless their metrics of success are measured in losses and lottery positioning as opposed to wins and playoff appearances. Still, the lower-ranking teams currently showing the most promising rebuilds also have deep imprints of analytics on their success. The Hawks, Nets, and Kings have best shown the fruits of their statistical labor, developing a clear identity with young players and progressive coaching staffs.

This trio of teams presents an ideal model for the Knicks to follow in their simultaneous implosion-by-design and search for superstars. They are great examples of franchises selling hope and success without one of the league’s best of the best on their roster.

Let’s take a deeper dive into what defines stronger analytics teams in the NBA, and where the Knicks are in relation to their peers.

NBA analytics departments look deeper than shouting numbers into the abyss without context or explanation behind the meaning of statistics. A large part of these staffs’ responsibility is examining numbers readily available to the team—obtained by free sourcing or internally—and looking for success both on the team as currently constructed and in the future.

The NBA’s most adept analytics departments have broken down into two general philosophies, typically based on the team’s current standing in the league, and the presence of bona fide superstars. Since the NBA is driven by the success of individual players, the league’s most savvy statisticians have worked to effectively lean into the strengths of their most important players; teams devoid of such singular star talents have looked to exploit more general trends.

For instance, the Rockets and Cavs (during LeBron’s return to Cleveland) maximized the value of their ball-dominant stars by supplying them with spot-up shooters to keep the ball in their best players’ hands as much as possible. This helped make James Harden and LeBron (with the occasional help of Chris Paul and Kyrie Irving) statistical deities on teams with the league’s most prolific offenses.

In contrast, we see what happens when LeBron isn’t surrounded by an abundance of low-maintenance players in Los Angeles. While James might be with a more well-rounded group of players on the Lakers, team president Magic Johnson’s inability to evaluate the roots of the Cavs’ success in recent years is largely why the Lakers will likely watch the playoffs from home.

The scoring ability of LeBron’s supporting cast in L.A. is predicated on having the ball for extended touches, while James’ biggest strength lies in dominating possession of the ball and picking apart defenses. The exchange of James’ possession time for more talented teammates has proven to be futile.

Alternatively, the Warriors and Bucks have added players to fortify their star players. Golden State has prioritized adding crafty passing bigs and versatile defenders to flank Stephen Curry and Klay Thompson, two players who can create offense both on or off the ball. Using play-by-play data to determine an attainable goal of 300 passes per game, head coach Steve Kerr used data science to correlate on-court objectives with wins.

This goal was more easily achieved by using lineup numbers to deploy Draymond Green at power forward. Analytics helped Green transition from a tweener to a four with an irreplaceable skill set.

Similarly, Mike Budenholzer and Milwaukee worked to add shooting throughout its roster to space the floor for Giannis Antetokounmpo, based on the success he had in limited time playing with more modern lineups under a more old school coach in Jason Kidd. We are now seeing the impact of Giannis with room to attack the rim on offense, and it is terrifying.

The Hawks and Nets follow a similar model to Milwaukee to support their young, electric playmakers in Trae Young and D’Angelo Russell—aiming to push the pace and jack up more efficient shots, whether they come from three or at the rim. The Kings use a similar approach with De’Aaron Fox, but do not attempt threes at the same rate. Instead, they likely use shot chart and spatial analysis data to determine which shots are most readily available from their players’ favorite spots on the court.

With so many approaches to developing a successful team in the league while relying on analytics, there is room for differing philosophies in an analytically driven front office.

There is no limitation to what can be accomplished with data analysis, as each team has its own unique set of strengths and weaknesses. Analytic versatility bridges the gap between pigeonholed coaching methodology and the stringencies of linear regression models and statistical analysis.

The Knicks’ use of analytics, past and present

With several varying examples of analytics staffs developing winning basketball teams, let’s take a look at the Knicks’ front office and whether it is implementing data analysis into its decision making.

Starting at the top, Knicks general manager Scott Perry has a brief background in the use of analytics, which is relatively strong compared to the rest of his staff. Perry has particularly used analytics as a factor in his decision making on draft night. He played an integral part in the selections of Fox and Victor Oladipo, looking to find a star to build around.

“Analytics is a very important part to our overall scouting process and part of my philosophy,” Perry said in a video on MSG Networks’ website. “I like to refer to it as a tool in the toolbox.”

Perry’s not-so-subtle tank job this season and affinity with the free agency prospects of Kevin Durant and Kyrie Irving only further affirm his desire to find the all-important first step of the model to build a top-tier team. Whether he acquires any of these potential stars remains to be seen, but Perry’s valuation of analytics will show rather quickly should he acquire these gifted talents in the way he constructs a roster around them.

President Steve Mills and assistant general manager Gerald Madkins downplay the importance of analytical decision making in the same video, and that should concerning to any fan of the Knicks. Furthermore, beyond David Fizdale encouraging Marc Gasol to take more threes, the Knicks’ coaching staff has shown little experience in adapting to analytical trends.

Fizdale’s assistants have no known associations with analytics. The only discernible connection to data science on the team is director of technology Richard Dry, who is credentialed in machine learning, a scientific method that develops self-learning computers, and director of analytics Mike Smith, who majored in management information systems in college. This is a barren amount of analytically driven employees in an age that is largely dependent on analytics in order to succeed.

As previously highlighted at The Knicks Wall, New York simultaneously hunts inefficient shots on offense, allows easy looks in the wrong spots on defense, and has yet to develop a tangible identity this season.

This raises the question: are the Knicks implementing analytics in regard to either this season or their plan for the future? The answer is dependent on timeframe, with New York putting a greater priority on analytics in its macro approach while continuing to make counterintuitive decisions in the micro.

In the bigger picture, New York’s grasp of the importance of pick valuation and the salary cap has given the Knicks potential for an astronomical leap this summer. Perry appears to understand the importance of having as good of a mathematical chance at a superstar in the draft, as well as the value in retaining and making the most of each pick, regardless of position (see: Mitchell Robinson). In terms of drafting, Perry helped construct today’s Kings roster, which is brightly shaped for the future. He has highly valued versatility and upside in his draft selections historically, so Perry has aimed on simply hitting on one gem in the draft to vault the Knicks to the next level.

Equally as important, New York has shown a strong understanding of the salary cap, building space for two max contracts this summer while maintaining flexibility moving forward. While this was the plan for an analytically influenced front office like the Process Sixers, it remains to be seen what happens if the Knicks fall to the fifth pick and strike out on the biggest names in free agency.

Will they maintain this flexibility and continue to pursue the top pick of the draft, or will they look to build a roster with middling upside?

There is little evidence on the current Knicks roster of analytical influence apart from maximizing two-for-one opportunities—shooting while being mindful of time to give your team another possession at the end of quarters. Per Cleaning the Glass, New York is relatively high in two-for-ones attempted. Combined with baffling lineup combinations of players who have poor numbers together (pairing Dennis Smith Jr. with Emmanuel Mudiay), it’s hard to locate any evidence-based reasoning behind Fizdale and his staff’s decision making in terms of offensive identity and lineup combinations.

At the end of the day, analytics is about finding a competitive advantage through the use of all available information and rational thought. Teams with a strong analytical presence in their coaching tend to display their analytics staff’s influence on the court. This can be seen in many different ways: the awareness of a two-for-one opportunity, the location of shots taken, or the limitation of post-ups with the intention to score.

All these adjustments and more are done with the simple goal of winning games. As soon as the Knicks grasp that beyond maximizing their chances at a star in the draft or free agency, they will have an easier time building a sustainably successful roster.

The Knicks can speak in general terms about landing a star or two via free agency and the draft, but their ability to make data-driven decisions will determine the window and upside of any potential super-team. Without the presence of strong analysts, New York’s future will either be that of a star-led team in lieu of a high ceiling, or of playing like a star-led team without a star.

»READ: Breaking down Fizdale’s offensive system and impact on future

»READ: Searching for identity in the big city