ATL to NYC? Examining Mike Budenholzer’s Stint with the Hawks 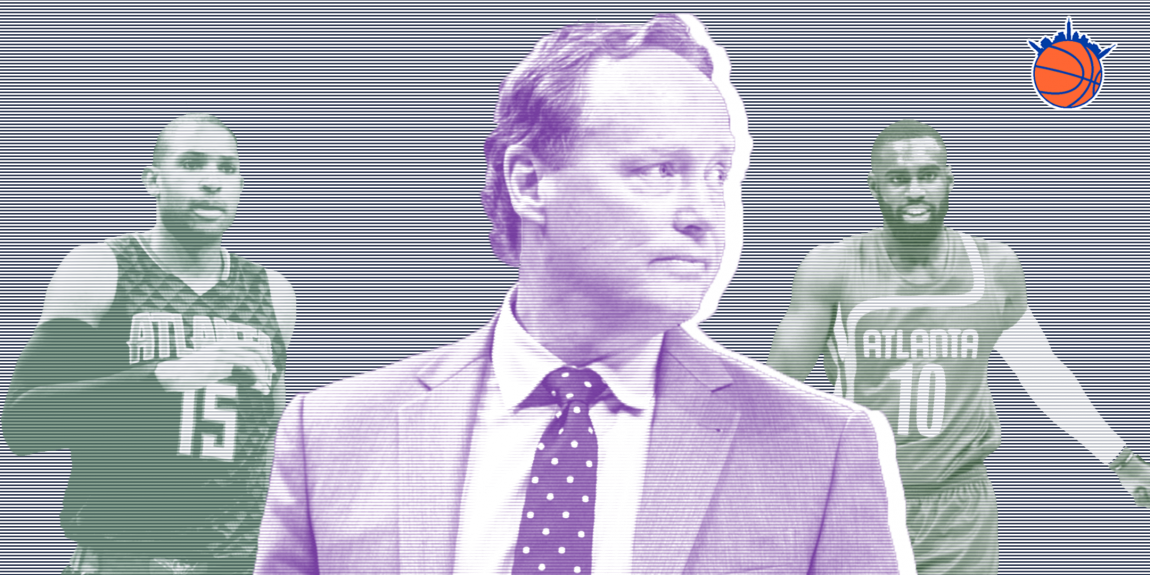 What can we learn from Budenholzer’s tenure in Atlanta that he could bring to New York?

The search for a head coach in New York has been a relatively slow burn. With initial reports tying the team to the likes of Mark Jackson and Kenny Smith, fans were put in the unenviable position of rooting against certain candidates rather than truly championing others. Sure, David Fizdale and Jerry Stackhouse are somewhat exciting options, but even they aren’t iron-clad, home run hires. Despite the encouraging comments of Scott Perry and Steve Mills during their exit press conference, there was a swirling feeling that the Knicks would somehow mess this up.

And they still might. But on Wednesday night, a new contestant officially entered the ring. Mike Budenholzer and the Atlanta Hawks mutually agreed to parts ways, ending a successful five-year tenure for the Popovich disciple. Citing the direction of the franchise as they careen toward a full-on rebuild, Budenholzer and Hawks brass decided it was best for all parties involved to move on. He had been linked to the Knicks even before last night, with some reports indicating that New York is his “number one choice.” Odds are this won’t come to fruition quickly, considering that coaching Giannis Antetokounmpo with the Bucks remains an enticing option for any and all candidates.

Budenholzer’s insistence on winning may not line up directly with New York’s outlook this coming season, but Bud surely understands that. It would be a long term play. The Knicks will be bad next year, but the year after that, once Kristaps Porzingis makes his full return from the ACL injury, the outlook for this franchise could suddenly perk up should they lock down a coach of Bud’s caliber.

The defensive units Bud threw out were impressive during his five years in Atlanta. Even this season, a year that saw more Dennis Schröder than anyone but Schroder himself would like to have seen, the Hawks finished 21st in the league in Defensive Rating. Their 14th-place finish during Budenholzer’s first year in 2013–14 was the lowest that they ended up other than this season, clocking in the top six for the other three years. Even after Al Horford left for Boston, the Hawks finished fourth in defensive efficiency in 2016–17 with Paul Millsap and Dwight Howard manning the frontcourt. Leading a team that can put out a one-off solid defensive season is not overly difficult; establishing a system that sets the baseline at average and leaves room for growth is an impressive coaching feat.

Budenholzer seemed to coax incredible defensive performances out of everyone on his roster, setting up countless bit players for larger roles. DeMarre Carroll and Kent Bazemore secured huge paydays because of their emergence as 3-and-D stalwarts. Millsap took his game to the next level in Atlanta, notching four consecutive All-Star appearances while earning his keep as one of the elite two-way power forwards in the game. The innate ability as a coach to inspire a team to play defense isn’t easily obtained—just ask the Knicks.

You remember how Budenholzer’s Hawks finished in the top six in defensive efficiency three years in a row? Remember that little factoid? Glad you do!

The Knicks haven’t finished in the top six in defensive efficiency in even two consecutive seasons since 1999–00. They had a brief resurgence in 2011–12 thanks to Tyson Chandler’s DPOY-caliber  presence in the paint, but other than that, this has been a bad defensive team for nearly 20 years. Twenty! It’s high time that they make defense a priority, especially considering that they have one of the best rim protectors in the game when healthy in Porzingis. Even acknowledging Stackhouse’s success as the best defensive coach in the G League, Budenholzer is far and away the best choice if the Knicks are serious about building a defensive culture. Envision a healthy KP being maximized by his coaching staff, roaming the paint and swatting everything in his path while the perimeter defenders perfectly funnel the action into his office.

Under Jeff Hornacek, the Knicks had one of the more disgusting shot profiles in the entire league. They attempted the second-lowest frequency of three-point shots while puking up a ton of midrange jumpers, leaving their offense to dwell in the basement while other teams progressed into the new era of basketball. While shooting threes doesn’t necessarily equate to wins, we have mounds of evidence to back up that shooting a copious amount of midrange shots is a recipe for disaster. Teams like the Spurs and Grizzlies have thrived while harboring such a strategy, but they had elite talents like Tim Duncan, LaMarcus Aldridge, and Zach Randolph that were relied upon heavily for their expertise in that area of the floor. Allowing the ball to move freely and setting up action for your top-tier shooters is the way to go, which is exactly what Atlanta has done for the last several years.

Budenholzer’s Hawks have had much more palatable shot profiles than the Knicks. They finished no higher than 20th in midrange shots during his tenure, pairing that with one of the more potent three-point attacks in the NBA. Some of those choices have to do with his personnel, as Kyle Korver, Kent Bazemore, and Jeff Teague soaked up plenty of looks from deep, but there’s no reason to think that the Knicks couldn’t emulate this type of offense. Jeff Hornacek was unable to get the most out of his three-point shooters, often leaving Courtney Lee and Porzingis to chuck up midrange jumpers fighting through screens. The Knicks have the ability to be a decent three-point shooting team; they just need to have a coach that has the right vision.

I’d love to see New York finish in the middle of the pack in three-point frequency this season, balancing the strong midrange game of Trey Burke with the volume from Tim Hardaway Jr. coming from three. Speaking of THJ, him and Budenholzer are old pals, and bringing Bud on could elevate his game to the next level.

Tim Hardaway Jr. found himself in Atlanta. His success in the 2016–17 campaign led to his much maligned $72 million contract with the Knicks, and whether you’re a fan of THJ’s or not, his improvements under Bud were undeniable. Also, he’s here to stay, so the Knicks might as well do the best the can to emphasize the greatest parts of his game.

After the Knicks dealt Hardaway following the 2014–15 season, he was stuck in Atlanta without much direction. He was shipped from the NBA to the (then) D League at one point, with the Hawks prioritizing his development and giving him a chance to get serious burn in other venues. He played just 51 games that season in the NBA, failing to latch on to a serious role with a veteran Atlanta squad.

The 2016–17 season was a completely different story. Hardaway shot over 45 percent for the first time in his career, recording a career high in every major statistical category. The swingman has sung the praises of Budenholzer on more than one occasion, perhaps most notably this season prior to a showdown between the two ex-colleagues:

THJ on Budenholzer from Knicks-Hawks earlier this year:

"I'm just happy that he instilled that dog and that fight inside of me…" pic.twitter.com/9O5tKUrEcP

Bud deserves a ton of credit for reinvigorating THJ and giving him the leeway to propel himself to new heights. Should they reunite, you’d have to think that would put more pep in Hardaway’s step, especially considering that he’ll be the clear-cut number-one option until Porzingis returns. Despite his inconsistent play, he was an explosive scorer and decent pick-and-roll player at times for this Knicks team. A new head coach that essentially spun Hardaway from straw to silver—not quite gold—would be the perfect person to have the ear of New York’s de facto best player next season in the absence of Porzingis.

The coaching carousel that has been spinning relentlessly in New York for years needs to stop. Shut the music down, close the ride off, and hand the keys over to a reliable, experienced owner. Budenholzer comes from the Spurs franchise, which is like the Knicks organization but just the exact opposite. Locking down a coach with the track record and background of someone like Bud is an opportunity that doesn’t come around every day. The Knicks would do well to pounce on it.

There are concerns about his willingness to accept a job without any type of managerial role included. He was both head coach and the president of basketball operations in Atlanta, seeing a bevy of good signings be undermined by some poor ones. Ultimately, he’ll be judged on his performance. Take a look at Hawks Reddit. They’re up in arms. Budenholzer gave them the best season in franchise history, 60 wins, and just three years later he is out the door. The Knicks may not have the perfect timeline for Bud, but they enough going for them to at least make their pitch intriguing.

From his X’s and O’s to his connection with Tim Hardaway Jr. to his reported interest in New York, there are too many positive signs here to ignore what looks like a good match.