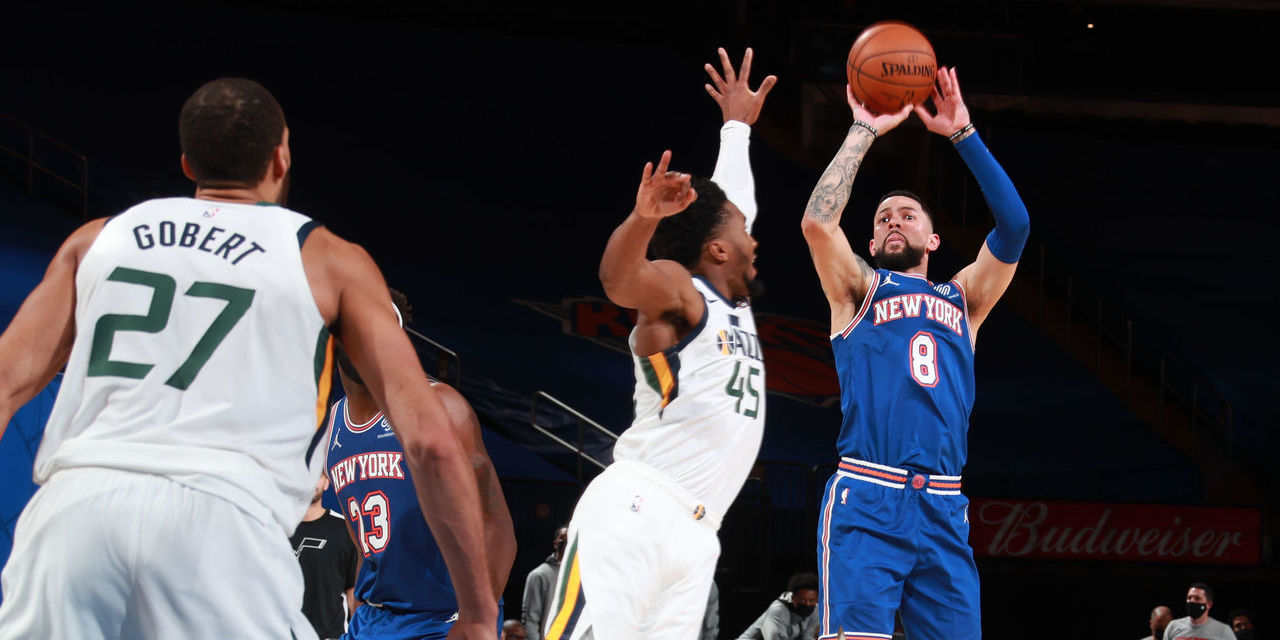 Austin Rivers came through with some of the most clutch basketball of his life, saving the Knicks in comeback fashion at home against the Jazz.

The New York Knicks (5-3) defeated the Utah Jazz (4-4) by a final score of 112-100. For Utah, Donovan Mitchell finished with 18 points, four rebounds, and four assists. Jordan Clarkson finished with 19 points and three made three-pointers. For the Knicks, Julius Randle finished with 30 points, 16 rebounds, and seven assists while Austin Rivers finished with 23 points, including 14 points in the fourth quarter alone.

At the start, this game started out as a rock fight, with neither team capable of making much of anything within the first eight minutes of the game. Then, as both offenses settled down, the Jazz showed to be the better team. Offensively, Mike Conley was able to successfully operate the offense, while the team as a whole did good moving New York’s offense and finding open shooters, often Clarkson.

The defensive end is where the Jazz won this game. Holding the Knicks to just 44 points and 45.0% shooting from the field, Utah mixed up their looks, between a zone and man, to confuse the New York offense. Drives were often stymied by a waiting Rudy Gobert, while the overall length of the Jazz gave New York’s smaller guards fits.

Despite the double-digit deficit and 53.5% from Utah in the first half, the Knicks played better defense than the stats suggested. New York’s guards pestered Conley and the Jazz’s ballhandlers to the turn of eight first-half turnovers and some noticeable blunders by Conley. While Mitchell Robinson allowed a few finishes at the rim but wasn’t bulled by Gobert and Derrick Favors.

At this point, the Knicks looked flustered and out of it. After being down by a much as 18 points, the Knicks clawed their way back in the third, until the defense turned things around and Utah simply couldn’t keep up.

The defense improved in the second half as Utah’s offense was in tatters—forcing up terrible looks as New York fought back into this game. As I mentioned on Twitter, Utah’s offense is a chore to watch. There’s no one there who can create a basket outside of Mitchell, which leaves a bunch of players who can shoot, looking to create for themselves.

As a result, Utah’s offense was all out of sorts. In the same vein, New York’s two-way game was on point, generating offense by forcing miss shots and getting out into the fastbreak. To close the third quarter, the Knicks shot 58%, Utah shot 31% and the Knicks took the lead. The Jazz never led again.

Two brief takeaways before the game notes. The first is this is a good win against a good Western Conference team. The Jazz should be a top-four team in the West, and the Knicks had a good game against them, even as they were trailing. I don’t know if we’re going to discuss this team as a playoff team, but the Knicks are getting quality wins against good opponents and are looking good, even in their losses. Only the Philadelphia game comes to mind where the Knicks looked overmatched.

The second takeaway from this game is how hard the Knicks play. Even as the deficit crept near 20 points, the Knicks just played hard. There was no quit and more importantly, there was an order in the comeback. This wasn’t Randle shooting the Knicks back into the game, but rather, a fallback into basics and allowing the defense to do the work for them.

By maintaining the principles Thibodeau installed on defense, the Knicks did a good job of fighting back in this game and nabbing the victory.

The Knicks stay home and host the Oklahoma City Thunder on Friday.