AXED! Who Gets Bumped When Allonzo Trier Signs Full-Time? 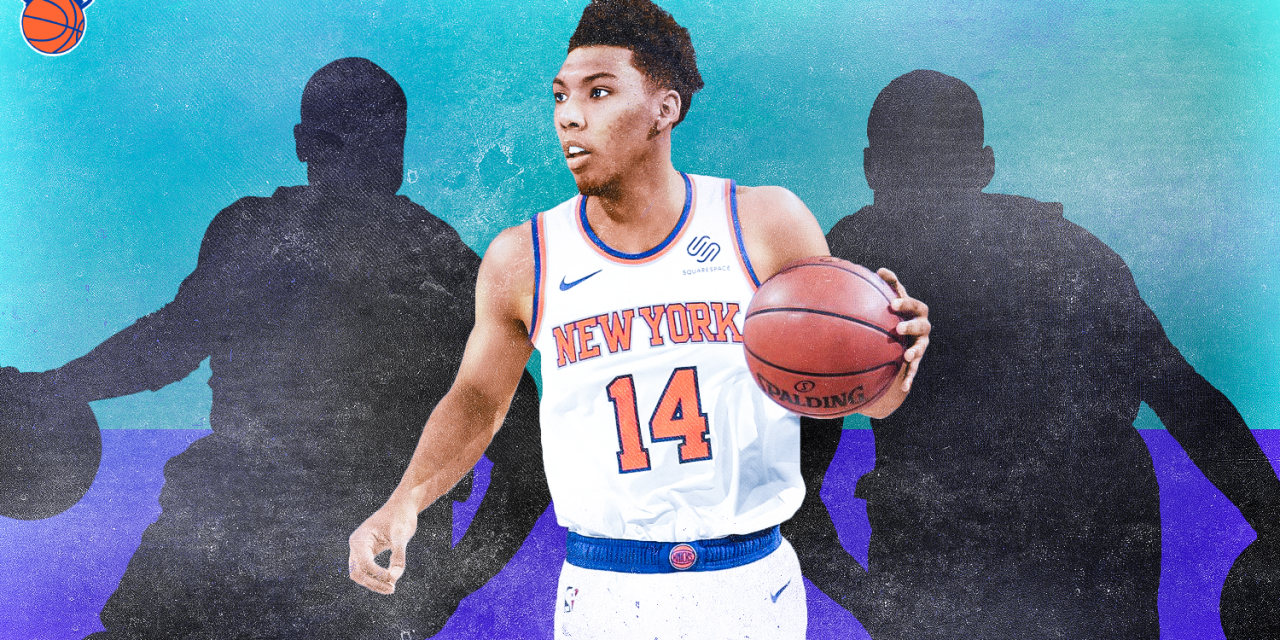 Allonzo Trier’s meteoric rise from undrafted prospect to integral part of the Knicks’ roster yields an important question following the expiration of his 45-day NBA deal: who gets cut?

4-14. Some of the losses were close, some more embarrassing than a candid baby picture, but they all ended with another mark being tallied in the losses column. It’s only November, yet the Knicks are a struggling sub-.500 team desperately searching for any semblance of an identity to build off of. The Knicks are 4-14 and it’s brick outside.

One of the few shining rays of hope this season came from the castoff second fiddle of the University of Arizona, Allonzo Trier. Since the preseason, he’s been slowly building up a legitimate highlight reel. Iso Zo, the 22-year-old shooting guard, is nice and he knows it. In fact, the Knicks know it. They know Trier’s two-way contract has limitations. Trier can only spend 45 days with the Knicks NBA-level team. Management can get crafty. In short, they’ll have to cut or “waive” someone to make room. But who?

There are a number of players who elicit a hard grunt from Knicks fans, and some who are particularly useless going forward. Let’s examine those most likely to get the axe.

Mudiay was among the first recruits in Scott Perry’s career project. The remainder of the 2017–18 season didn’t go well for him; now, well into the first trimester of his fourth year in the NBA, he’s walking a tightrope. On his left is the G League, on the right is China.

One could argue that at 22, a guard isn’t quite developed, but three seasons is plenty of time to have something to show for yourself in the league. It isn’t fair to compare anyone to a 22-year-old Kemba Walker or Kyrie Irving, but the lack of progress is disheartening. It appears that the experience he’s accrued over the course of his short career is useless.

Through the 11 games he’s played so far, he’s averaging 9.6 points, 2.8 rebounds, and 2.3 assists in 20.8 minutes. He’s shooting an impressive 51.8 percent from the floor, per NBA Stats. He was even a key contributor in a double-overtime game against the Chicago Bulls where he scored 16 points, and had a nice showing last night against the Blazers with the same point total. For a second it looked like he’s found his footing in the NBA as a backup guard doing a little bit of everything. But then you realize—then you realize…is Emmanuel Mudiay finally “good?”

Clearly, the numbers are there. Mudiay is currently posting the highest Offensive Rating of his career and a career low in three-point attempts. Somehow, he’s adjusted quite well. Fizdale’s remark, “We gonna get you right” may be coming to fruition.

Mudiay isn’t without his problems. He still can’t play defense worth a damn, effort or not. He has the terrible habit of blowing plays on defense late in the game.

All in all, as much as Mudiay haters want him gone, it’s a long shot that he’ll be cut in favor of Allonzo Trier. He’s not the ideal point guard, but he’s not a scapegoat either. If the front office decides to part ways with Mudiay, there’s a fair chance he’ll find an opportunity somewhere, even if it does start in the G League. Waiving Mudiay after such success early in the season is probably a bad move. He’s 22, and maybe he’s finally found his niche.

The poor kid can’t catch a break. He’s appeared in only nine games this season and is averaging a point, an assist, and shooting 16.7 percent from the field in 10.2 minutes. Baker’s only net positive is that he hasn’t ended up posterized, yet an injury early on probably played a part in his loss of minutes in the rotation.

Ron Baker available tonight with stitches and a huge scar on his forehead. Said he heals organically. Okay.

As far as the Knicks long-term goals go, Baker doesn’t seem to fit into them. He can switch between the 1 and the 2, sure, but the only difference is who is outperforming him. Athleticism coupled with aggressive play seem to be Fizdale’s focus thus far. Baker is lacking in athleticism and any aggressive play on his end is quickly thwarted due to being outmatched in every department.

Baker’s done his best in New York. You can’t ask much more from him than that, but as a benchwarmer, he adds nothing. His $4.5 million salary is worth less than the open roster spot that would bring Allonzo Trier into the fold. Baker’s days as a New York Knick could be over soon.

Mario Hezonja is a rather special case. He was signed as one of Perry’s now-patented reclamation projects, and may be the worst performer among them.

Statistically, he’s demonstrably worse than he was last year. Through 16 games, he’s averaged 8.8 points, 3.8 rebounds, and 1.2 assists in 19.6 minutes of action. That’s only a hair below his last year in Orlando, but he’s averaging one more field goal attempt while shooting a ghastly 39 percent from the field.

Hezonja has had his moments this fall, though it plays into how he’s a net negative for the team. Coach Fizdale seems to have keyed onto this, as he was one of three players on the roster who hadn’t been in a starting lineup prior to last night’s game—the other two are Ron Baker and Luke Kornet.

He shot 8-of-16 against Milwaukee and 6-of-8 against Toronto, but it always appears that he’s merely out for self. Through 16 games, he’s slated to post his lowest assist percentage of his career. With the majority of his minutes coming at the power forward spot, it’s easy to understand why being a ball mover isn’t his top priority—but the Knicks’ roster, abundant with wing players, is desperate for ball movement. He has the aptitude for it, but far too many times he’s shown he’d rather not.

A couple of nice plays with Enes Kanter are overshadowed by his grandstanding tactics. Whenever Fizdale trusts him at the end of close games, he opts to play hero ball, high off of his ‘Croatian Kobe’ moniker, leading to abrupt ends to Knicks runs. A garbage time legend, Hezonja can lead the charge for a comeback and then single-handedly end it.

Waiving him would have some interesting effects for the Knicks, specifically altering their rotations at small forward and power forward. It’s likely the move would give Frank Ntilikina more time at the 3, a place that’s new to him with Kevin Knox picking up more minutes alongside him. Vonleh’s ability to contribute as a small-ball center shouldn’t be lost on the Knicks so early either.

Hezonja’s numbers, independent of team play, are second-rate, and adding his lack of cohesion to the equation further strengthens the argument that he may be a frontrunner to be sacrificed. He may go down as Scott Perry’s first reclamation project that decisively did not pan out.

Burke is the perpetual underdog. After falling out of the rotation in favor of Mudiay and Ntilikina, he’s worked his way back in by being too good to be left out. He’s averaging 12.6 points, 3.2 assists, and 2.1 rebounds on the year. He’s been playing well as of late, putting up nearly 25 points per game over his last three. If the front office is thinking of getting rid of him, Burke is making it tough to come to terms with it.

At the beginning of the season he appeared lost; the offense was leaving him behind. He attempted to fit in with Fizdale’s style of play, but it wasn’t working. In October, he averaged 10.3 points on 39.8 percent shooting. A decrease in minutes was inevitable, but in the seven games he’s played in November, Burke has averaged 14.7 points per game on a 52 percent shooting.

Right now, he’s playing within himself and embracing what he’s good at—the mid-range jumper and aggressive slashing to the basket. It’s not exactly consistent with Fizdale’s philosophy, but Burke is an offensive talent that should be utilized. The head coach has already reneged on his “keep what you kill” mantra, and has yet to give a sufficient answer for the woes on defense, so allowing Burke to contribute in his own effective way shouldn’t be a problem.

Look at how Burke splits the defense here, my GOD. pic.twitter.com/rcRaF4ko9L

However, if it is, the Knicks may stand to benefit. Burke has been a solid contributor since he first donned a Knicks uniform, inconsistent games notwithstanding. Presumably, a team looking for backcourt help this season would be willing to give up an asset for him. His new and improved game could do wonders for a near-contender with a weak bench, and his $1.7 million salary is an easy hit to take. Removing Burke permanently from the team while gaining an asset, probably a mid-second-round pick, and giving Allonzo Trier a bona fide NBA deal seems like a fair trade. He’s not the least productive by any means, but trading Burke for an open spot the team needs is a move that’s tough to argue with.

Trier, an unlikely member of the Knicks’ youthful core, needs an open roster spot, and Burke, Mudiay, Baker, and Hezonja are the most prominent players who could potentially be moved or waived to make room. Fan feelings may range from support to disdain, but the fact of the matter is their contracts and their minutes aren’t safe. Ironically, the Iso-Zodiac Killer may be indirectly responsible for one of his teammates getting the axe.