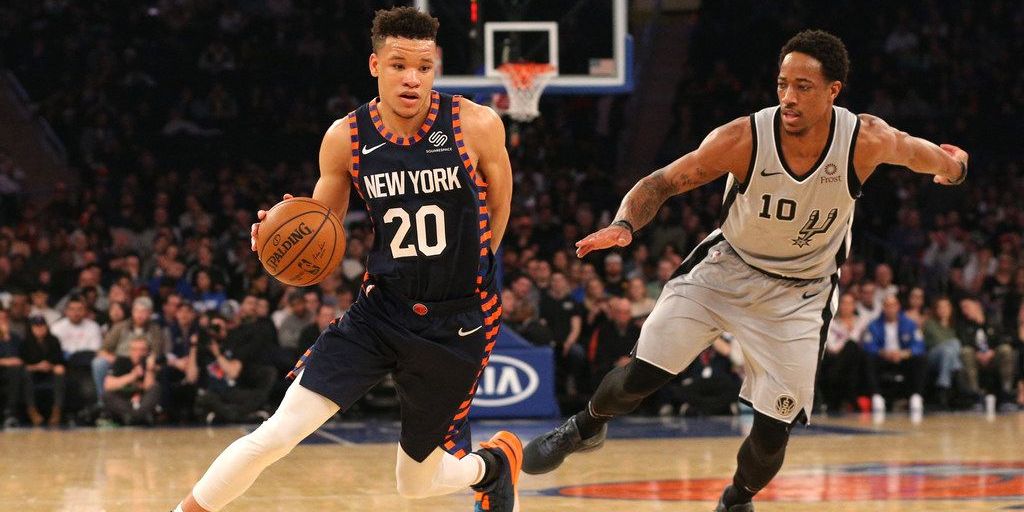 With a strong team performance, the Knicks snapped a double digit home court losing streak against the San Antonio Spurs.

DeAndre Jordan was ruled out due to an injury sustained during practice, but that didn’t stop the Knicks from beating the Spurs (33-28) in an upset victory on Oscars night.

New York (12-48) snapped an 18-game home losing streak, winning its first game at the Garden since December 1st. Here are some key notes.

Knox started the first quarter shooting 0-for-4 from the field, but ended the quarter hot—shooting 4-for-4, draining a three-pointer and converting an and-one in the process. For better or worse, he’s been a streaky player from everywhere on the court. He ended the first half shooting 6-of-12 from the field, scoring 14 points and tallying eight boards. The rest of the game was hit-or-miss for the first-round draft pick, but he did end the game with a double-double in points and rebounds.

Emmanuel Mudiay came off the bench and played like he wasn’t quite ready to give up his starting job, shooting 7-of–9 from the field and 3-for-5 from the three. He’s never been much of a three-point shooter, but (aside from the long-range heat check) he was on fire. Plus, he played a hand in getting LaMarcus Aldridge in foul trouble early on. He didn’t do a lot of passing, but as fire as he was in the first half, he shouldn’t be looking to share the rock.

Mitchell Robinson is still coming off the bench due to his penchant for foul trouble, Fizdale cited. It’s hard to argue with that, especially considering the two early fouls he picked up in his first few minutes of action in spite of coming off the bench. Still, he managed to block three shots in six minutes and set screens imperative for Kevin Knox’s scoring streak.

In the third quarter, he continued his reign of terror, blocking two more shots and catching and flushing lobs like it was nobody’s business. A clutch third-quarter offensive rebound led to Robinson assisting on a Knox dunk. His fire was infectious, and the Spurs could do nothing about it. The last-minute Dennis Smith Jr.-to-Robinson alley-oop exemplifies the hype of this game.

Thomas started as a forward and performed in undoubtedly his best game of the season. He shot 7-of-13 from the field and did his best to play stout defense against a Spurs team with superior talent. I never thought I’d see a Lance Thomas put-back dunk in my lifetime, but I did, and I don’t regret it. He scored 16 points in the contest.

The Knicks’ usual third quarter woes were nowhere to be found, as they came out with a ton of energy and got after the ball on both ends. One element of defense that has always been a weakness for the Knicks is defending the three-point line. With the Popovich-led Spurs being averse to taking threes, the Knicks had one less thing to worry about, and it showed.

Through the first quarter and a half, the Knicks kept the Spurs’ field-goal percentage down to 43 percent. The Knicks got to open up the game for themselves due to Damyean Dotson’s reliable three-point shooting. His greatest strength allowed the Knicks, namely Mitchell Robinson, to use their indomitable will inside. The lead grew to a 23 points at its largest.

The fourth quarter had the Knicks lead dropping to single digits, but Dotson’s clutch three point shooting, sound foul shooting, and consistent all-around play by the Knicks kept the Spurs at bay. Whenever the Spurs found a way to creep up from the double digit deficit the Knicks, feeding off the energy of the MSG crowd, drove them back to a comfortable margin. It was exciting, team-oriented basketball and no one could ask for more.

Numbers of the Night

Three Double-Doubles: Dennis Smith Jr., Kevin Knox, and Mitchell Robinson all tallied double-doubles in the win against the San Antonio Spurs and, for the most part, looked like they were their best selves in the win. DSJ led the backcourt, shooting 8-of-17 while dishing 13 assists with zero turnovers. Mitch was a force to be reckoned with on both ends with 15 points and 14 rebounds, while his draftmate Knox posted 19 points and 10 rebounds.

Eight Three-Pointers for Damyean Dotson: Damyean Dotson was firing on all cylinders again. He was key to the Knicks’ early success, and continued his clutch three-point performance through the rest of the game. He finished the game with 27 points on eight three-pointers made. Dotson was coming off a strong performance against the Minnesota Timberwolves, but somehow managed to surpass that against the Spurs. Even more, he appeared to be clicking with running mate Dennis Smith Jr. in the backcourt.

The Knicks ended their home-game losing streak tonight against the San Antonio Spurs, outscoring the playoff contender 130-118. It’s unclear if this means anything in the greater scheme of things, but it is surely a step in the right direction for the club.