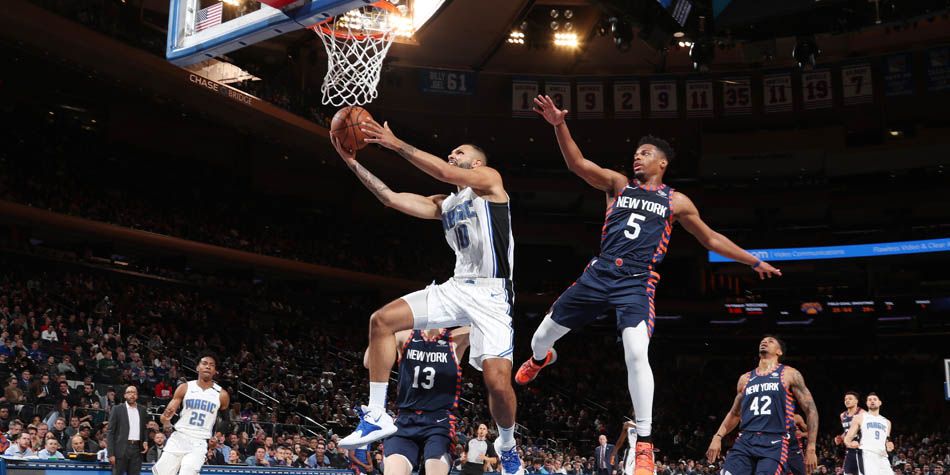 A career night from Mitchell Robinson and 10-day signee Henry Ellenson helped the Knicks grab ahold of a late lead down the stretch to defeat Nikola Vucevic and the Magic.

Following Sunday’s victory over San Antonio, which snapped a franchise-record 18-game home losing streak, the Knicks (13-48) are back in the win column, defeating the Orlando Magic (28-34), 108-103.

With this victory, the Knicks have won consecutive games for the first time since November…

Let’s take a peek at what went down in tonight’s contest.

It was a huge evening for the Knicks’ bench. After falling behind 34-20 in the first quarter, the Knicks’ bench unit provided the necessary energy to bring them back into the game. In just one quarter alone, the bench was able to cut a 14-point deficit and trail by just five entering the half. In the end, the Knicks’ bench accounted for 75 of the team’s 108 total points. A truly remarkable effort.

In a lost season, I think it’s easy to say that the most enjoyable thing to watch as a Knicks fan has been the development of Mitchell Robinson. He has been an absolute menace in the month of February. Tonight, Robinson recorded his second straight double-double, posting 17 points, 14 rebounds, six blocks, and three steals in 33 minutes of play. Averaging just 18 minutes per game on the season, Robinson is third in the league in blocks per game and first among rookies. Coach…I think it’s time to start this man.

While one rookie excelled, the same could not be said about the other. As a matter of fact, it was a complete and utter nightmare for the ninth overall pick. In 27 minutes of play, Knox scored eight points and added five rebounds, shooting a dismal 3-for-16 (18.8 percent) from the field and accounting for a team-worst -18 plus/minus rating. It was arguably one of the worst performances for Knox in a Knicks uniform, who looks to bounce back in Thursday’s contest. He had plenty of good looks throughout the night, but his shots just weren’t falling. Keep your head up, rook.

If somebody told me that Henry Ellenson would lead the Knicks in minutes played tonight (36) and hit a clutch three-point jumper to extend the Knicks lead by four with just over two minutes remaining in the game, I would have them tested. Welcome to the 2018–19 Knicks season, where fantasy becomes reality.

In just his second game with the Knicks and 61st game in the NBA, Ellenson posted 13 points, nine rebounds, and five steals. He was a catalyst off the bench, providing a much-needed spark for the Knicks’ unit. It will be interesting to see if this performance was a flash in the pan for Ellenson, one of many Last Chance U–type players on the ‘Bockers, or if he can replicate this type of play moving forward.

THEY CALL ME BIG ELLIE

One of the quietest stars in the league (whether it be due to his monotone personality or the small market of Orlando, or both), Nikola Vucevic had himself yet another stellar performance. The 2019 All-Star recorded 26 points, 11 rebounds, six assists, and three blocks in 34 minutes of game action. It marked the eighth double-double in a row for Vucevic, who looks to lead the Magic moving forward on their quest for a playoff spot in the East.

Still one quarter to go. pic.twitter.com/Cc4J802TP2

Riding a two-game winning streak, the Knicks are back in action Thursday at home, when they face the Cleveland Cavaliers at 7:30 p.m. ET.