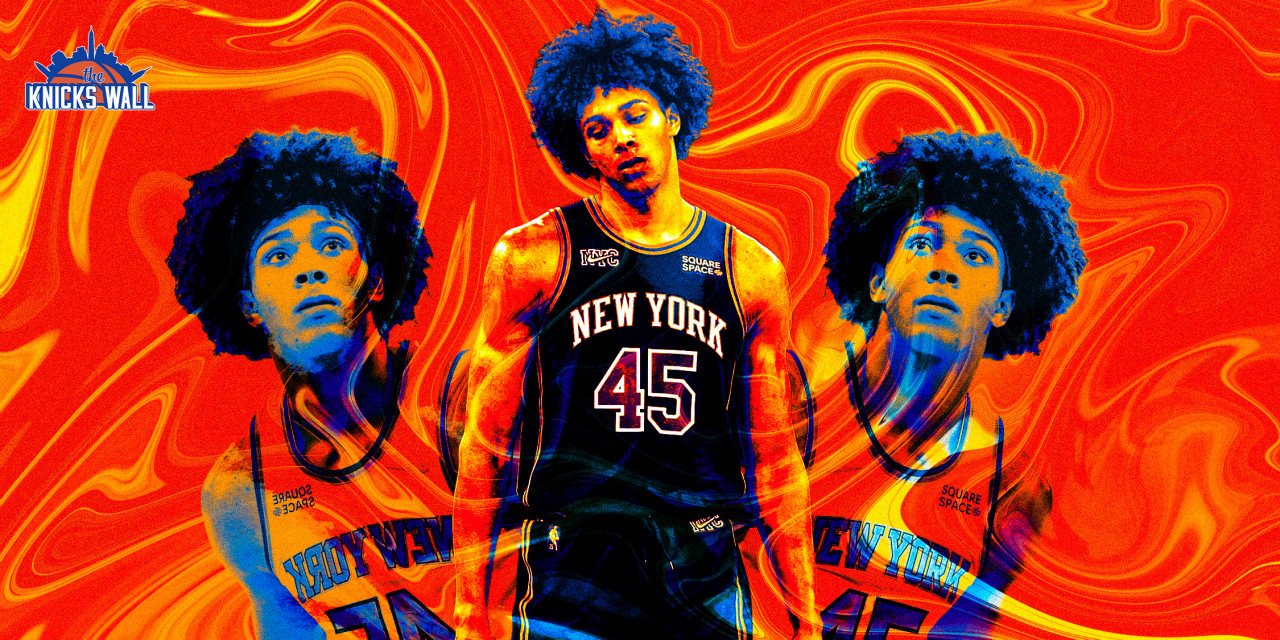 Jericho Sims’ recent rise has questioned unrestricted free agent Mitchell Robinson’s long-term role on the Knicks, but the rookie has plenty of ways to go before overtaking the fourth-year center.

It seems like the New York Knicks nabbed another difference-making center in the second round. Once given the opportunity, rookie Jericho Sims, selected with the 58th pick of last year’s NBA draft, has turned into a contributor—a rare bright spot amidst one of the most dismal stretches of a disappointing season.

However, while Sims brings some much-needed energy to a too-often lethargic roster, his success shouldn’t signal the end of another second-round center’s tenure in New York. With Mitchell Robinson slated to hit free agency this offseason, some have suggested letting him go and relying on Sims to provide a portion of Robinson’s production. It is tempting to roll with the cheaper option to save future cap space, particularly for a player like Robinson who has certain offensive limitations.

Sims has been able to make an impact as a roller thanks in part to his 44-inch vertical (the second-highest in NBA Combine history), and his propensity for tip-out rebounds is reminiscent of Tyson Chandler. He’s constantly moving at both ends of the floor, flashing into the paint or hurling himself towards the rim on offense, and constantly trying to disrupt opponents on defense.

He absolutely has a role on the Knicks going forward, but Knicks fans should be looking to pair him with Robinson. Despite being a rookie, Sims is turning 24 this October. Robinson, who’s in his fourth year in the league, turned 24 on April 1st.

In their last game, Sims tallied three blocks in an impressive effort against the Brooklyn Nets, and since receiving more playing time over the last few weeks, he has been able to block shots more consistently. But, per Cleaning the Glass, since entering the league, Robinson has ranked in the 99th, 96th, 81st, and 96th percentiles in block percentage and has improved his foul percentage every year. And this season, Robinson’s offensive rebounding percentage on field goals is 15.1%, also good for the 96th percentile for bigs this season.

Cleaning the Glass ranks Sims as above average in block percentage, but dings him for his propensity for fouling. He is, however, already a terrific offensive rebounder, thanks in part to those aforementioned tip-outs.

via Cleaning the Glass

Steven Adams is an elite offensive rebounder, but not nearly the rim protector Robinson is. He is making $17.5 million a year, and with the Knicks’ current other options being an oft-injured Nerlens Noel and a soon-to-be 37-year-old Taj Gibson, the front office is looking at spending that sort of money on the center position regardless. Sims has done an admirable job filling in, but asking him to step into a full-time starting role next season is too much. The Knicks should be looking at Sims as a backup for Robinson, not a replacement.

There’s also something to be said for keeping this young core together. An early-second rounder, Robinson’s been by far one of the Knicks’ best draft picks by value. The front office put off an extension to see if he could stay healthy, and he’ll play at least 72 games this year.

They lost this gamble and should pay up, not only has he developed a nice chemistry with their now-and-future star, RJ Barrett, but a Robinson-Sims center rotation means there can be a great offensive rebounder on the floor at all times. Both centers can make defensive plays on the perimeter in different ways, be it Robinson smothering three-point shooters with his length, or Sim’s ability to move laterally with smaller guards and forwards.

Neither center can stretch the floor, but both can collapse a defense by rolling to the rim, opening up space for shooters. This limitation is no reason to choose one or the other—especially if Obi Toppin’s recent shooting improvement is real—in fact, they are and would be a hell of a one-two punch going forward built around Barrett.

When you draft young players you should want to keep them around, replacing one with another makes sense in certain situations, but right now the Knicks have a pair of promising 24- (or 23-and-a-half) year-old centers. Breaking them up is too short-sighted and puts undue pressure on Sims. Continue to give him more minutes, but don’t put too much on his shoulders this early.