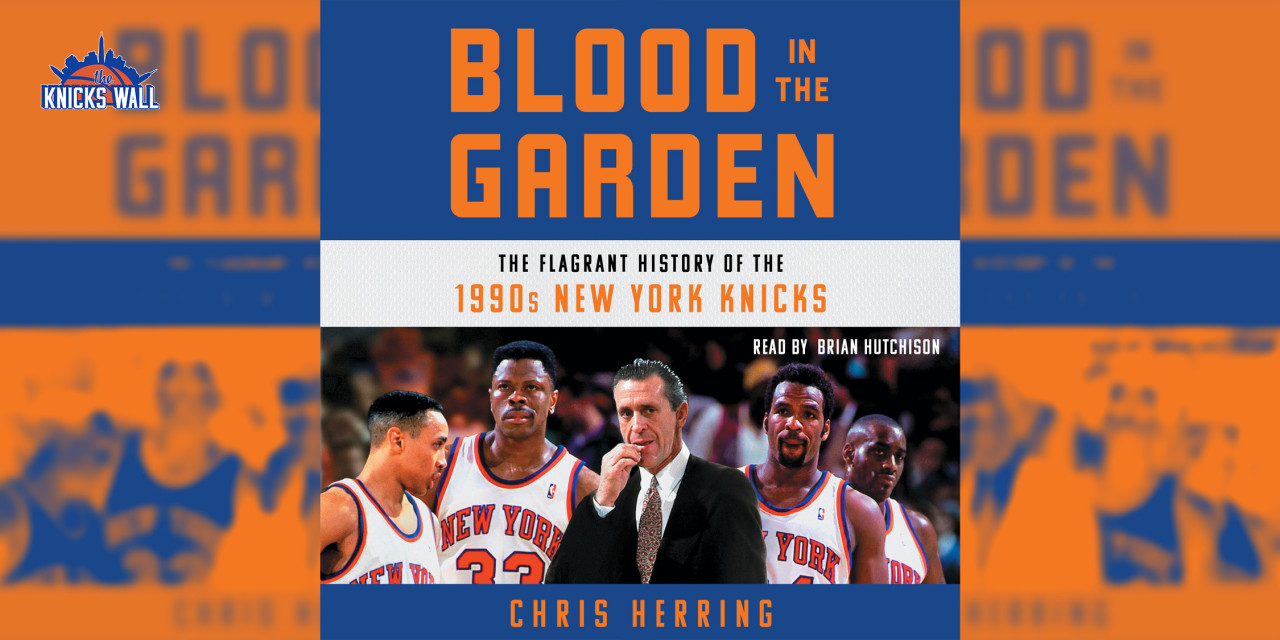 I was born in 1993 into a baseball house. I watched nearly every single Yankees game with my mother who grew up in The Bronx. My sports fandom during my childhood was monopolized by Derek Jeter, and it wasn’t until my early adolescence during the mid-aughts when I branched out beyond the diamond to the gridiron and the hardwood. And even then it took a few trips to the Garden and the consecutive arrivals of Amar’e Stoudemire and Carmelo Anthony to permanently tar me with the label “Knicks fan.”

For basically my entire life until now, the men who make up the main cast of this history—Patrick Ewing and Pat Riley for starters—were in essence, mythical figures. Closer to being legends than living men, and this is why I had been anticipating Blood in the Garden: The Flagrant History of the 1990s New York Knicks (Atria Books) since I first heard author Chris Herring mention the project.

Herring, now a senior writer for Sports Illustrated, covered the Knicks for the Wall Street Journal from 2012 through 2016. A Chicago native, Herring was four when Riley came to the Knicks and doesn’t recall much at all of the Knicks-Bulls rivalry, instead, he came to the book with a perspective similar to that of many of its soon-to-be readers, that of one who was familiar with the history and influence of the team, but lacking more personal memories or biases.

On The Knicks Wall Podcast, Herring told us, “It’s funny because when I covered the Knicks and people would be like, ‘oh but he’s from Chicago… he’s a hater’ like if I write a story that’s critical of the Knicks. It was like, I really don’t remember much from my Bulls childhood, and the fact that I’m admitting this as far as I didn’t recognize the Knicks as a rival because they kind of weren’t at that point. They were, the league certainly wanted them to be, but by that point, the Knicks were much bigger rivals with the Heat.”

Much like his coverage of the Knicks, Blood in the Garden is well-researched, informative, and most importantly, engaging. Herring blends together a chronological retelling of the decade, including enough background on the figures that defined one of the preeminent teams of the decade—namely but not limited to, Riley, team president Dave Checketts, Ewing, John Starks, Anthony Mason, and Charles Oakley.

Odds are good that if you’re here reading this, then you are a Knicks fan, but any basketball fan is going to enjoy this. Herring refers to the Knicks as the “brute-force version of Forrest Gump”—showing up in historic moments throughout the decade.

The ‘90s were a pivotal point in the NBA’s history, Magic Johnson and Larry Bird made the league a national commodity in the ‘80s, and a decade later Jordan made it a global phenomenon. Every hero needs a villain, and the Knicks were uniquely positioned to fill the role. Constantly appearing in Jordan’s path, and employing a style reminiscent of the “Bad Boy” Detroit Pistons of the decade before, the Knicks ended up as a pitch-perfect antagonist for Bulls. And their repeated maulings of Jordan helped usher in this new era of ball as the main catalyst behind the implementation of the hand-checking rule.

Blood in the Garden is an excellent companion piece to 2020 miniseries The Last Dance for any basketball fan, an informative and captivating text covering one of the premier franchises from a nigh-mythic era. Though in this case to many ‘90s basketball fans, it may read as an attempt to give the bad guy a likable backstory.

However, for Knicks fans, this feels like the seminal text, required reading even. It begins with Riley’s arrival in New York in 1991 and carries on through the 1999 NBA Finals loss to the San Antonio Spurs. Along the way, we get in-depth looks at all of the decade’s major figures—be they players, coaches, or executives—with more than enough behind-the-scenes anecdotes to keep every long-time fan glued to the page, no matter how much time they may have spent flipping through the back pages of The Post back in the day.

Once, after a 1996 home loss to the Sacramento Kings, Mason left a note in then–head coach Don Nelson’s office which read, “IF YOU F–KIN’ TAKE ME OUT OF A GAME AGAIN, I’LL KILL YOU,” after a benching. A story that Herring credits to former assistant coaches Jeff Nix and Bob Salmi. There are numerous anecdotes like this to get into each, but needless to say, Blood in the Garden is packed with previously unreported details that elucidate the mood inside MSG; in this case Mason’s intensity as well as the players’ contempt for Nelson as a coach.

Herring pulls from over a dozen sources, which include a myriad of books, newspaper articles, podcasts, and videos, but as he explains during a short note at the end of the book, the bulk of the information comes from interviews that he conducted over the course of two-plus years, with more than 200 people with ties to those Knicks squads. Some spoke under the promise of anonymity—though more are listed along with the dates of the interviews—in a documented appendix.

It would be easy for an author to get bogged down in these details, to do their best to cram every interesting nugget and end up with a rambling, incoherent mess. Instead, Herring, like a dutiful reporter, relates everything back to the lede. He could easily get weighed down in the lives of the likes of Mase and Oak, but these tangents all add to the narrative. They give life and background to New York’s cast of characters, adding context for fans, whose memories of these teams stem from either stories passed down from their elders, YouTube, or just cultural osmosis. Herring is able to fill in the gaps between the historic moments, letting the reader see the men behind the narrative while continuously advancing it towards the spoiled ending of a ring-less decade.

Everything is bigger when you’re a kid and that gets magnified when things only exist on your periphery. Patrick Ewing may as well have been Paul Bunyan to a young Yankees fan who only sees him on a classmate’s folder or hears his name on the radio as his parents listen to 1010 WINS. But Herring manages to shrink legends like Ewing and Riley down in ways that make the reader feel like they’re standing on the sideline at practice or riding along on the team bus after a game. He’s managed to take us back in time and behind the scenes making Blood in the Garden a worthy pick-up for any basketball fan, and a near-holy text for any Knicks fan.