Could Bogdan Bogdanovic Bring the Knicks Into the Future? 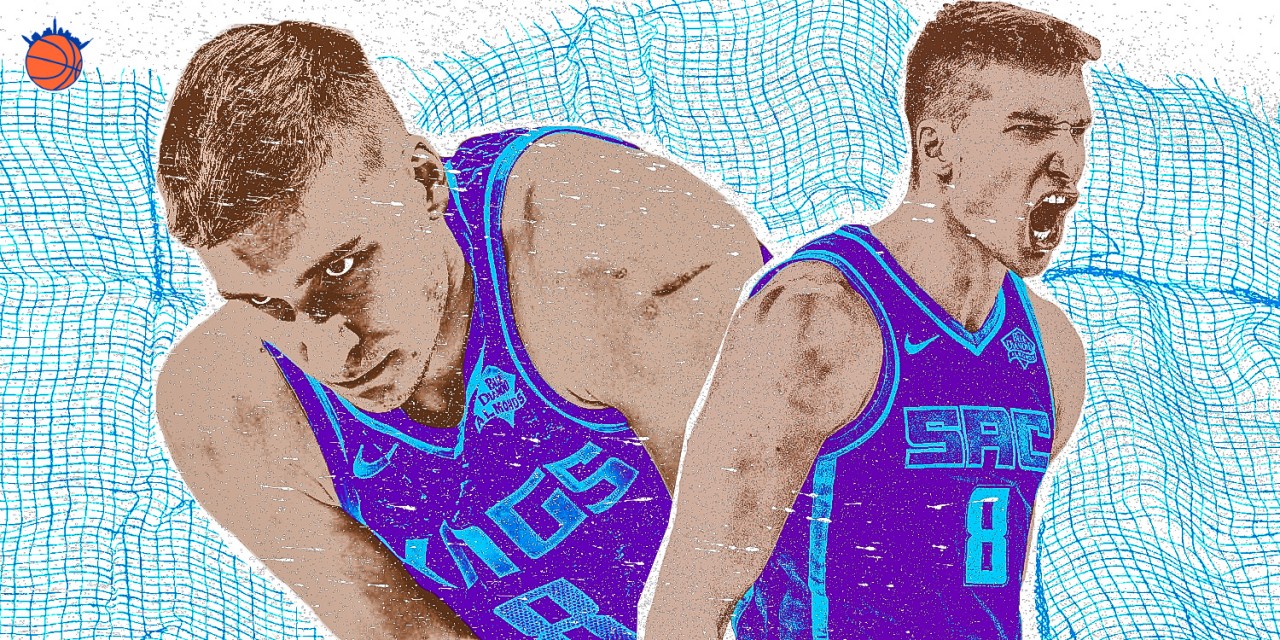 Third-year Serbian wing Bogdan Bogdanovic had a strange season with the Kings, and the Knicks would benefit from signing the restricted free agent.

After the New York Knicks traded away their best prospect since Patrick Ewing for a point guard who shot less than 40% during his ‘Bockers tenure and cap space that was used to overpay bench players, it’s understandable why New York fans spend more time thinking about the good old days then discussing the team’s future. It can be hard to believe that optimism is anything but a lie when fans have spent decades convincing themselves and others that Landry Fields, Langston Galloway, Eddy Curry, or Tim Hardaway, Jr. was going to be a stud.

Although the next season will bring a mainly new front office and coaching staff, it’s hard to be hopeful when time after time the new decision-makers quickly become the old decision-makers after leaving the team in ruins. Among the horde of important moves New York will need to make once basketball things return again is figuring out what to do with the Knicks’ cap space.

If the new Knicks brass wants to seriously improve their future, they should look at restricted free agent, Bogdan Bogdanovic. The current Sacramento Kings wing is an easy choice for the Knicks to chase this upcoming summer.

Every good NBA player has at least one elite skill. For the third-year guard, that superlative ability is his outside shooting.

Despite consistently increasing his launches from beyond the arc, Bogdanovic’s percentage on three-balls has remained the same at 36%. That number is misleading due to the King’s failure to put the ball in their shooting guard’s hands at the opportune time. Bogdanovic shoots 39% on catch-and-shoot threes, per NBA.com, but with only one true point guard on the roster, De’Aaron Fox, Bogdanovic rarely has anyone capable of setting him up.  When he does receive the ball on the move, he makes defenses pay:

It’s clear that head coach Luke Walton inspired Bogdanovic to bomb away from deep no matter how clean the look, which keeps his shooting percentages lower than they could be, but his perfect form and elite catch-and-shoot numbers prove there is an even better shooter waiting to burst out. For context, Bogdanovic shot better than Marcus Morris did during his half-season with the Knicks. Imagine a player shooting better than that version of Morris while also being more than willing to share the ball.

Pairing two above-average passers (Barrett and Bogdanovic) with a point guard could bring dramatic changes to the team. What is the point of anyone cutting when they know Julius Randle, Bobby Portis, or Dennis Smith Jr. won’t look their way? Signing the Serbian guard would not only increase the number of dangerous scorers, it could also increase everyone on the team’s ability when they know they will be rewarded for cutting hard to the rim or the three-point line.

While discussions about Bogi’s talent as an offensive player are often all anyone mentions when discussing the 27-year-old shooting guard, his defense is arguably his greatest strength after shooting. He knows how to bother players while not falling for fakes or crossovers and puts pressure on the offensive player without fouling, which are all due to his effort and intelligence.

Look at how he handles defending in transition and his effort to cover up for other player’s failures:

He would instantly become one of the Knicks’ smartest defenders, and his effort could inspire some of the Knicks’ less motivated defensive players. While it’s fun picturing him wearing orange and blue, do the Knicks have a chance of acquiring him from Sacramento?

The Kings have a slew of 2 guards with Buddy Hield signing a $94 million contract extension that lasts until 2024, Cory Joseph on a $12 million a year contract until 2022, and the reinvigorated Kent Bazemore will probably sign on the cheap this summer. Kings’ general manager Vlade Divac passed on current All-Star, future superstar, Luka Doncic, for the ever-injured Marvin Bagley in order to keep the ball in Fox’s hands. Why would he throw most of Sacramento’s cap at a player with a similar skill set as Doncic, which could potentially not leave enough money to keep Bagley or De’Aaron Fox?

Their front office will most likely low-ball him which would allow for any team to pick him up. Luckily, the Knicks are one of the seven teams that will have cap space this summer and can offer Bogdanovic one of the biggest roles.

Pairing with the Knicks’ Future

Remember when the Knicks surrounded their prospects with fitting role players? Yeah, me either. With Barrett and Bogdanovic, the Knicks could have two offensive threats that could pose massive problems for the opposing defense, especially if the coaching staff moves Barrett to the three spot and drafts an elite point guard with their high draft pick. A starting lineup of Cole Anthony, Bogdan Bogdanovic, Barrett, Kevin Knox, and Mitchell Robinson would be so exciting to watch after a year of Julius Randle and Bobby Portis post-ups. The biggest takeaway from that lineup would mean Barrett no longer has to be a spot-up jump shooter and can devastate in the paint while defense have to respect Bogdanovic at the three-point line.

In his limited rookie season, Barrett confirmed his pre-draft strengths: gets the rim at will, can play-make and rebound well for a 2 guard, and defends at a high level, but also his pre-draft weaknesses: terrible shooter, reluctant passer, and poor finisher at the rim. New York’s roster only helped amplify those weaknesses due to the Knicks’ poor outside shooting and selfish players who failed to hit Barrett when he was open.

By bringing Bogdanovic and an elite prospect at point guard, the Knicks could put Barrett in a position to capitalize on those strengths by actually surrounding him with shooting and willing passers. On the defensive end, picture Ntilikina, Barrett, Robinson, and Bogdanovic all on the court at the same time. Having a team of committed and smart defenders has been a dream of Knicks fans for decades.

Signing Bogdanovic is a very attainable and exciting possibility for the New York Knicks. By bringing shooting and high basketball I.Q., he could bring the Knicks forward in ways that few non-superstars are capable of.