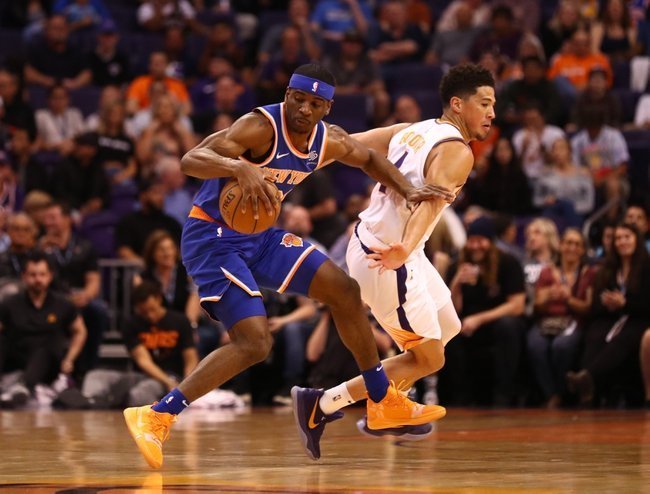 The New York Knicks maintain the NBA’s worst record with 107-96 loss to Devin Booker and the Suns in the Copper State.

In tonight’s battle of lottery-bound teams, the Knicks (13-52) did everything in their power to make sure that the tank continued to roll on. New York played horrendously sloppy basketball all evening to the tune of 21 turnovers and looked disinterested in competing after the first quarter.

Offensively, the Knicks couldn’t get into any sort of rhythm and defensively they had extreme difficulty guarding the Suns’ jump shooters. The game was very much in reach until the Knicks bottomed out in the third quarter as they so often do. Phoenix (15-51) is a much more athletic team and was able to run the Knicks out of the gym—a very concerning sight, given that the Knicks are such a young group of guys.

Devin Booker was a walking bucket tonight, pouring in a season-high 41 points on 6-for-10 shooting from behind the arc. The Knicks inexplicably left Booker wide open on several occasions, and he made them pay from the perimeter as well as the paint. Being that D-Book is one of the most elite offensive guards in the league, it is no surprise that he feasted on the Knicks, but there didn’t seem to be any adjustments made by Coach Fizdale to try and slow down the 22-year-old after he got hot.

Alongside Booker, Kelly Oubre Jr. gave the Knicks fits all night defensively while also chipping in 18 points as the suddenly red-hot Phoenix Suns have won three straight games and have distanced themselves a bit from the Knicks in the race for the worst record in the NBA.

DJ Back in Action

After missing the previous five games with an ankle injury, DeAndre Jordan made his return to the lineup and had a strong game with a double-double, 17 points and 14 rebounds. Jordan was one of the few Knicks to show any passion this evening and almost threw down a monstrous poster over Dragan Bender in the third quarter.

DJ is the only player on the Knicks roster with ample playoff experience, so it must be tough for him to go through such a losing situation. Seeing Jordan setting the tone, playing so hard and be willing to mentor guys like Mitchell Robinson shows the kind of professional he is. Keeping DJ beyond this year is becoming more and more of a possibility with great performances like these.

Another game, another frustrating performance from Emmanuel Mudiay. In 17 minutes, Mudiay scored only two points and turned the ball over five times. Despite having a sensational stretch this season in which he was a scoring machine, Mudiay over the past couple months has been tough to watch. His numbers have not been that bad this season, but Mudiay seems to constantly play out of control and not be consistent enough offensively to warrant the amount of playing time he has received.

The 23-year-old just doesn’t seem to fit the Knicks’ current and future plans and has fans waiting anxiously for Frank Ntilikina to come back.

The Knicks are back in action on Saturday at home in a rematch with the Sacramento Kings.