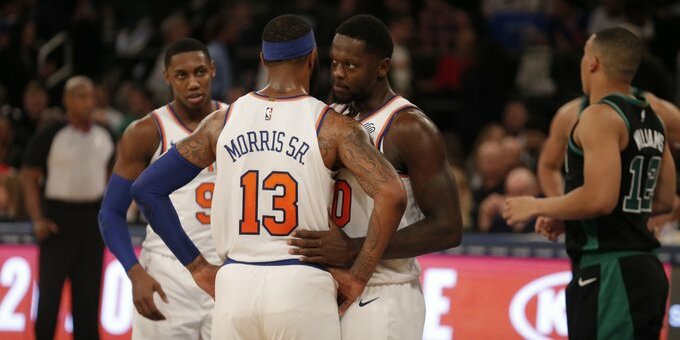 After an early lead, and despite impressive performances from R.J. Barrett and Mitchell Robinson, the Knicks ran out of luck against the Boston Celtics in New York’s home opener at the Garden.

There was a palpable buzz in Madison Square Garden as the New York Knicks played their first home game of the 2019–20 season.

The team started off hot, sprinting to a 16-4 lead, and it was just about all down hill from there. Even with a five-point lead at the half, it felt as if the game was slipping away from the Knicks.

That feeling came to fruition in the second half as the Knicks’ turnover woes continued and they completely fell apart. Kemba Walker, the New York native and free-agent target last summer, became more and more of a problem, and the Celtics ran away with it in a 118-95 final—topped off with four points from Boston’s Tacko Fall in the role of the human victory cigar for the Celtics.

Starting with the negatives, one would be remiss not to mention Dennis Smith Jr. The Knicks’ battle at the point guard spot has been a major talking point this year; David Fizdale said today that Smith would be the backup point guard, and fellow third-year guard Frank Ntilikina would be in his “pocket” if need be.

Turns out he meant deep in his pocket, as Ntilikina only played 18 seconds at the end of the half. Even though Fizdale has been clear that playing time will be earned not given, Smith continues to get minutes despite his struggles in all aspects of the game. Smith finished with a plus/minus of -15 in 11 minutes of playing time, while going 0-of-3 from the field.

The biggest issue for the Knicks came from turnovers, where they doubled the Celtics’ 12 turnovers with 25 of their own—and it felt like even more than that. Four of the Knicks’ five starters had at least four turnovers, with Mitchell Robinson being the lone man with a single one.

For their third loss in as many games, the Knicks have allowed at least 110 points, and tonight was no different with the defensive struggles—particularly when it came to defending Walker, who finished with 32 points, including 21 in the second half. The Knicks did not have a guard who could defend him, or at least not one Fizdale was willing to play.

While positive takeaways were few and far between in this game, there were at least two players who showed why Knicks fans can not only remain positive about their futures, but also the present: none other than first- and second-year players R.J. Barrett and Robinson.

Robinson ended with 17 points and six rebounds in just 20 minutes while also adding three blocks. Robinson was a real presence on both sides of the court, including his highlight lobs and perimeter blocks to which we have come so accustomed. It is clear that Robinson will be a problem for opposing teams as long as he can stay healthy and out of foul trouble.

In Barrett’s MSG debut he looked entirely unafraid and ready for the moment. Whether it was declaring that he’s “proud to be a Knick” before the game, or driving down the baseline for a powerful dunk, Barrett made himself known throughout the game. He finished with 26 points, rebounds, and three assists on 45% shooting and gave Knicks fans plenty to be excited about, even if nobody else did.

The Knicks will be back at home in the Garden on Monday as they host the Chicago Bulls, and continue to look for their first win of the season.