A Bradley Beal Trade Could Make or Break the Knicks 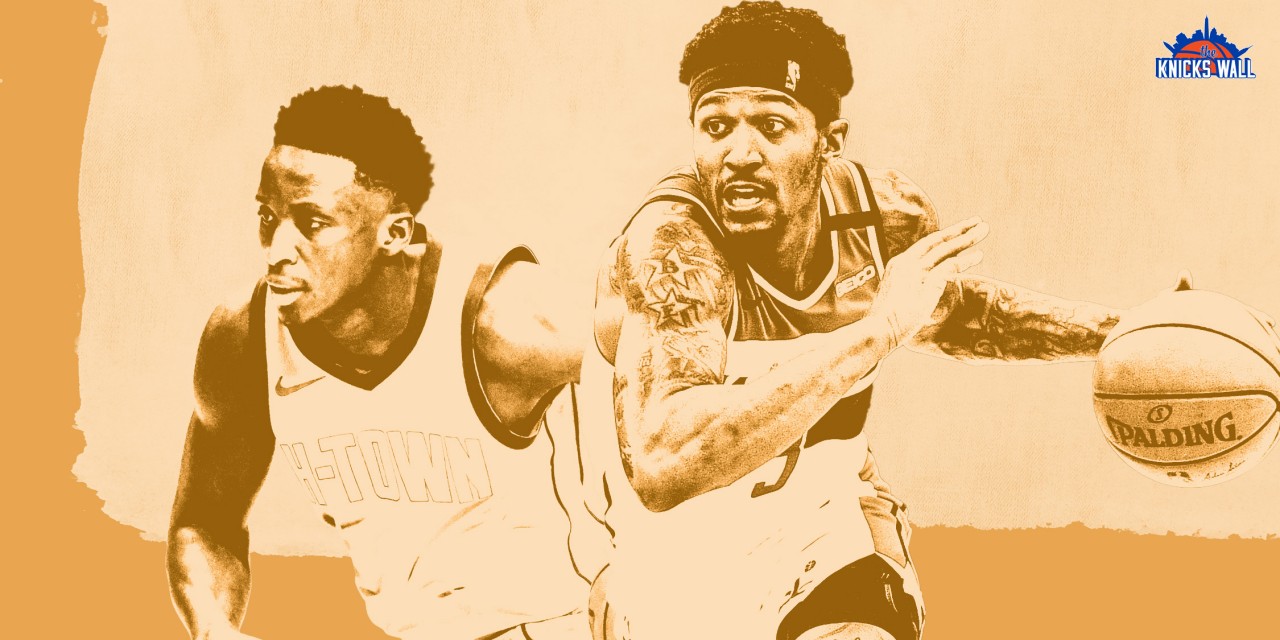 The Knicks have had trouble signings stars as free agents. After hoarding draft picks and young players, perhaps a Bradley Beal trade is on the horizon.

A tradition unlike any other: the New York Knicks have been linked to several NBA stars in trade rumors.

This year’s rumor mill spins somewhat differently than the past few, however, as the Knicks continue to solidify themselves as a legitimate threat to secure a playoff spot in the Eastern Conference. Additionally, the type of stars who might be hitting the trade market profile a little differently. The biggest names that the Knicks have been monitoring, according to Marc Berman of the New York Post, are Bradley Beal and Victor Oladipo. Beal, however, should be the focus; he is playing by far the best ball of his career on an expiring contract for a putrid team.

Since trading then-franchise centerpiece Kristaps Porzingis, the Knicks have exercised extreme patience in the trade market, choosing to stockpile assets rather than coughing up picks and players on disgruntled talent. During the past two seasons where the Knicks seemed to be directionless, this patience made a little less sense. The case against patience at the time seemed simple: cash in assets to acquire a star, which will lead to more winning, which will make the franchise more attractive to other stars. The ‘Bockers sat tight, however, and after significant development from their young core highlighted by Julius Randle’s All-Star-level play, are now among the most surprising teams this season, sitting at 14-16 and firmly in contention for a playoff spot in the East.

The factors that determine whether the Knicks should cash in on an impactful player or not are wide-ranging. Why fix what is not broken? For the first time since moving on from Carmelo Anthony, the Knicks rebuild feels like it is on the correct course. Still, it is difficult to project how else the Knicks will acquire star talent. The free agency market this summer is much drier than previously expected. The Knicks’ continued success reduces the likelihood that their own first-round pick becomes a star with each successive win.

Like with any NBA transaction, the Knicks’ decision should ultimately come down to cost. Should the Knicks sell the future to obtain Bradley Beal, who is playing the best basketball of his career and has one of the highest offensive impacts in the NBA, but who has not proven he can turn a losing team into a winning one?

Outside of maybe Zach LaVine, no player in the NBA more embodies the term “buy high” than Bradley Beal. Despite the Washington Wizards being the worst team in the Eastern Conference, Beal has never produced offense at a higher level in his career. According to Stefan Bondy of the New York Daily News, the price to rescue Beal from the devastation in D.C. could be similar to what the Brooklyn Nets paid for James Harden.

One NBA exec told @SBondyNYDN that to pry Beal out of DC it will take
3 unprotected first rounders, 2 pick swaps, a young player and an expiring contract.

Should the Knicks do that deal?

While that might seem high, Beal is averaging a Hardenian 32.8 points per game to go along with 4.7 assists and 5.2 rebounds in only 35.3 minutes. These numbers are impressive, but perhaps more telling is the difference in the Wizards’ offense when Beal sits. With Beal on the floor, the Wizards’ Offensive Rating is 112.0, which is similar to bordering in the top half of the NBA’s offenses. Without Beal, the Wizards ORtg sinks to 99.3, well below the ocean seafloor-level offenses that were the David Fizdale-era Knicks.

Beal’s defensive impact is the opposite (118.0 Defensive Rating with him on, would be the worst in the league, versus 103.7 when he is off the floor, which would be the best in the league). It is, however, difficult to read too much into his defensive impacts, as the starters would get rocked without Beal on the floor to keep them in it offensively.

So, would sending out something comparable to the above package be an overpay for a good stats, bad team player? The expiring contract does not factor in much, as the Knicks have a variety of veterans on extremely movable contracts.

The young player is a more pressing question. Though it is unlikely that the Wizards would be willing to open negotiations if R.J. Barrett, Mitchell Robinson, Immanuel Quickley, and Obi Toppin are off the table, let’s assume for a second that the Knicks are able to keep them out of the trade. This move looks far more appealing if the Knicks are instead able to move Kevin Knox, who according to Sam Amico of FortyEight Minutes the Knicks may already be shopping, or Frank Ntilikina, who has a lot of work to do after falling out of the rotation earlier this season and spending significant time away due to COVID-19 health and safety protocols.

Assuming the package can be an expiring veteran, Knox or Ntilikina, three unprotected future firsts, and two more pick swaps, this year’s team would improve vastly. Beal is a significant improvement over any expiring veteran on this roster, and no other rotation piece would be sacrificed in the trade. With Beal and Randle, the Knicks would find themselves a tier below the upper echelon of the Eastern Conference in terms of offensive firepower. Beal would also alleviate problems with the current Knicks’ offense: less ball-handling for Elfrid Payton, more spacing for Barrett, and a premier perimeter threat that the Knicks currently lack. Coupling Beal with the league’s third-best defense is extremely tantalizing.

Before we drink the entirety of the Kool-Aid in one sitting, let’s examine the cost: The Knicks’ front office would be betting that pairing Beal with Randle and playing these two alongside the Knicks’ developing young core would make the franchise better off than any of the talents they could acquire through making three first-round draft selections. With Beal on the roster long-term (more on this in a bit), the value of those picks would likely diminish, as the Knicks would project toward the mid-to-lower end of the Eastern Conference playoffs. Still, giving up unprotected picks is always risky business.

The largest question mark surrounding the analysis of acquiring Beal is if he intends to stay in New York beyond 2022 (he has a player option for 2022–23). This price would be significantly more absurd if Beal makes it clear that he does not want to commit to the Knicks for the long term. A one-and-one-half-year rental for Beal at the cost of the three unprotected firsts does not make sense for the Knicks. Even if this year is not a fluke and the Knicks are not slightly overperforming, adding Beal to the current roster does not increase the likelihood that they could compete with Philadelphia, Milwaukee, or Brooklyn, and therefore would not be worth paying that high a price for only this year and next.

Essentially, it boils down to the following factors. First, are any of Quickley, Robinson, Barrett, or Toppin in the trade? If so, the draft compensation needs to be lowered significantly. It would be foolish for the Knicks to consider trading any of those players and three unprotected first-round picks for Beal.

Second, do you believe this season’s success is sustainable, and that the young core and Julius Randle will sustainably compete in the East for years to come? While I think the Knicks are slightly overperforming, what we have seen so far can no longer be considered a small sample. Randle’s emergence is legit. Barrett, Robinson, and Quickley look to be impactful players. Toppin remains an interesting piece. I think if this group continues to be combined with effective veterans, the Knicks can compete for the bottom half of the playoffs for the next few years. If you view this season as a complete fluke, trading for Beal would not be conducive to the franchise’s direction, and the organization should continue to rebuild instead.

Finally, what indications do we have that Beal would commit long-term to the franchise? Not only would the Knicks be buying high to trade for Beal, but they would need to commit significant money to him. It would be a huge waste of significant assets for Beal to sign with the Knicks and demand a trade one or two years later.

In short, if Knox or Ntilikina is the young player in the trade, and if the Knicks can whittle the Wizards’ asking price to be only two unprotected firsts, this trade looks almost too appealing to pass up.