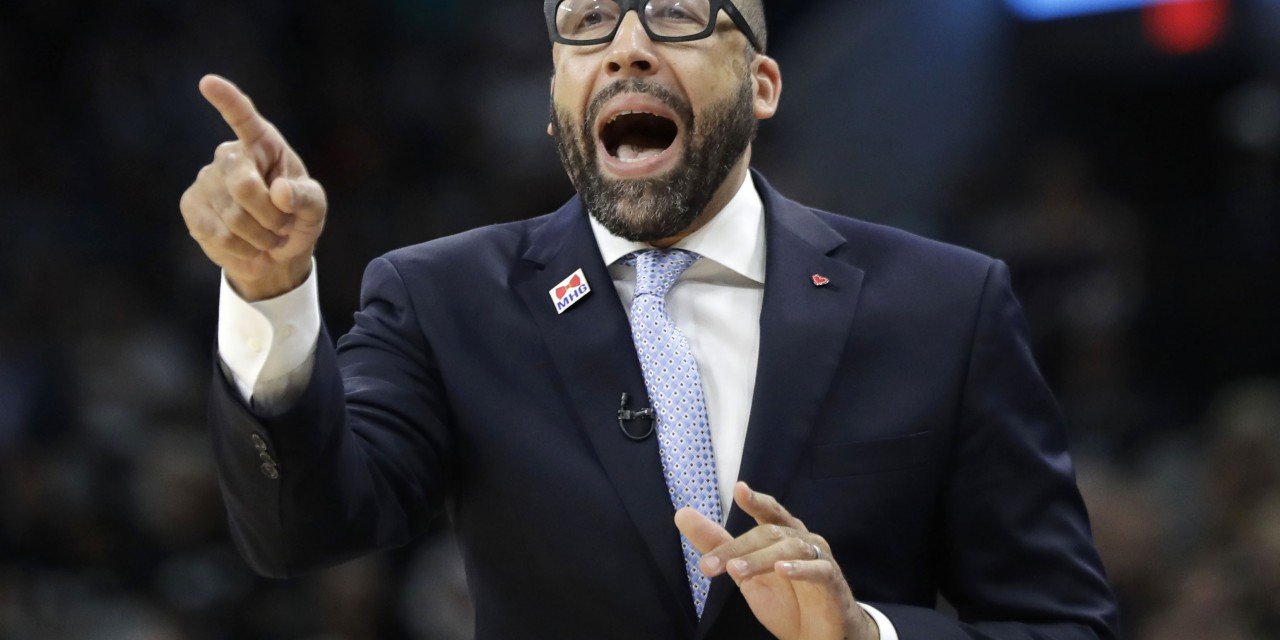 Has David Fizdale reached the far-reaching goals he set at the beginning of the season for the New York Knicks?

When David Fizdale was hired by Scott Perry to be the franchise’s 29th head coach (and fourth in the last five years), it was clear the road ahead to success for the third-year coach was full of potholes, hairpin turns, and would occasionally be washed out completely by flash floods of inexperience and a general lack of talent.

As has often been the case in the last decade-plus, success would, in many ways, require a redefinition of the word entirely.

As his introductory press-circuit got under full swing, Fizdale’s vision for the team began to emerge. He spoke of the team’s athleticism and versatility, his philosophy on position-less guards, and took ownership for the messy ending to his time in Memphis. In a refreshing departure from the ghosts of Knicks’ coaches past, he seemed realistic, not promising the playoffs, but instead laying out concrete expectations for the team.

The first thing that grabbed people’s attention was his proclamation that all five starting spots were open for the taking, an assertion that has proved to be the running theme of the season.

A couple days before Thanksgiving, when asked about yet another change to the starting five, David Fizdale replied that he hoped to have a consistent lineup he could put out there by the 25-game mark.

“We’re trying to learn,” Fizdale said. “…what’s their strengths, what’s their weaknesses, who they play well with. We didn’t know any of these guys, really, getting them all together… so hopefully we can start honing in on something we can start saying is what we’re going to go out with.”

In essence, the goal was that by the time Game 25 was in the books, some answers would have crystalized, and Fiz would have a better idea of how to get this particular collection of unforged and/or cast-off pieces to execute his vision. This is all while keeping an eye on the big picture, which in this case, is mostly the large negative space occupied by Kristaps Porzingis and his eventual return. That the time for experimentation would give way to a stability that allowed the team’s young talent to develop (an unfamiliar concept for the Dolan-era Knicks) and discover their NBA identities.

With Monday’s loss to the Wizards, the team has officially reached the 25-game threshold and currently sits at 8-17, tied with their inter-bureau rivals for the fifth-worst record in the league. The lineups he has used in the last few games still isn’t a finished product. I’ll be shocked if Mario Hezonja stays with the starters much longer, and will be equally shocked if Frank Ntilikina doesn’t start getting minutes again soon, but the rotations seem to have mostly normalized by now. Players seem to understand their roles more, and are ready for what’s expected of them.

So let’s take a look at how the team has succeeded or failed thus far in implementing the goals laid out to start the season, the trends we’ve seen in recent days and weeks, and how the coach who refuses to be rooked has faired in his attempt to draw water from stone.

Pick up the Pace!

One of Fizdale’s main talking points in the summer was the need for the team to get out and run, and for the most part, he’s succeeded.

The Knicks currently sit smack dab in the middle of the league (16th overall) in terms of pace of play, according to NBA.com’s tracking data, a number which was depressed by the team’s slow-poke October—an eight-game stretch where they ranked 23rd league-wide. In November, they ran the 12th-fastest pace, and the number seems to be climbing. In the 10 games prior to the loss to Washington, a stretch where they went 4-6, the Knicks had the 10th fastest pace in the league at 102.04 possessions per game (NBA Stats).

It’s no happy accident that this stretch coincides with their most successful extended stretch of play of the still-young season. The best way for bad teams (and make no mistake, this is still very much a bad team) to manufacture points is to get out and run. A big part of Emmanuel Mudiay’s emergence (and Ntilikina’s de-mergence) is his willingness to play at a speed closer to Fizdale’s liking.

Goal Progress: So Far, So Good

Speaking of Frank’s recent disappearing act, another early-season buzzword for Fizdale has been “accountability.” That in and of itself isn’t altogether unusual, as it tends to be atop the New Coach Talking Points bingo board, but Fizdale has shown an uncommon and refreshing commitment to the concept.

Allonzo Trier and Mitchell Robinson have been rewarded for their hard-nosed play with more minutes than anyone could have expected, Noah Vonleh has emerged as the team’s second-best two-way player and a legitimate rotation guy, and Enes Kanter was sent to the bench only to re-earn his starting spot (albeit with some grumbling and semi-cryptic tweets to grease the wheel).

After a perplexing string of DNP’s, Damyeon Dotson has re-emerged revitalized, averaging 17.8 points and 4.8 boards (on an absurd 65 percent three-point shooting stretch) while playing 26 minutes per night. Trey Burke, prior to spraining his MCL, had experienced a similar renaissance earlier in the season. After starting the season averaging 9.5 points and 3.5 assists, a series of three DNP’s in four games led to him exploding back into relevance, averaging 17 points on 41 percent from deep over his next eight games.

Ntilikina is the most recent member of the DNP club after his shooting fell off a cliff, and the “deer in the headlights” look returned to his eyes. And from this quote, it’s clear Fizdale is hoping for similar results from the young Frenchman:

“If you watch our bench tonight, he was the most energetic, the first one up, the first one rooting guys on, the one making sure people knew what they were supposed to do coming out of timeouts. And that’s not easy when you’re getting a DNP. But as you know and as they know, I will come back to him in no time. [Dotson] is a perfect testament of that.” (via Newsday)

To his credit, Ntilikina seems to be taking the right approach to the benching. Whether it will work remains to be seen—he’s a different animal than Dotson and Burke, two older players who are comfortable in their role on offense, and don’t seem prone to getting stuck inside their own heads. For now, all we can do is hope.

Goal Progress: It’s Getting Better All The Time

The Best Defense is a Good Defense

“I want to establish a top-ranked defense, a fast defense, a disruptive defense, a versatile defense, a loud defense, that sparks offense, and gets us into the open court. And once we do have to settle in, play a really free-flowing open space offense that has everybody getting involved in sharing the basketball.”

This quote from Fizdale in May was comically ambitious at the time, and remains so to this day. Constructing a top-ranked, disruptive defense around Kanter, Tim Hardaway Jr., and a slew of first- and second-year players seemed borderline impossible even before two of the team’s three best defenders (Lance Thomas and Courtney Lee) were set to miss extended time.

Currently, the team is 22nd league-wide in points off turnovers for the season and 29th overall in the last 10 games. In the month of November, they were 20th in steals per game with the third-worst Defensive Rating in the league.

There are some positives, as Vonleh and Robinson helped the team rack up the third-most blocks per game in the month of November, but mostly the defense has been pretty awful. The team has given up at least 115 points in 12 of their 25 games.

Not only that, but the “free-flowing open space offense that has everybody getting involved in sharing the basketball” hasn’t materialized. The Knicks have the highest percentage of unassisted field goalsin the league, mostly because their offense revolves around a series of ISOs for Hardaway, Burke, Trier, or Kanter post-ups. At times, it seems like the offense is promoting the most selfish tendencies of the guards, which has directly contributed to guys like Ntilikina, who don’t seek to impose their will offensively, getting lost in the wilderness.

One of Fizdale’s first proclamations as the Knicks coach was a promise to Mudiay.

“We’re going to get you right,” he said.

This was, on its face, perhaps even more ridiculous than the “top-ranked defense” quote, and yet here we are: 25 games into the season and Mudiay has gone from having one foot out of the league to being an impactful player. He even helping the Knicks take down the hated Bucks (still haven’t forgiven them for KP) in the most exciting game of the season.

Of all the work Fizdale has done in his short time in New York, this is the most impressive, and the one that gives me the most hope that he can still get through to Ntilikina. While Mudiay can still be wildly inconsistent, throw some maddening passes (according to Fizdale, he’s the team’s best passer, which may be true as it’s a low bar, but he’s at times their worst passer too), and is nowhere near the defender his size and strength say he should be, this is the first time in years he looks like he legitimately belongs in the NBA.

And regardless of whether you think he’s spending too much time developing upcoming free agents at the expense of guys presumably more in the team’s long-term plans, for that, Fizdale deserves all the commendation in the world.

This article was originally published in SNY.