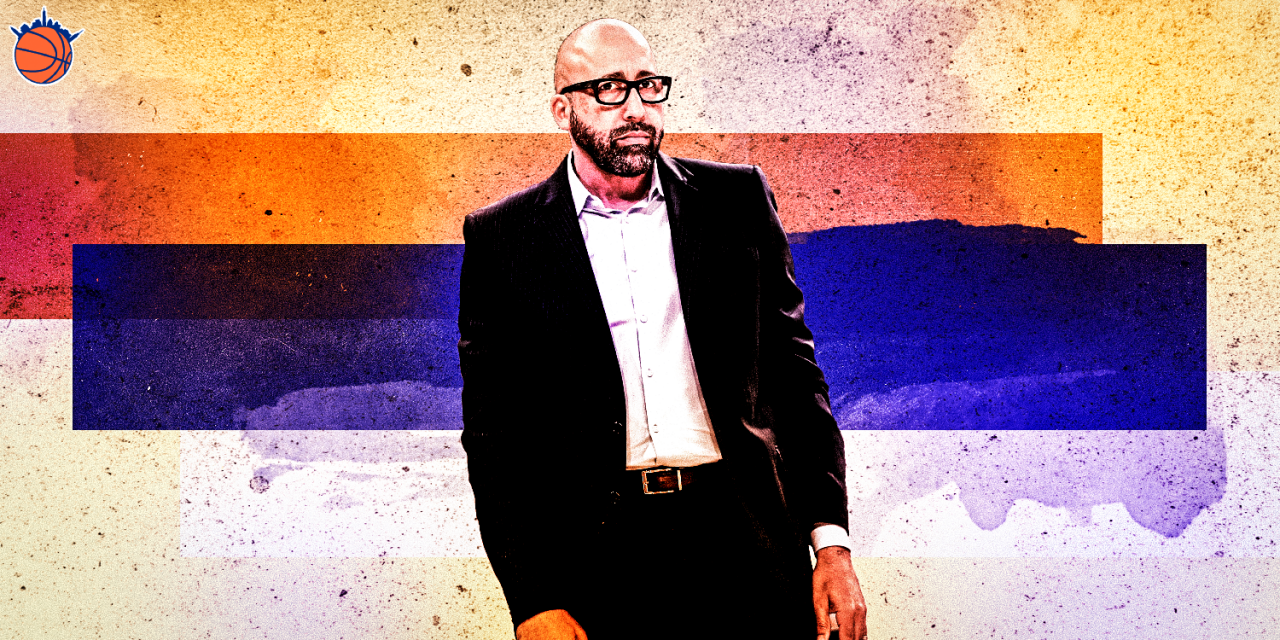 With a team mostly comprised of neophytes and passerbys, David Fizdale’s offensive system has started out smooth and simple—and wrinkles will develop with an upswing in talent.

In David Fizdale’s first year as Knicks’ head coach, New York has placed itself firmly among the league’s worst teams. Given a roster littered with inexperienced players from top to bottom and its lone All-Star on the shelf, a 10-40 start is not too surprising.

Fizdale recognizes the process of building a roster that is ready to win for consecutive seasons takes time and patience, as shown by his quotes to the media throughout the season, and most poignantly last Sunday.

“Most winning cultures start with getting your butt kicked first,” Fizdale admitted.

While Fizdale is completely correct in referring to this season as a butt kicking, examining the beatdowns closely yields the early implementation of some actions that will define the Knicks’ offense moving forward.

Mike Vorkunov of The Athletic wrote a piece earlier this week which highlighted the lack of consistent actions or style within the Knicks’ offense this season. New York plays a very free-flowing brand of offense, leading to few sharp tendencies in terms of playcall holistically. However, when narrowed into which plays are called for whom, Fizdale’s system begins to reveal itself as one tailored to the strengths of each player individually. While the Knicks’ offensive playbook is far from its final form, its foundation is currently being laid with an emphasis on letting each player stay in their comfort zone, for better or worse.

Here are some common actions within New York’s half-court offense, the most common benefactors of each play type, and how the Knicks can counter when the defense adjusts to these plays.

In most aspects, Frank Ntilikina and Emmanuel Mudiay run the point in vastly different ways. Mudiay is often more aggressive in looking to drive or take his own shot than Ntilikina, while Frank frequently defers to his teammates (to his own detriment).

Nevertheless, both point guards find a commonality in the sense that when put in a quick-hitting, motion-based action, they are effective at finding open driving lanes to the rim.

As seen in the clips above, a teammate receives a pass from the point guard then quickly hands the ball back off to the guard, getting the point guard the ball with both momentum and openings in the defense. Fizdale likely prefers this action to slow, deliberate pick-and-rolls due to the dribble handoff’s (DHOs) ability to increase the amount of passes in a possession, especially for players like Ntilikina and Mudiay, who tend to make poor decisions with the ball in their hands for too long.

This action is commonly used when Fiz wants the French expatriate to score some points—and it was used most extensively against Charlotte on December 9th, when Frank shot 7-for-11 from the field for a career-high 18 points.

Ntilikina’s size enables him to be a viable threat as a screener, though Frank often slips these screens and veers to the top of the arc, getting himself space for either a catch-and-shoot opportunity or a one-dribble pull-up, depending on the proximity of his defender. These types of actions help force Frank to stay involved on offense without simply telling him to be more aggressive.

This play type is frequently run for the Knicks’ wings, most notably Damyean Dotson; however, Kevin Knox, Tim Hardaway Jr., and Mario Hezonja have this action called for them when they’re moving well off the ball. Dotson is particularly dangerous coming off this action because he has the ability to score either off the catch or on a drive to the rim.

Dotson’s ability to score in a variety of ways off of these screens fortifies his ability as an off-ball role player on the wing. This type of play will continue to be easy money for Dot, and if teams begin to overplay this action, his screener will have either freedom to pop for a corner three or an open cut backdoor.

Finally, let’s discuss the oldest play in the book: the pick-and-roll. Obviously, nearly every player on the roster is frequently involved in pick-and-rolls this season, but its biggest benefactors can eventually open things up for the rest of the offense. One particular connection in the PnR is the fortuitous pairing of Allonzo Trier and Mitchell Robinson.

Trier’s ability to change speeds and hit shots off the bounce, coupled with Robinson’s ability to catch and finish any pass thrown within 10 feet of him, makes this duo a potent threat. While Zo’s lobs to Mitch do not come exclusively from the pick-and-roll, this simple action is the most direct way to get each player into his sweet spot on the court. As Trier develops as a passer, this spread PnR action could eventually become a focal point of the Knicks’ offense when Trier leads the bench unit.

With Enes Kanter’s benching, Robinson, Luke Kornet, and Noah Vonleh have been manning the 5. The latter of the three big men has had success as a screener in a few ways. Vonleh is very adept at initiating the screen through a dribble handoff, occasionally starting with him bringing the ball up. This versatility and mobility enables Vonleh to be a threat by either rolling to the basket, popping for a jumper, or faking the handoff for a drive to the hoop.

Specifically, Vonleh’s threat as a playmaker is accentuated when he’s playing at center, with the other four players around him typically capable of being threats from the perimeter. As a result, he’s fully capable of finding shooters as on the short roll.

What Have We Learned?

Overall, it is fair to say that Fizdale is running a very simplistic offense with few complex sets. Fiz mainly relies on running isolation, PnR, or pin downs for players who are displaying a go-get-it attitude. While this can tend to freeze out more passive offensive players (read: Frank Ntilikina), Fiz has still done well to put Frank in positions to score.

While the offense currently lacks in depth, as previously touched upon, there are ways in which these building-block actions can grow, and there are many factors beyond the X’s and O’s of the plays that should help diversify Fizdale’s offense moving forward. The most important reason for hope is a presumed influx of talent. The return of Kristaps Porzingis, more than anything else, will make life on offense much easier for everyone on the Knicks roster.

Statistically, Fizdale’s offenses in New York and Memphis are similar in terms of shot location. For instance, the Knicks have attempted a shot from three on 32.5 percent of their total field-goal attempts, while the Grizzlies had a three-point attempt rate of 31.6 percent in the 2016–17 season. New York and the 2016–17 Grizzlies were also within one percentage point of a difference between their shares of points from free throws and the midrange. Evidently, Fiz’s philosophy hasn’t evolved as much as the game has evolved around him.

An encouraging discrepancy, though, between this year’s Knicks and Fizdale’s Grizzlies, is the percentage of field goals which were assisted during his last full year in Memphis. While the Knicks are currently last in the NBA in percentage of assisted field goals at 50.7 percent, the Grizzlies assisted on 58.4 percent of their field goals in the 2016–17 season, good for 12th in the NBA at the time. This difference, accompanied with the return of Porzingis, the addition of a mid-to-high lottery pick, and potentially some established talent in free agency should help calm some of the concerns around New York’s lack of ball movement and offensive identity this season.

While New York currently plays a freelance-based offense and does not run any plays that lead to Spursian ball movement, Fizdale is doing a solid job of getting his players in their comfort zone. Growth from the Knicks should come with experience, as the neophytes continue to discover new permutations of each simplistic action.