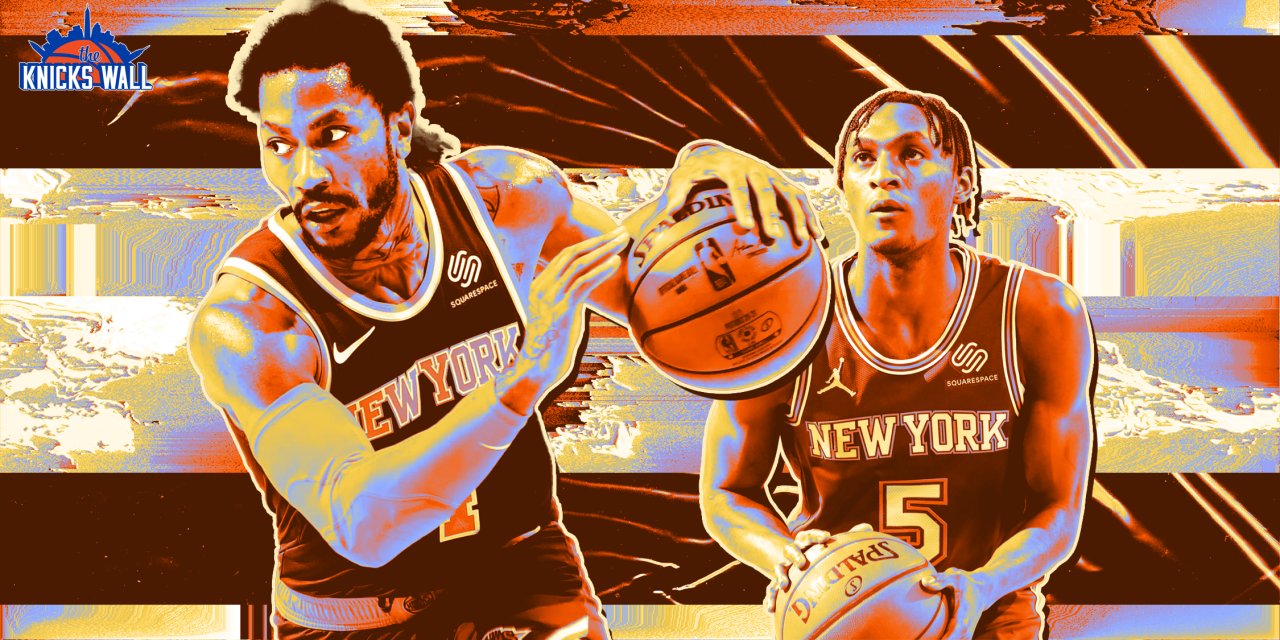 While the starting center spot has changed due to injury, Tom Thibodeau has kept Elfrid Payton at point guard steadily for the Knicks. Should that change?

In a year that has exceeded expectations for all, the most controversial topic about the New York Knicks has been the point guard rotation between Elfrid Payton, Derrick Rose, and Immanuel Quickley.

With just 16 games left in the regular season and the Knicks in a heated race to finish top-six in the Eastern Conference to avoid the play-in tournament, the question that we’ve been asking all season remains: Is Payton starting with Rose and Quickley coming off the bench the best way for the Knicks to operate the rotation for the rest of the season?

Let’s break down the pros and the cons of all three point guards getting the start.

While there aren’t many pros of Elfrid Payton starting at point guard, there is one that’s extremely important, which is the fact that he isn’t coming off the bench. It sounds like an obvious statement, but if Payton was coming off the bench, then that unit would be a disaster.

If Payton were coming off the bench, then the only two players that can score or create in the bench unit would be Alec Burks and either Immanuel Quickley or Derrick Rose (whoever isn’t starting at point guard). One of the reasons why Payton’s weaknesses are partially hidden during several games is because he’s surrounded by the two most talented players on the roster, R.J. Barrett and Julius Randle. The presence of Barrett and Randle in the starting lineup allows the ball to be in Payton’s hands less often and hides him on offense.

Surrounding Payton with Rose/Quickley and Burks in the lineup off the bench would likely increase Payton’s role on offense by default, and therefore result in him taking more shots and the bench unit being much worse. Payton is taking 11.1 shots per game, which is already too much, but that number would increase if he came off the bench due to the fact that he would be playing less with Barrett and Randle. That’s not something that the Knicks want. In short, the Payton playing with the starting lineup results in a more balanced starting lineup and bench, rather than having a great starting lineup and a horrible bench.

Additionally, there have been times this season where Payton has been good on defense, which is something that would be a reason for Thibodeau to favor him over the others. However, the difference between Payton and Rose on defense isn’t significant, as Rose actually ranks better than Payton in defensive box plus-minus. Rose has a DBPM of 0.1 with the Knicks, while Payton is at -0.6, via Basketball-Reference. That being said, the main pro to having Payton in the starting lineup is simply to make the bench better.

The cons to having Payton in the starting lineup are that he can’t create offense, shoot, or pass. Payton is averaging 11.9 points and 3.4 assists per game while shooting 44.8% from the field and 28.2% from three. Furthermore, his True Shooting percentage, 49.6%, and his Player Efficiency Rating, 13.2, are both lower than Rose’s and Quickley’s figures.

Due to Payton’s limited shooting ability, the defense doesn’t even guard him half the time, which makes it like the rest of the Knicks offense is playing down a man. This creates less space for Barrett and Randle to operate, both players who like to get to the rim frequently.

Barrett and Randle haven’t hit their peak yet as a duo, and will likely both hit that peak when they have a point guard who can shoot from beyond the arc and distribute at a high level next to them.

Based on how each Knicks point guard is playing this season, Rose is the most deserving of being promoted to that starting role. He’s averaging 12.3 points and 3.8 assists with the Knicks in just 24.9 minutes per game. He’s also shooting 35.3% from beyond the arc on 2.6 attempts per game.

It was assumed that Rose would be a hindrance to Quickley when he was acquired by the Knicks earlier in the season, but he’s been a tremendous help to this roster. Rose’s creation on offense has been extremely impressive, as he can go get his own shot when needed, as well as set up teammates for open shots. Rose is also obviously the most experienced Knicks point guard, as he’s in his 12th season in the league. He’s also the most experienced player on the roster within Tom Thibodeau’s system other than Taj Gibson.

Derrick Rose, at the price we paid, was a HEIST

some real thieving and achieving by Leon Rose pic.twitter.com/p5o6x3Owzw

Additionally, according to NBA Stats, the Knicks’ five-man lineup of Rose with the starters is better than Payton with the starters. The five-man lineup of Rose, Barrett, Bullock, Randle, and Noel has a Net Rating of 4.4, as they have an Offensive Rating of 107.5 and a Defensive Rating of 103.1. Substitute Payton for Rose and the NetRtg is -1.0, with an OffRtg of 111.5 and a DefRtg of 112.5. This makes it clear as well that the Payton over Rose argument on defense that was mentioned before is one that isn’t backed up by numbers.

Another key stat difference between these five-man lineups is that the starting lineup with Rose has an assist percentage of 64.1%, compared to the starting lineup with Payton that has an assist percentage of 52.2%. This displays that the ball movement with Rose playing with the starters is much greater as well. This is something that’s very clear, as the spacing on the floor is better with Rose than Payton, leading to more open looks and also more ball movement.

However, pulling Rose as the leader of the bench unit would be a big blow to the team. The typical five-man bench unit of Rose, Quickley, Burks, Toppin, and Gibson has a NetRtg of 20.7, as it has an OffRtg of 115.6 and a DefRtg of 94.9. That is an incredibly good number, and when you’re gaining such a huge edge on opponents there, why would you change that.

With Payton playing with the bench unit, it’s one less creator, and the NetRtg of that unit probably goes all the way down to 0.0 or worse. The NetRtg of the starting lineup would nearly surely increase with Rose in it, but it wouldn’t increase enough to make up for the loss of him from the bench, as he’d be playing against better players if he were in the starting lineup.

Another potential concern of Rose in the starting lineup would be that he needs the ball in his hands more than Payton. While his usage percentage of 24.3% is only one percentage point higher than Payton’s at 23.3%, Rose could possibly take some shots away from Barrett and Randle, which is not something you want. However, Rose is a veteran player who knows his role, so this would be a very small concern. His absence from the bench unit would be much more significant.

The number one pro for Immanuel Quickley being in the starting lineup for the Knicks is that he’s the best three-point shooter of the trio of point guards and it’s not remotely close. Quickley’s three-point percentage is at 37.5% on 4.9 attempts per game. As a result, his True Shooting percentage is also the best of all three point guards at 54.3%.

The better the three-point shooting surrounding Barrett and Randle, the better that duo is going to be. This is shown by the five-man rotation’s Offensive Rating of 114.3 with Quickley and the starting lineup, which is the highest of any of these point guards with the other four starters.

Additionally, Quickley’s passing is better than the numbers advertised. He’s averaging 2.1 assists per game, but it’s clear that his passing is still good. Furthermore, Quickley’s threat to score off a floater could definitely open up some passing opportunities to Randle or Noel under the basket.

Another important pro of starting Quickley is the fact that he’d be getting more experience. There’s a decent chance that Quickley could be the starting point guard of the future, and that transition will be easier next season or in future seasons if he has experience in the starting lineup.

This last pro also plays into a con for Quickley. For a team that’s 29-27 and competing for a top-six seed in the Eastern Conference over the final 16 games of the regular season, starting a rookie who only has 51 games under his belt is risky.

There’s no doubt that Quickley has been great this season, but he still is very streaky. Over the past nine games, he’s only averaging 6.8 points. In the 14 games prior to that, he scored double figures in 13 of these games, averaging 14.9 points per game. With Quickley right now, you get a very high ceiling, but you also get a very low floor.

That’s not necessarily something the Knicks can afford right now, as they’re trying to avoid the play-in tournament.

If there was a time for Tom Thibodeau to make a change at point guard, the time to do it should have been well before the All-Star break. At this point, 56 games into the season, this is not a change that would be smart to make. Elfrid Payton is certainly the worst point guard of the three, but making a change this drastically while the team is on a four-game winning streak and now two games above .500 would be a mistake.

If the Knicks’ losing ways before this four-game winning streak continued, then it would have been an acceptable change to make. However, a different starting point guard and bench point guard would likely cause this team to have to adjust and that’s not something you want at this point in the season.

The massive edge the Knicks have with their bench unit is also something that is so significant that it could dictate how far they go in the postseason. That’s not something that should change right now.

All this being said, there’s absolutely no way that Payton should be on the Knicks roster next season. The ideal move would be to sign a veteran point guard such as Kyle Lowry or Lonzo Ball, and then bring Quickley off the bench and draft a point guard. If they fail to sign Ball or Lowry, they can draft another point guard, bring back Rose on a cheap one-year deal, and then start Quickley, while keeping Rose in his current role and playing the newly drafted guard in Quickley’s role from this season.

Overall, the Knicks having actual decent options at point guard on the roster is something that is a foreign concept to the organization within the last 10 years. While Payton may be starting, at least Thibodeau doesn’t frequently end the game with him, which at the end of the day, is more important than who starts.