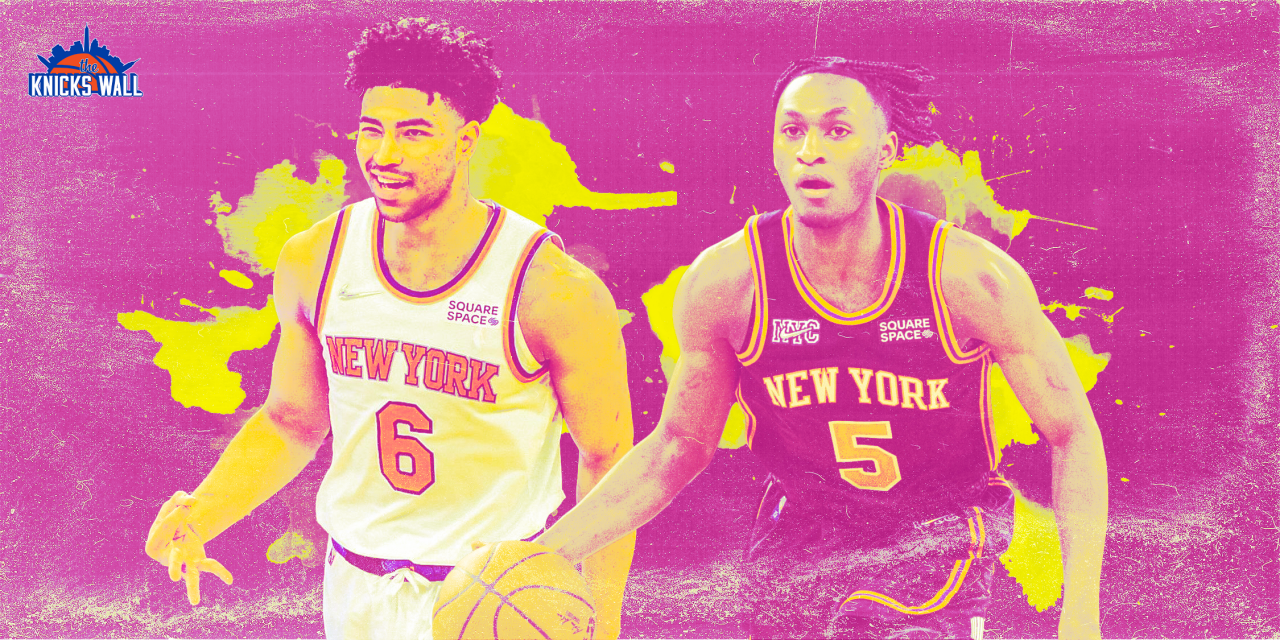 The Knicks’ guard rotation was a point of contention last season. The talent among the group still leaves the potential for it to be a strength of the team.

The New York Knicks’ guard situation is a fluid one—or at least it could be. RJ Barrett and Evan Fournier will remain in their starting roles barring substantial changes, but it’s time to look at the players backing them up. After all, there is no shortage of talent at the guard and wing positions in New York. The Knicks have a variety of players that bring different skill sets that can help the team in different ways; if appropriately utilized, their guard rotation could be devastating for the rest of the league. The bench is filled with young, hungry players and experienced veterans who can defend multiple positions and be used in different roles.

Last season, Knicks guards were plagued by the injury bug. One by one, they all dealt with some kind of ailment that sidelined them. Some of their most important players or presumed important players dealt with prolonged or season-ending injuries, the most notable being Derrick Rose, who was a godsend when New York acquired him in the 2020–21 campaign and helped propel them to a fourth seed in the NBA playoffs. This past season there was much left to be desired from coach Tom Thibodeau’s favorite weapon.

A year older and with more mileage on his body, the injuries crept up on Rose, who was missing in action most of the year. The former MVP was sorely missed after being sidelined indefinitely with surgeries in December and February. The ‘Bockers were unable to capture the same magic from their improbable run from the season before—much of which was fueled by Rose’s brilliant play down the stretch. Rose may need a reduced role next season, at least early on, to build up his surgically repaired ankles.

The Knicks’ front office also went with a low-risk, high-reward signing with the addition of native New Yorker, point guard Kemba Walker, who dealt with nagging injuries that ultimately rendered his first season in New York a mostly disappointing homecoming. In Walker’s defense, the Knicks might have put too much responsibility on his shoulders by penciling him as a starter knowing he would need maintenance days to rehab his surgeries and could not be relied upon to play in every game. Walker can still have a positive impact on his hometown team in a much smaller role that sees him play in spurts off the bench next season.

Another veteran off the bench in the stable of Knicks guards is Thibodeau’s most relied upon player last season: Alec Burks. Burks earned Thibs’ trust by stepping into many different roles as other players were in and out of the lineup for various reasons. The now 10-year NBA veteran played the most games of any Knick this past season, appearing in 81 of 82 possible contests, with the lone game missed due to the birth of his child in December. If New York doesn’t trade Burks this offseason you can be sure he’ll have a big role on Thibs’ short bench next season.

Aside from the veteran presence in the rotation, the Knicks also have a group of impressive young guards in the mix. They are headlined by fan favorite, Immanuel Quickley. The sophomore guard quickly gained favor in his first season with his impressive play and infectious charisma. But in the first half of his second season, Quickley struggled. It wasn’t until after the All-Star break that he’d start to regain his form and finish off the season on a high note.

The Knicks are once again in the market for a starting point guard, though Quickley figures to have a prominent role going forward. If the Knicks can’t find a suitable lead guard in free agency or via trade it may be time to give IQ an opportunity to start going into his third season.

New York has been good at drafting in the last few years and 2021 was no exception. Going into their sophomore seasons after some impressive performances throughout their rookie campaigns, the Knicks will be looking for Miles “Deuce” McBride and Quentin Grimes to continue their development. Deuce spent some time in the G League playing for the Westchester Knicks, where he had some eye-opening numbers, and when the big club called his number he took advantage of his limited opportunities, displaying his intense defense and play-making ability. With veterans like Rose and Walker’s statuses still unclear, McBride may have an increased role at the backup point guard spot in his second year.

Grimes, the Knicks’ 2021 first-round pick, was a consistent contributor in his rookie season; he earned coach Thibodeau’s favor, breaking into the rotation after early-season struggles from Fournier and establishing himself as a 3-and-D wing with a lethal jump shot. Grimes even set a Knicks rookie record with seven made three-pointers in a game versus the then-defending NBA champion Bucks. His ability to defend multiple positions and shoot from long range should keep him in the fold this upcoming season.

Even though the front office had what was widely perceived as a missed opportunity to add significant talent at the trade deadline for a team that clearly needed the help, New York did make a trade for former 2019 lottery pick, Cam Reddish. The former Duke Blue Devil has been injury-plagued in the early stages of his career, even coming to the Knicks during an injury stint. Still, Reddish showed flashes of being a productive player when healthy as an Atlanta Hawk.

Unfortunately, Reddish finished the season with a shoulder injury that sidelined him after early March. He will have to prove himself next season in what will be a contract year for him. His minutes off the Knicks bench were sporadic when he was available. If Reddish hopes to be more integral in the rotation he must remain healthy and produce when called upon.

New York is once again a lottery team and has the eleventh pick in the 2022 NBA Draft. If they choose to keep the pick they could add a player to their rotation that’s ready to contribute. They also have stashed 2021 draft pick Rokas Jokubaitis, who is showcasing his skills overseas, at their disposal. With the demands of an NBA season, you can never have enough guys ready to step up. The Knicks know this too well as they dealt with injuries to virtually every significant player currently on the team. Thibodeau isn’t one to stray away from his rotation, which was a point of contention amongst fans this season, but if he changes his approach he has plenty of options.

»READ: D’Angelo Russell may not be the correct, short-term fix