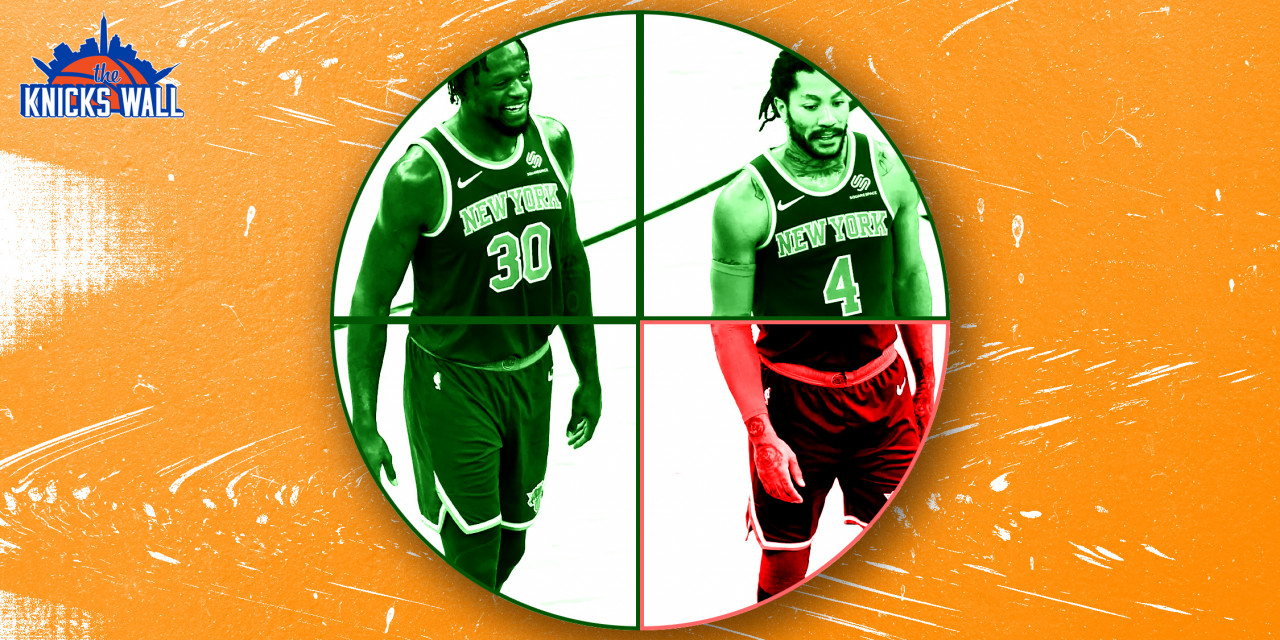 The Knicks started the season like a house on fire, but the flame has dimmed, with persistent issues coming home to roost leaving the team with questions in need of answers.

The season is a marathon and not a sprint as we are all familiar with, plus it is still early in the race. The New York Knicks have more wins than losses; however, they’ve done their best to worsen their ledger with continued fourth-quarter capitulations. 6-4 and could have been 4-6 with the ball bouncing the other way on occasion.

Fanbases are fundamentally reactionary, and there is a question of whether we throw caution to the wind. Do you simply put continued early-season problems down to growing pains for a different team, with players new and old, with roles reprised and furthered? Or is there something here to be read into, to be taken seriously?

The Knicks are far from a perfect basketball team nine games—and that’s O.K.—which means there are many deficiencies to be worked through. However, it is the fourth quarter, specifically late-game ineptitude, which comes to the forefront of the mind.

On opening night, the Knicks squandered an 11-point lead to the Celtics in the final three minutes of regulation before prevailing in double overtime.

In their first road test, the Knicks conceded a 12-0 run from the Bulls over the final 2:13 before RJ Barrett pressured DeMar DeRozan into an airball on Chicago’s game-winning attempt.

In their next outing, the Knicks had a 12-point fourth-quarter advantage trimmed to two by the Zion Williamson and Brandon Ingram-less Pelicans before Barrett again saved the day, this time on the offensive end.

It is an alarming trend, but it isn’t just playing ahead where New York struggled. In their losses this season—to Orlando, Toronto, Indiana and Cleveland—the ‘Bockers have been unable to bridge fourth-quarter deficits. On Sunday, they surrendered 37 fourth-quarter points to a Cavaliers team missing Kevin Love. When looked at from both ways, New York is unable to find a sustainable source of offense down the stretch, nor can their defense be relied upon to counteract it.

One area the Knicks have struggled mightily is when closing possessions. They simply can’t get their hands on the ball enough. New York is equal to 30th in offensive rebounds allowed in the fourth quarter, and the worst by a wide margin when it comes to defensive rebounding percentage at 64.0%. Essentially this means of every five missed shots, the Knicks are grabbing the board fewer than three times.

Consequently, the Knicks give their opponents more looks and concede the eighth-most second-chance points on average in the final frame.

In totality, the Knicks defense has been poor across the entirety of games. It seems when all eyes are on them and they’re the center of attention it seems to be magnified, fairly so as their effort is a far cry from last season.

Additionally, a worrying trend is transition defense, as pointed out by The Athletic’s Fred Katz. It has been a source of frustration for fans through the early part of the season and opponents show no sign of slowing down when the game is in the balance. New York is currently giving up 2.9 fast break points per fourth quarter, in the NBA’s bottom third among teams.

The Knicks are conceding the second-most wide-open three-point attempts and their opponents are at the moment making them pay, making 8.8 of said shots nightly which is the worst in the NBA.

Nearly seven assists by their opponents in fourth quarters alone is another indicator of the quality of looks New York is conceding, as well as their inability to close out or correctly rotate to opponents as can be seen in the eye test.

The Knicks’ interior defense around the basket in fourth quarters is league average, giving up the 14th most restricted area points. But their non-restricted area defense is immense, allowing the least number of attempts from this range. So, where are the other points coming from?

As evidenced by the inability to close possessions on the defensive glass, one may argue the Knicks are tired late in games. There is some supporting evidence in this. As MSG Network color analyst Walt “Clyde” Frazier has pointed out over the years, when players get tired, they start playing defense with their hands, not their feet.

In terms of this adage, the Knicks are doing so. They are hacking and whacking. New York is consistently in the bonus, committing on average 5.7 personal fouls in fourth quarters, equal to the ninth-most, consequently giving up 6.1 points from the charity stripe in the final frame.

The league’s best defensive team from a year ago is in desperate need to regain even an iota of that form to have a chance for success at the pointy end of this season.

Offensively, the Knicks regress significantly in fourth quarters this season, going from league-leading to underwhelmingly average.

Thibodeau’s offense ranks third in points per game and fourth in Offensive Rating overall, but in fourth quarters prior to Sunday’s loss to the Cavaliers, the ranks had slipped to 11th and 12th, respectively. As it is early in the season, the number may be slightly skewed by a pair of blowout victories, but in looking through the games New York has faltered in, there becomes a clearer picture of some issues.

The aforementioned was the Knicks’ inability to score nor to stop teams from scoring in fourth quarters, shown by their lowly OffRtg of 98.7 in games they have lost excluding yesterday’s 34-point fourth quarter anomaly against Cleveland. In these three games, they rank in the lower echelon (bottom five) of effective field and True Shooting percentage, which indicates a lack of shot-making and failure to generate high shot quality.

Further evidence to suggest this is the Knicks’ lack of ball movement in fourth quarters through 10 games. They rank 25th in assist percentage.

Julius Randle and RJ Barrett provided a steady diet of offensive responsibility late in games last season. Despite a more expanded offensive unit, the same two are again leading, or in this case, failing to lead the charge.

The lucky lefties have been rather unfortunate, being wildly ineffective and inefficient as the engine of the offense. Numerous opportunities are coming their way and often are turning into shot attempts with minimal ball movement.

Randle has struggled down the stretch in games this season, consistently trying to orchestrate the team and his own offense out of the post, which has yet to prove effective regularly.

These two alone are not the main culprits. Tom Thibodeau has had explicit trust in reserve Alec Burks who has shown to be just as inefficient or possibly more so than the Knicks left-handed duo.

With Immanuel Quickley having struggled to find the range in the young season, Burks has seen more time as the lead ball-handler to begin fourth quarters. Burks’ inefficiency shooting the ball is profound, he is registering an effective field-goal percentage of 33% and 46% in terms of True Shooting percentage, which are both the lowest marks of Knicks rotational players.

Thibodeau will need to adjust his offensive fourth-quarter strategy. His team becomes more stagnant, ranking 24th in assists per fourth quarter, which is likely a contributing factor in the considerable drop-off in terms of shooting percentages; second in overall three-point percentage to 19th (33.0%) plus 14th to 20th in field goal percentage in final frames.

While the Knicks have issues to work through there is no rush to be pulverizing the panic button just yet. New York has played champagne basketball for periods this time and it has been beautiful to watch. The roster and structure are in place for the orange and blue crew to move past growing pains but it will take a collective effort from players and coaches alike.

»READ: Evan Fourier is the key to unlocking the Knicks