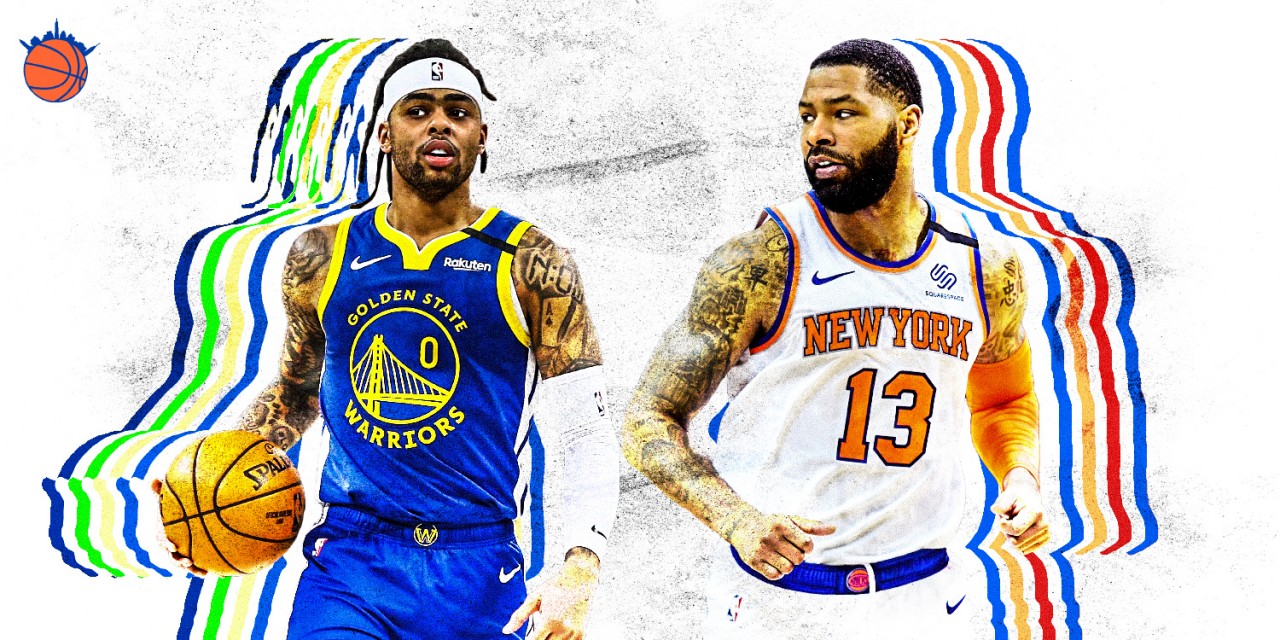 One successful trade (Marcus Morris) and another one that didn’t go through (D’Angelo Russell) characterized the Knicks at the deadline this year.

The New York Knicks were relatively content with staying pat at this year’s trade deadline, despite the fact that they’re 20 games under .500. Following the firing of President Steve Mills, General Manager Scott Perry opted to flip free-agent-to-be Marcus Morris for this year’s Los Angeles Clippers first-round pick and Maurice Harkless’ expiring deal, but this deadline may come to be known for the moves New York didn’t make.

This roster is full of veteran players on deals that either expire at the end of this or next season, as well as young prospects who have underachieved, but could benefit from a change of scenery. R.J. Barrett and Mitchell Robinson are the only two players on this roster that the front office shouldn’t have been actively making calls about. Trading Morris during a career year before his contract expires was undoubtedly the right move—even if a late first is “all” he yielded—but the reaction to New York getting something in that situation illustrates how low the bar is. Keeping Morris in hopes of re-signing him would be malpractice.

Deals for Bobby Portis, Taj Gibson, and Wayne Ellington could have easily netted New York a few second-round picks. The team does have options on all three of their deals next season, they may be planning to flip them at next year’s deadline, but most fans would likely prefer to cash out on these veterans now, rather than see them play over the so-called young core. The new front office couldn’t reasonably retain Morris, but seemingly didn’t want to fully commit to selling.

However, all of these deals were hypothetical. There was a small bidding war between the Lakers and the Clippers over Morris; we heard of no such thing regarding any other team veterans. What reportedly was discussed by the Knicks front office, was a trade for Golden State guard D’Angelo Russell.

The 23-year-old Russell has his advocates and his detractors, but after seeing what Minnesota gave up to acquire him—Andrew Wiggins, a first and a second—one’s left wondering why the Knicks didn’t try to beat that offer. They have a surplus of draft capital, a few young players who could finally blossom in the right environment, and more than enough short-term deals to make the money work.

Defensive liabilities and a propensity to chuck up inefficient long-twos aside, Russell would be the best point guard to wear orange and blue since Stephon Marbury. He’s young enough to fit alongside Barrett and Robinson going forward, and both would have benefitted from having a point guard like Russell dishing to them. Not to mention the improved spacing he would provide; Russell is shooting 37.4% from deep on 9.7 attempts a game, while the Knicks current starting point guard, Elfrid Payton, is shooting just 23.6% on 1.6 attempts per game.

So why not pull the trigger? Beyond the blemishes on court, one needs only to look at the state of the Knicks front office. Scott Perry had about two days without Mills to complete any deals, plus he’s due for a demotion this offseason with the expected hiring of Leon Rose. Despite the paltry cost, not only would he be trading away assets Rose may have assumed would be his, but he’d also be committing to Russell as the franchise point guard through 2023. In a vacuum, that may be a wholly justified move, but needlessly complicated by the franchise’s penchant for inexplicable timing. Should James Dolan have allowed Mills to retain his position through the deadline? Of course not; Morris would still be here and would leave in the summer for nothing. But the Knicks’ front-office overhaul days before the deadline was ill-timed.

The Knicks are incapable of making the good and simple decisions. As disenchanting as it seems, even a sensical move—like flipping an expiring contract to a contender—has to be preceded by some front office impropriety. At least there are good moves to speak of this time around.