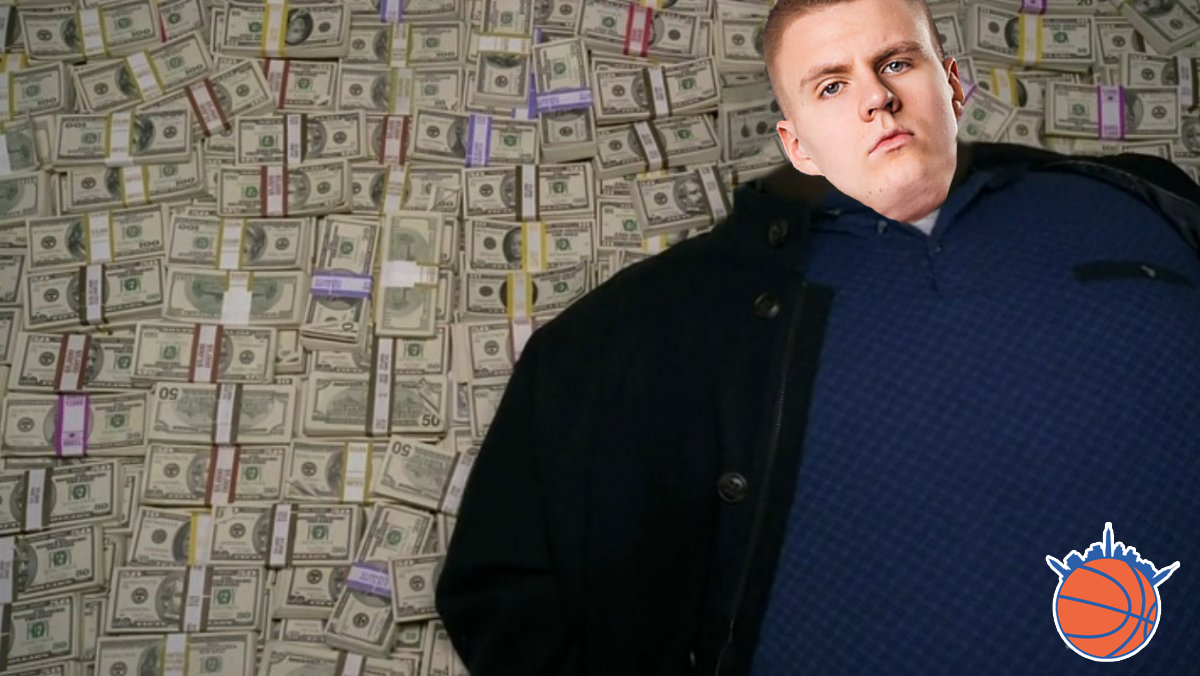 What could KP’s big contract with the Knicks look like?

Janis Porzingis made headlines in New York by hinting that his brother might not re-sign with the Knicks:

“‘The most important question here is this: What do you really want to achieve in your career? Because money — if Kristaps performs at least on his normal level — is gonna come.’ Janis Porzingis said in an interview in Latvian with Sportacentrs” (According to a translation by Eurohoops.net)

Kristaps Porzingis‘ brother is correct: money is gonna come. But how much of it, and when, depends on a variety of factors. Before we start speculating on where Porzingis will end up in the future, let’s take a look at the contract options that will be in front of him.

One thing we can feel confident about is that Kristaps Porzingis will likely demand (and deserves) a max contract in the future. We can use that as an assumption in evaluating his next move. And when evaluating contract options in the NBA, everything comes down to the criteria that determines the percentage of the cap a player can earn during the first year of a multi-year deal.

The table below outlines the contract option, maximum cap percentage of first year salary, and eligibility year for Porzingis.

If Porzingis’ goal is to maximize his earnings over his career, he would benefit from timing his contracts to end at the exact time he would qualify for the next maximum percentage of the cap. For example, if he does not sign a rookie extension with the Knicks, and decides to leave the team as an unrestricted free agent in 2020, he would benefit from signing a short-term deal (3 years with a player option) as a 0-6 year player at 25 percent of the cap, so he can then be eligible as a free agent in 2022 as a 7-9 year player who qualifies for 30 percent of the cap.

There is risk in signing short-term deals; any player can get injured. But a young player like Porzingis would probably accept that risk (given a good insurance policy) to keep his options open and to offer himself the best opportunity for maximizing his career earnings. 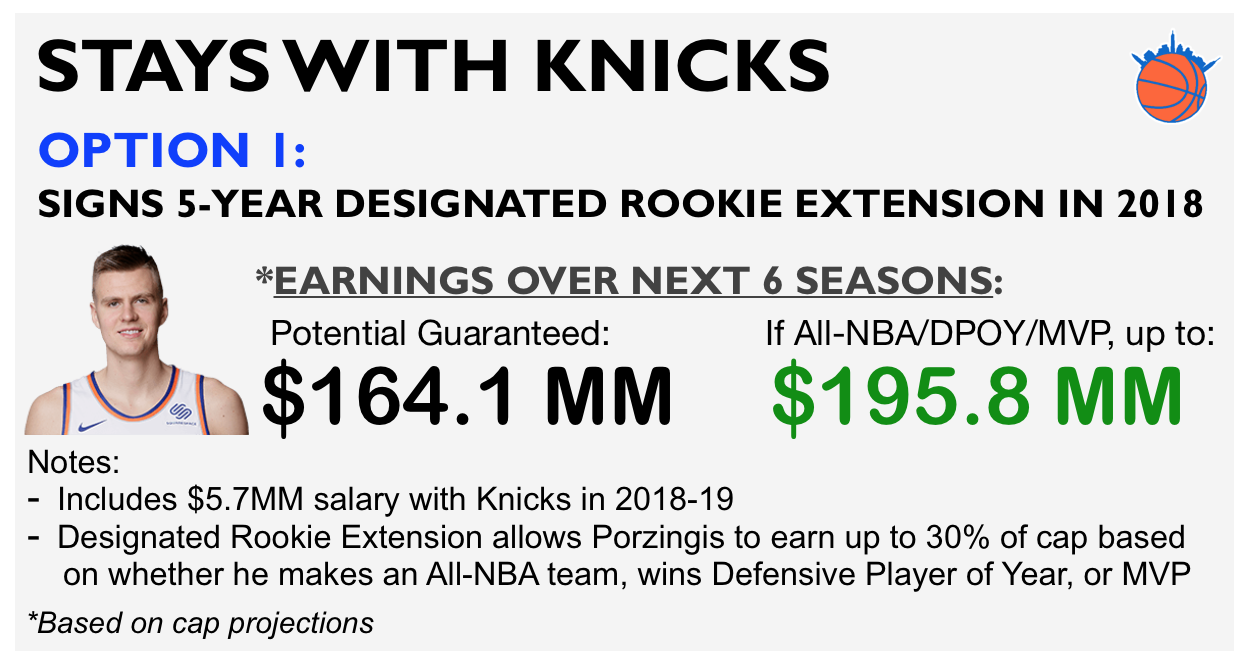 The most obvious option for the beloved Unicorn is to sign a designated rookie extension next summer. Players who are entering the fourth season of their rookie scale contract, as Porzingis will be in 2018, are eligible to sign an extension for up to six years (including the remaining year on the rookie contract).

The benefit of signing a designated rookie extension is that it offers Porzingis the ability to earn up to 30 percent of the cap before he becomes a 7-9 year veteran free agent. Under the terms of the designated rookie extension, Porzingis can earn up to 30 percent of the cap beginning in his 5th year based on whether he meets the following performance criteria during the 2018-19 season:

That puts a lot on the line next season for both the Knicks and Porzingis. It will also give us a glimpse into what Porzingis thinks of himself. If KP believes he can achieve one of those performance goals (and why wouldn’t he at this point?), it’s a safe bet to assume he signs the extension.

If Porzingis signs a designated rookie extension using the 5th Year 30 percent criteria, it must be at least four seasons (beyond the final year of his rookie contract in length). By next summer, the stress of losing Porzingis in the near future could be alleviated.

Another point to consider is the timing of when Porzingis gets paid. Under this option, Porzingis makes a hefty sum by the 2019-20 season. If he decides to wait things out to become an unrestricted free agent, he wouldn’t get his big payday until the 2020-21 season. While he could still make a lot of money as an unrestricted free agent, the time value of money tells us that the net present value of a contract with money paid in the near-term is higher than a comparable contract with money deferred to the back-end.

In short, as good as Porzingis has played to start this season, next season could be the most important one for his financial future. For Knicks fans, it is something to root for if they want the richest possible deal for their Large Adult Son. Either way, the future of the franchise would be paid nicely by signing a designated rookie extension next summer. Porzingis would be guaranteed to earn as much as $164.1 MM over six seasons (using cap projections), and if he qualifies for the 5th Year 30 percent criteria, he could earn up to $195.8 MM over the next six seasons, more money than any 0ther option that has him leaving town. 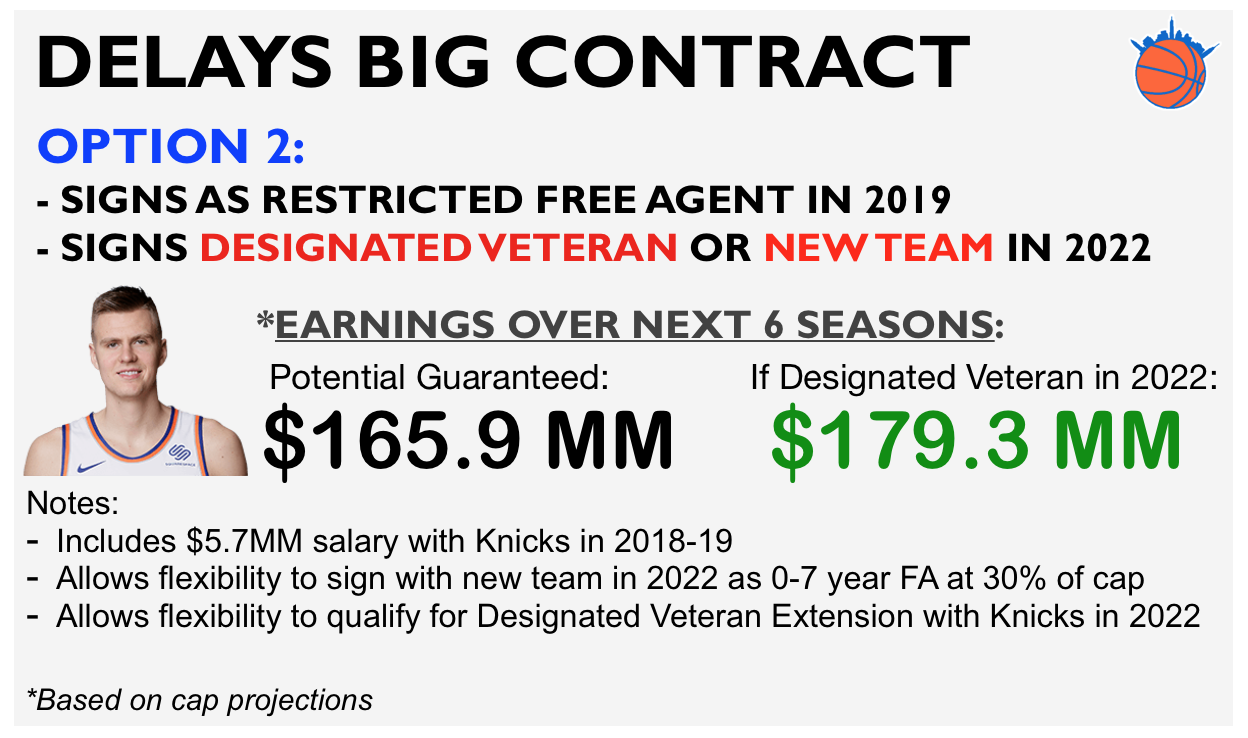 As a restricted free agent, Porzingis has the option to sign an offer sheet with a new team, but the Knicks will likely offer him a qualifying offer to keep their right to first refusal and ensure he doesn’t leave town. Porzingis could, at that point, sign a maximum qualifying offer with the Knicks for five years, at 25 percent of the cap, with 8 percent annual raises. But I don’t think he will do that. For one, a maximum qualifying offer cannot contain options; and two, Porzingis will likely want a shorter-term deal to bridge him to the time he qualifies for a larger max salary.

By signing a four-year deal that takes him past his seventh year of service in the league, KP would leave the possibility open for him to qualify for a designated veteran extension in 2022, and if not, free him early to sign with a new team when he is a 0-7 year veteran who can qualify for 30 percent of the cap.

The criteria for the designated veteran extension is the same as for the designated rookie extension, but it applies to veterans with 7 or 8 years of service and with 1 or 2 years remaining on their contract, which would be the case for Porzingis in 2022 under the scenario that he signs as a restricted free agent with the Knicks in 2019 through 2023 (hopefully, that all makes sense).

Option 3: Signs as unrestricted free agent with new team in 2020 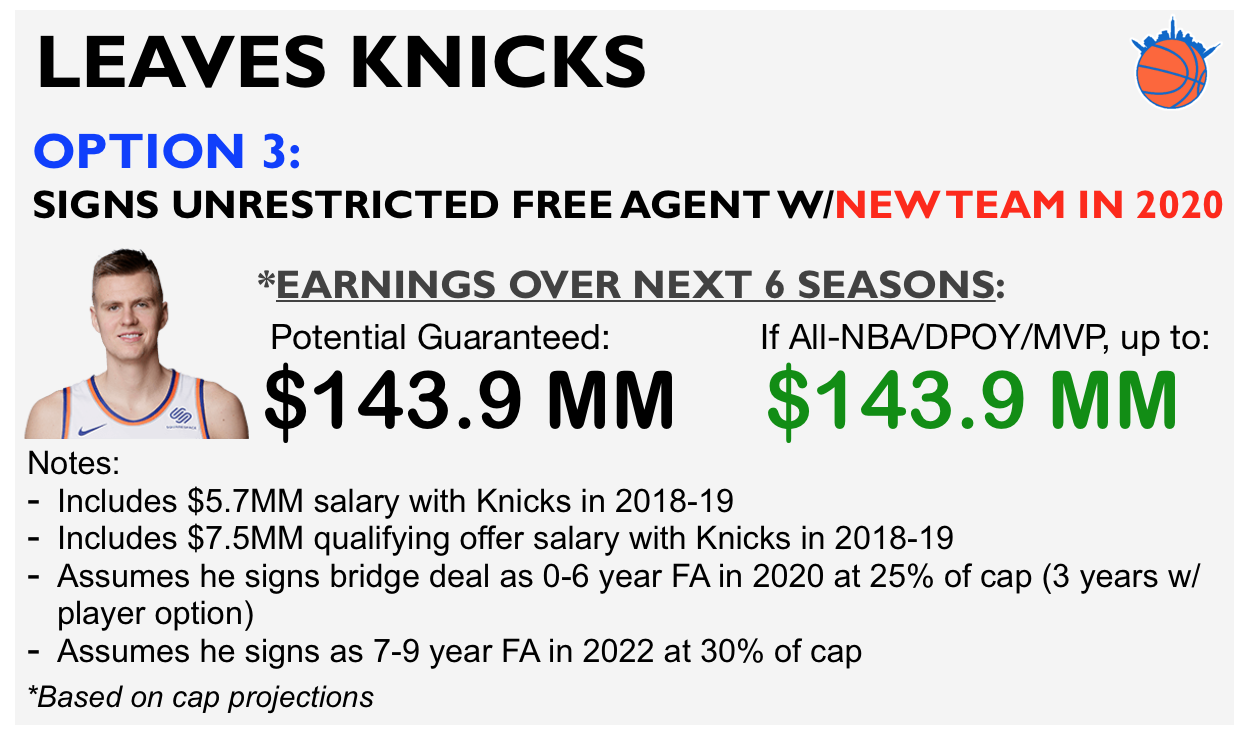 This would be the least prudent financial decision. Porzingis has one year remaining on his rookie-scale contract, and then becomes a restricted free agent in the summer of 2019. Assuming the Knicks would match any offer sheet thrown Porzingis’ way, in order to reach unrestricted free agency, the Unicorn would first need to accept the team’s original qualifying offer for one-year at $7.5 MM, and play out the season. As explained earlier, the Knicks could make a maximum qualifying offer for as many as 5 years, but Porzingis has the right to accept only the one-year amount that gives the Knicks the right of refusal on any offer sheet. The qualifying offer amount is based on Porzingis’ draft position since he will be coming off his rookie-scale contract.

Under this option, Porzingis would play out the next two seasons in New York, earning his fourth-year rookie scale amount in 2018-19 ($5.7 MM) and his qualifying offer amount in 2019-20 ($7.5 MM), before becoming eligible in 2020 to sign as an unrestricted free agent with a new team as a 0-6 year veteran for up to 25 percent of the cap. Of course, at that point, the Knicks would still hold a resident team advantage as such their offer to Porzingis could be for five years in length, instead of four, and with 8 percent annual raises, instead of 5 percent annual raises. For Porzingis, this difference probably wouldn’t matter. If he makes it as far as 2020 without having signed a long-term deal, he’s likely not going to stay in New York. Also, it makes more sense for him to sign a bridge deal to get him to his seventh year of service so he can become a free agent again when he is eligible for 30 percent of the cap.

What does this all mean to the Knicks long-term cap picture? 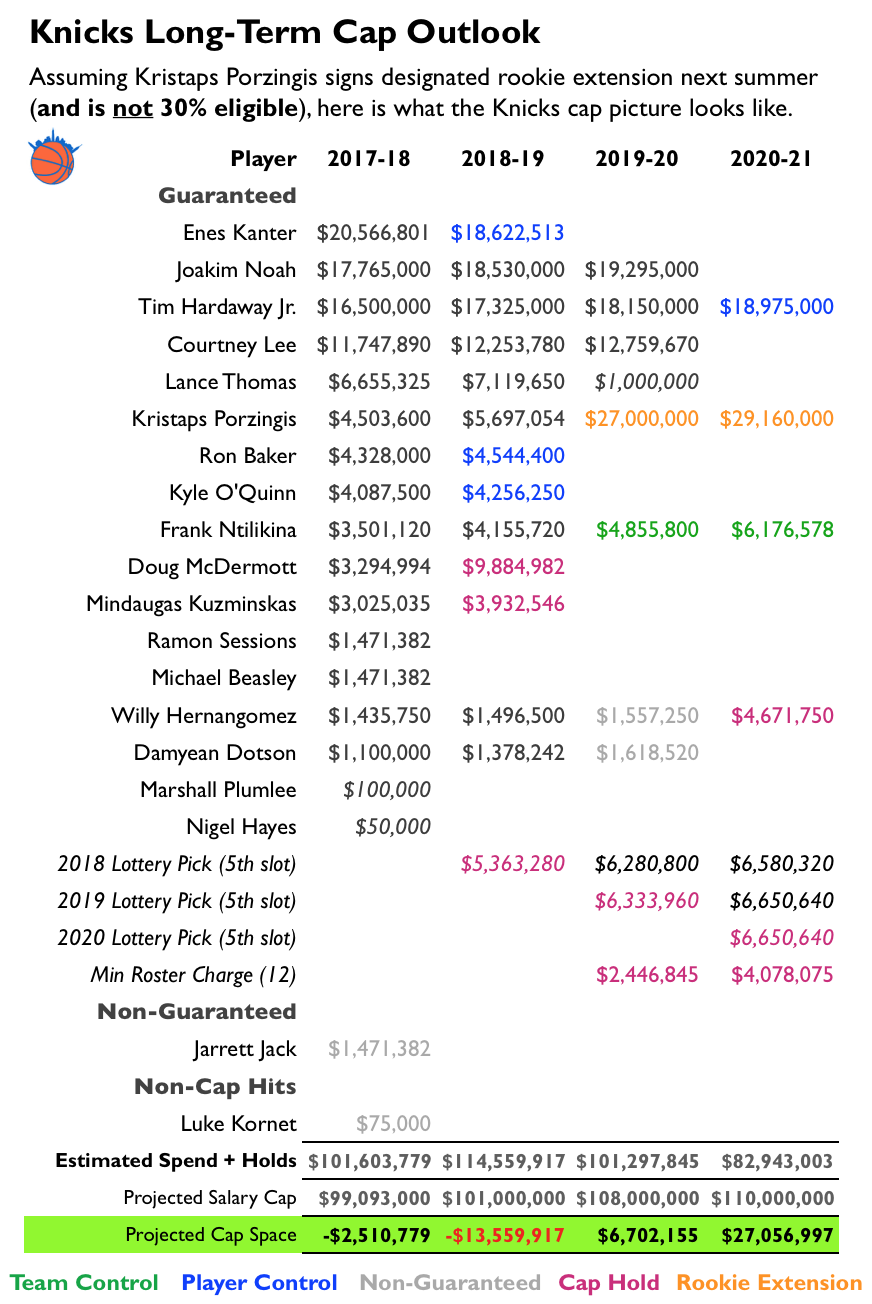 With Tim Hardaway Jr., Joakim Noah, and Courtney Lee all locked up to long-term deals, and Enes Kanter likely to opt-IN to his player option this summer, regardless of what happens with Porzingis, as the roster is currently constructed, the Knicks will have limited cap space until the summer of 2019 (although, more on that in a future post). If Porzingis does sign the designated rookie extension next summer, even if he doesn’t qualify for the super-max amount, it then leaves the team with little cap space until 2020.

A lot of information to consider, but it all boils down to this: if Kristaps Porzingis thinks he can make an All-NBA team next season, he has a great financial incentive to sign an extension with the Knicks. How the Knicks build the roster around him is the next question.