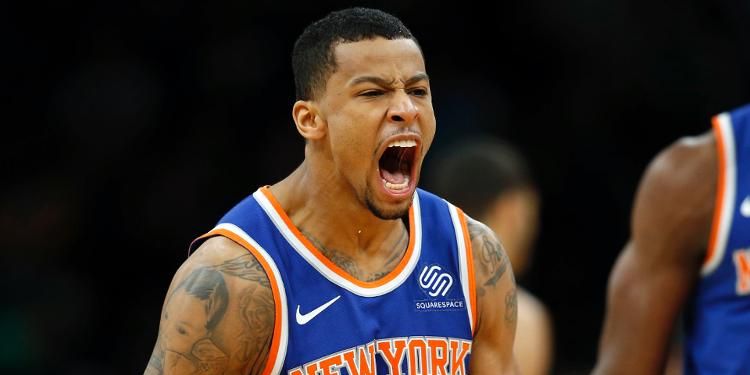 Frank Ntilikina was benched in the second half of Sunday’s contest, logging fewer than six minutes. Trey Burke, meanwhile, demonstrated value in the blowout, and questions are beginning to bubble about Ntilikina’s troubling performance.

Frank Ntilikina has started in each of the New York Knicks’ 14 games this season, but that could change soon.

Ntilikina’s performance has gone down the drain as the second-year guard struggled to find his shot or positively impact the game for his team in recent outings. While New York’s 2017 lottery pick remains an important cog in the Knicks’ future, the defensive-minded player has fallen into an icy winter of a cold spell shooting the rock. Ntilikina is shooting 29.4 percent from the field and 17.6 percent from three-point range in the last five games. In addition to poor shooting, the Frenchman is dishing out 13 assists to 11 turnovers.

“We wanted to look at something different. Frank [struggled] to shoot the ball,” Knicks head coach David Fizdale said after the game.

Sunday’s ball game versus the Orlando Magic saw quality minutes from Trey Burke. Burke signed with the Knicks before the 2017–18 season, where he went through the ranks in the G League and earned a roster spot by the All-Star break. An efficient 5-of-10 shooting performance (before garbage time) from Trey has further pressed Fizdale to re-think the long-term starting-lineup durability of Frank Ntilikina.

Heading into the final frame against the Magic, Frank had only logged 5:45 worth of court time. Where Ntilikina fell, Burke rose; the 2013 lottery pick pushed the pace for New York and attacked the basket—bending Orlando’s defense and providing ample room for the Knicks’ shooters to unload from long-range (not that the ‘Bockers could convert).

“I feel like Trey’s [Burke] role with us is to get in and get buckets,” Fizdale continued. “So I wanted to try something different.”

The head coach has continued to search for answers and try different pieces offered to him from the team’s misfit roster. Emmanuel Mudiay even played significant minutes for the Knicks on Sunday. Once banished to the end of the bench, Mudiay as emerged as a backup guard for David Fizdale—but a new question of who Mudiay is backing up has materialized. Seemingly without injury, Frank’s benching has demonstrated Fizdale is ready to pull the plug if the former eighth-overall pick is struggling.

On a night where rookie center Mitchell Robinson set the franchise record with nine blocks in one match—nearly overshadowing back-to-back blowouts—the team is still facing a crisis at lead guard. “I need to keep an open mind and be fair,” Fizdale commented on the starting lineup following Sunday’s loss. “[The] starting lineup is never set in stone anyway.”

There were zero mentions of Ntilikina’s health from the head coach, so seemingly his decision to rest Frank was made solely by the comparative performances of the guards. Despite the team’s investment in Ntilikina, perhaps a tough-love approach towards rearing the second-year player would motivate Frank. Until he shows substantial progress and shakes off shooting woes, Ntilikina is only creating doubt around the viability as a full-time starter.