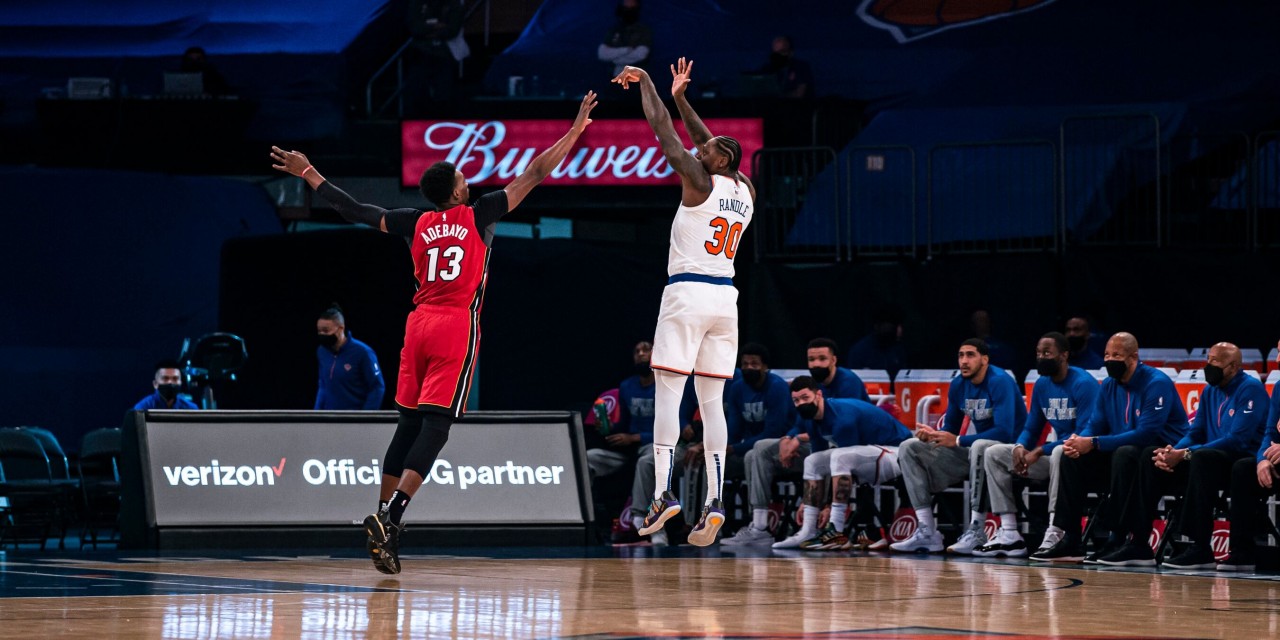 A hot offensive start for the Knicks slowed to a crawl late when it mattered most against Jimmy Butler and the Heat on Super Bowl Sunday.

After a nice little win against Portland, the Knicks had another 1 p.m. tip-off against the reigning Eastern Conference champion Heat. Both teams got off to hot starts. For the Knicks, it was the Bullock and Randle show. Randle didn’t score much early but became the orchestrator on offense, finding good shot attempts for his teammates. By the second quarter, as the shot began to fall, Randle was firing on all cylinders.

The biggest beneficiary of Randle’s creation was Bullock. Bullock finished with seven made threes, six of which were made in the first half. His ability to serve as a standstill shooter made him an easy target as the Heat defense crashed down to stop a ramparting Randle. On the other end, New York’s defense was nonexistent as Miami was getting anything they wanted. Randle’s defensive matchup, Adebayo, was also getting whatever he wanted.

Once we switched to the second half, things got slower. Adjustments were made by Tom Thibodeau and Erik Spoelstra, resulting in a much slower game. As a result, the Knicks finished with just 18 points on 6-of-20 shooting in the third quarter. Bullock’s offense dried up, while Randle began to receive doubles when he touched the ball. The Heat didn’t do anything special, but the offense, which was reliant on two players today, fell off a cliff.

The fourth quarter was much of the same—both teams playing at a slow pace. After a rather quiet three quarters, Jimmy Butler began doing Jimmy Butler things—attacking the basket and imposing his well to garner free throws. We’ll talk more about the Heat in a second, but this game came down to execution and experience and the Knicks just lacked that at the end. Even as Miami struggled to operate their offense, the defense was top notch and the pressure late in the game forced some awful shots at the end.

A tough loss, a loss in which you see where the weaknesses are. The Knicks have ways to go and slowly but surely, I imagine they’ll figure it out.

OBI SLAM TO TIE THE GAME, BENCH IS LOVING IT, TIMEOUT HEAT pic.twitter.com/EZYtjFrJrp

The Knicks travel to Miami to face the Heat to complete their home-and-home series. The game is set for Tuesday, February 9th. Tip-off is set for 7:30 pm ET.