Buying or Selling: Which Expiring Players Should the Knicks Keep? 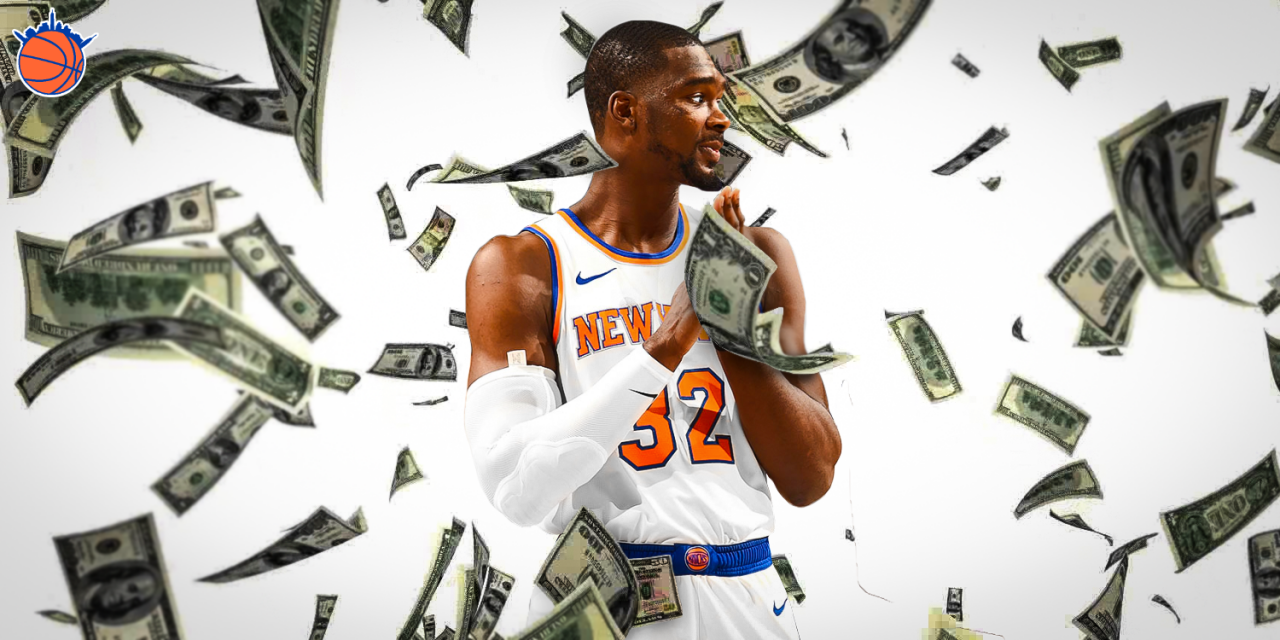 Some of the Knicks’ key players aren’t locked up for the future, but castaways could manage to stay in New York longer than expected.

Two-fifths into the 2018–19 season and the New York Knicks have the dismal record, as everyone expected. The roster is chock full of immature talent and chip-on-their-shoulder hopefuls, so the Knicks’ rebuilding method of throwing dung at the wall and seeing what sticks is well underway. At the same time, the front office has pivoted from its original goal of landing a superstar free agent.

It may seem like another completely lost season, but that’s not the case. The Knicks are in the midst of a rebuild which includes developing their young core. With Frank Ntilikina, Kevin Knox, Allonzo Trier, and Mitchell Robinson locked up for the immediate future, the Knicks are in a similar position they were in last season—lacking experienced, talented players going into the offseason.

So, what’s the best way for them to acquire talent befitting their Fizdale-headed playstyle? Steve Mills hit the nail on the head when he alluded to paying the best performing Knicks who are slated to hit the free-agency market. That’s the definitive step in Perry’s strategy of offering one-year auditions. It’s time to figure out who sticks to the proverbial wall.

Currently, the Knicks are slated to have only eight players signed for the 2019–20 season. Of the current Knicks who will be free agents this summer, who is useful to the franchise? Who fits? And who gets the boot?

Of all the players who will be free agents this summer, Emmanuel Mudiay, the seventh overall pick in the 2015 draft, is the most polarizing. His two and a half seasons with the Denver Nuggets were egregiously bad with no signs of improvement. So, when the Knicks front office made the call about acquiring him, the Nuggets couldn’t get him out of town fast enough. His first half season as a Knick wasn’t much of an improvement, but you need only do your googles to find out just how far he’s come in such a short time.

His hot November was a welcomed surprise and his steady play since is encouraging. Over his last 10 games, Mudiay is averaging 18.6 points and 5.5 assists on 46.7 percent shooting (via NBA Stats). He’s also averaging 6.3 points in the paint this season, a high for his career—granted anything was a step up from the horrific finishing he had for three years prior. His passing can’t be overlooked though. Finally coming into his own, Mudiay’s passing is quietly the best on a stagnant team. The Knicks desperately need a consistent distributor on the floor. Here he makes a quick pass out of a burgeoning trap to fellow second-chancer Noah Vonleh.

It’s a simple read, but it’s indicative of his willingness to make easy reads. Still, Mudiay is not without his flaws. Although his pace is up to 103.4, the highest of his career, he’s averaging only 3.7 assists for the year and his Defensive Rating (DRtg) is a subpar 112.8. Plus, his three-point shooting is 31.7 percent, well below the league average. He still has a long way to go if he is going to be the Knicks’ point guard of the future.

It’s unclear what amount of money he’ll command in free agency, but it’s highly likely most teams won’t be sold on this new-and-improved Mudiay, even if it does extend to the end of the season. This may work in the Knicks’ favor if they wish to retain him for a price that only takes a chip of cap space.

Buying: At this point, I’m buying Mudiay stock. I believe his current output is sustainable, and, as strange as it sounds, the fact that he has a few not fantastic games under his belt is encouraging—it shows he wasn’t just simply on a hot streak. This is who he is.

It’s ironic how Trey Burke’s path mirrors Mudiay’s. When he came aboard the Knicks after a stint in the G League he took the team by storm. In his first 36 games, he averaged 12.8 points, 4.7 assists, and 2.0 rebounds while shooting 50.3 percent from the field. Since then, however, it’s been a garbage fire for ya boi.

Standing only 6-foot-1, Burke has as much trouble on defense as any other guard on the roster with a 110.6 DRtg. The defensive assignments for point guards are among the toughest in the modern, guard-heavy NBA. A height disadvantage further exacerbates the problem for Burke.

Admittedly, Burke has tried to adjust to Fizdale’s offense. He’s shooting 2.7 three-pointers a game and making 35.4 percent of them. It’s a higher average than Mudiay’s, but it appears that shooting is about the only thing Burke definitively can bring to the table. If any part of his scoring his off he becomes a liability.

Selling: Burke is 26 years old and entering his prime. Trying to fit into Fizdale’s offense while sharing minutes with players labeled as prospects shouldn’t be how he spends the best years of his career. Nor is it what the Knicks should back up their young guards with. If the Knicks want a backup or third-string guard to round out the roster, they’d best pick up a veteran with a little bit in the tank. Burke’s a marginal player on a bad team, which is not a good sign, but he could be effective scoring off the bench for a playoff-level team. All Burke really needs is a green light—too bad the Knicks are looking to build a consistently competitive team instead of just picking up a piece for their contender.

Selling: Shoot this man into the sun.

A journeyman at 23 years old, New York is Vonleh’s fourth team in five seasons. Besides a loose string of highlights, the forward never quite hit his stride.

This has not been the case in New York. A replacement for Joakim Noah on the depth chart, Vonleh has easily been the superior Noah in the Big Apple. So far, the only parties Vonleh gets notoriety for are the block parties. Averaging 1.0 block per game, he’s clearly the most reliable defender for the Knicks. When it comes to the eye test, second place isn’t even close. The man spent the Christmas season spiking Giannis Antetokounmpo’s shots like a volleyball.

Embellishing jokes aside, the highlights are only icing on the cake. Of Knicks currently on the roster, Vonleh has the highest net rating. He takes the tough assignments and, at times, even excels at them. Serious and passionate, he can fire up the crowd with just about anything. This season he’s averaging 8.6 points and 8.6 rebounds to go along with the single block. Furthermore, his ability to handle the ball gives him another dimension. Much like Draymond Green, Vonleh can push the ball after corralling a rebound, putting the defense on its heels even if it doesn’t end with a transition jam.

His shooting has been a big help to the Knicks as well. So far he’s shooting 47.2 percent from the field and 39.2 percent from three. Vonleh could also be a good fit next to Kristaps Porzingis since he can space the floor for a five-out offense and is athletic enough to drive to the basket. The 2.2 assists he averages could also rise if Porzingis is the receiver of his lightning-quick dishes. More data is necessary to clearly determine if his output is sustainable, but he’s earned the benefit of the doubt.

Buying: Noah Vonleh has been a pleasure to watch this season. He’s making waves and showing that he’s more than a journeyman to be passed around the league like a can of whippits. Most likely, he’ll be able to command a decent amount of money in free agency. And for good reason, he adds a lot on the floor and has the presence of a fiery, competitive basketball player. In my opinion, I’d consider offering him Courtney Lee money, if the Knicks can move the guard. If not, as Steve Mills said, he’ll have some tough decisions to make.

Kanter’s heel turn into a Knicks villain was prophesied as soon as he exercised to his player option this past summer and returned to the team. A consummate post scorer, the Knicks knew what they were getting and just now have an extra year of it. He’s largely been the same as he was last year. Kanter’s output is exactly what you think it would be. He’s averaging 14.7 points and 10.8 rebounds on 55.1 percent shooting. Those numbers are great, but looking past them, it turns out he’s simply the beneficiary a very weak team.

While he’s an efficient, consistent scorer and rebounder with offensive rebounding prowess (he averages 3.9 offensive rebounds per game) he does little else. Kanter’s attempting to carefully extend his game to the three-point line, but that’s not the weakest part of his game. His DRtg is an abysmal 113, among the bottom three on the team (per NBA Stats). The eye test will tell you the same thing. To further illustrate how bad of a defender he is, look at his defensive field goal percentage of 53.9 percent (per NBA Stats). Players have a greater chance of making a shot than missing it when Kanter is defending them. His defense is so poor it’s like a curse or a crippling penalty in an RPG.

He’s not a great or willing passer, and teams take advantage of this weakness. As soon as he receives the ball in or simply near the paint all 10 players on the court know he’s not giving it up. Teams have taken notice and now target him. Instead of finding the open man, he manages to strong arm a shot up and shout “oh my god” before the defense corrals the rebound. Kanter does what he does well, but in this NBA it’s simply not enough if it doesn’t involve your teammates.

Selling: Kanter may be one of the best post scorers in the league, but his selfishness on offense, ineffectiveness on defense, and general attitude about the rebuilding process shows me that even if the Knicks wanted him, he wouldn’t want to be here. He shouldn’t be here. I’d feel sadder thinking about Kanter leaving if he’d shown growth on defense as opposed to trying to add another level to his scoring that doesn’t impact the game in a discernible way. He’ll be an expensive free agent this summer and all signs point to both the Knicks and Kanter going their separate ways.

Scott Perry’s approach to rebuilding has the Knicks’ roster full of first and second-year project players and a few down-on-their-luck contributors. Fizdale’s done a decent job making sure everyone gets a shot at breaking into the rotation and a couple of these reclamation projects have proved that they belong in the NBA. A few others? Not so much. The Knicks have struggled with continuity, so keeping solid role players on the roster would be in their best interest, along with severing ties with those who haven’t played favorably. The NBA regular season is about 40 percent over, and if things continue as they have, the Knicks will have some interesting decisions to make in free agency, superstar arrival or not.