Buyout Candidates for the Knicks to Replace Kemba Walker 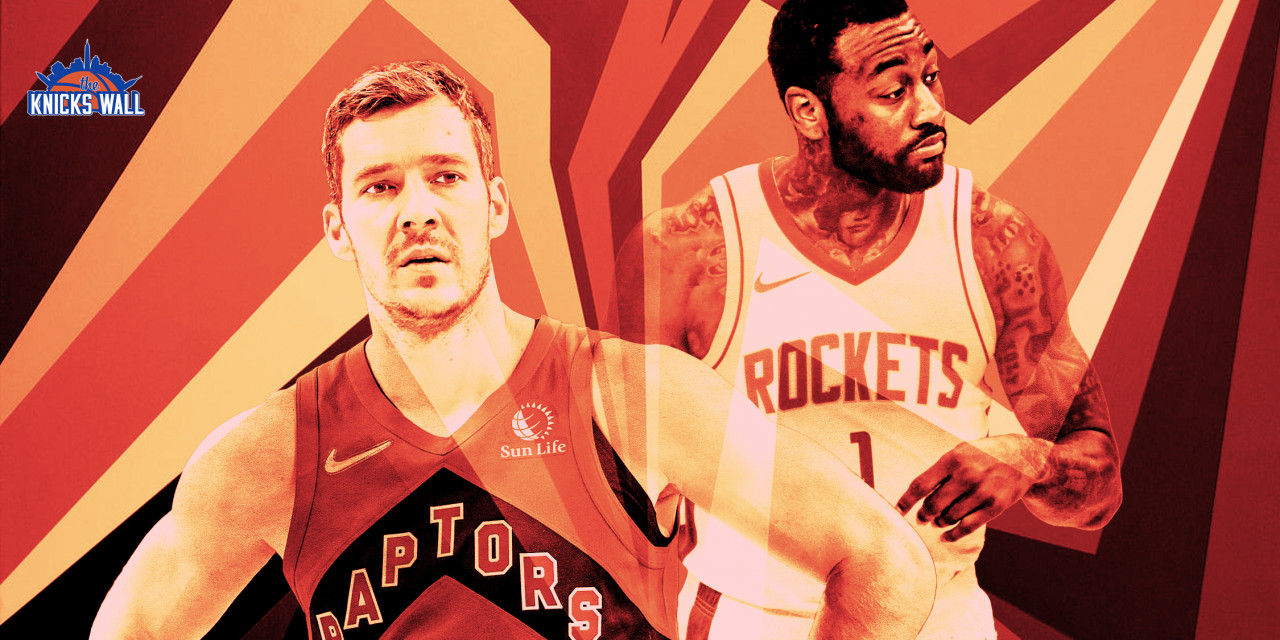 With several players becoming buyout candidates following the trade deadline, the Knicks ought to look into one to replace Kemba Walker.


Well, the NBA trade deadline came and went, and the New York Knicks made the decision to stick with the team they have. Aside from the exchange for Cam Reddish more than a month ago, the Knicks front office decided that the best path forward was with the roster at hand. However, they did not dismiss the chance to upgrade when necessary.

“I trust Leon [Rose], [William] Wes[ley], Scott [Perry],’’ said head coach Tom Thibodeau on Thursday prior to the deadline. “They’re doing what they need to do. They’re up constantly studying opportunities. If something makes sense that they feel can improve the team we’ll do it. If it doesn’t make sense we won’t do it. They do it all year round. There’s more focus because of the deadline. That’s what they have to do. If they get close on something they’ll talk to me about it. but it’s time of the year you’re looking at all the possibilities.’’

The point guard market is definitely worth diving into for the Knicks, as Kemba Walker has given them essentially nothing over the past month of starting games. He hadn’t scored in two games straight at one point, and it’s often a struggle for him to reach double-digit points. His explosiveness just isn’t there any longer, or his fit within this offensive scheme is just entirely wrong. So, with several point guards with different skill sets available, here’s who the Knicks ought to give a look to replace the veteran.

Dragic, the 35-year-old Slovenian and one-time All-Star, was traded from the Toronto Raptors to the San Antonio Spurs on Thursday. He had been disinterested in playing with the Raps, appearing in just five games before leaving the team. The Spurs have already said they plan on buying Dragic out, allowing him to be signed by the team of his choice. He’s expected to have interest with the Dallas Mavericks, but the Knicks should still do their due diligence on him.

Unlike Walker, Dragic has been healthy throughout his career and would be able to provide steady minutes for the Knicks. In his last season with the Miami Heat in 2020–21, he averaged 13.4 points per game on 43% from the field and over 37% from three-point range. He does a lot of the same things Walker does, as he is much better suited with the ball in his hands driving to the basket than as a passer. Seemingly healthier, and with about a half a season of rest under him, Dragic could be much more explosive and effective in Walker’s role.

Wall, the 30-year-old point guard on the Houston Rockets, has been a buyout candidate for a couple of years now. The concerns with him are obvious, as no one knows where he stands health-wise. The five-time All-Star’s left knee is a big unknown, and he has yet to play since about a year and a half ago. In the time Wall did play with the Rockets last season, he also seemed to be missing a step following his Achilles injury with the Wizards that forced him to miss a year of action.

It’d be a gamble for sure, much like the one the Knicks are already taking with Walker. Wall would require a VERY slow ramp-up if bought out and signed by the Knicks, probably not playing more than a handful of minutes per game. It certainly wouldn’t be a long-term solution to the point guard dilemma, as the Knicks’ only other option is the already-injured Derrick Rose. If Wall is bought out, his best fit would likely be on a team with the time to nurture the guard back to health.

He did show some promise in his 40 games played with the Rockets last year, averaging 20.6 points and 6.9 assists per game. Wall would be a refreshing change as he provides more of a passing game, but his offense is predicated on his explosiveness to the rim. If that is gone, he offers a lot less as a player than he once did. If it’s still there, though, the NBA could get back one of its most exciting players over the past decade.

Schröder, signed to the Boston Celtics on a bargain at $5 million this offseason, missed out on a big payday with the Lakers after rejecting a four-year, $84 million extension with them. On Thursday, he was traded to the Rockets along with Enes Kanter Freedom in exchange for Daniel Theis. While the Rockets hadn’t said anything yet, the expectation is that they will buy out the rest of Schröder’s contract and make him a free agent.

The Knicks should definitely weigh in on Schröder, as he would be the youngest option available at 28 years old. Playing nearly 30 minutes a game with the Celtics this season, Schröder has averaged 14.4 points and 4.2 assists per game on shooting splits of 44/35/85. He’s also the healthiest of the bunch, with his lowest number of games played being 49 in his rookie season.

Schröder does a bit of everything as a point guard, profiling as both a driver and a long-range shooter. He is an adept passer and ball-handler and gives plenty of effort on the defensive end. He is someone that would help the Knicks both in the short term, as well as potentially be signed to a longer deal to help push the team further toward playoff pushes.

While those are some of the top targets, there are several other players in the buyout market the Knicks can consider. Eric Bledsoe, for example, could be bought out following his trade from the Clippers to the Trail Blazers. The 12-year NBA veteran doesn’t offer much of an offensive profile but is a stalwart defender that would be an upgrade at the position from Walker in that aspect. Across 54 games played with the Clippers this season, Bledsoe averaged 9.9 points and 4.2 assists to go with 1.3 steals per game.

DJ Augustin, a career 38% three-point shooter over his 14 seasons amassed, would be a decent spot-up shooter option at the point guard position should he be bought out by the Rockets. Tomas Satoransky, included in a trade to the Spurs, is another buyout option. He’s struggled mightily as a shooter with the Pelicans this season, only shooting 30% from the field. Satoransky has averaged 47% from the field and over four assists in his six-year career, though, so it’s possible he could refind that with a change in scenery.

Whatever the Knicks decide to do is entirely up in the air, however. Since they decided to not make a move at the trade deadline, maybe they’re entirely comfortable with how things are. With the return of Derrick Rose imminent, Thibodeau may be confident handing him the keys in the starting lineup and sidelining Walker once again. Or, perhaps they just see Walker in a slump that he will break out of soon.

Either way, the Knicks are going to need something to change to get going following the All-Star break, as they’ve lost six of their last 10 games now. Walker’s seat in the rotation is most definitely hot, and the buyout market just might be how the team addresses it.